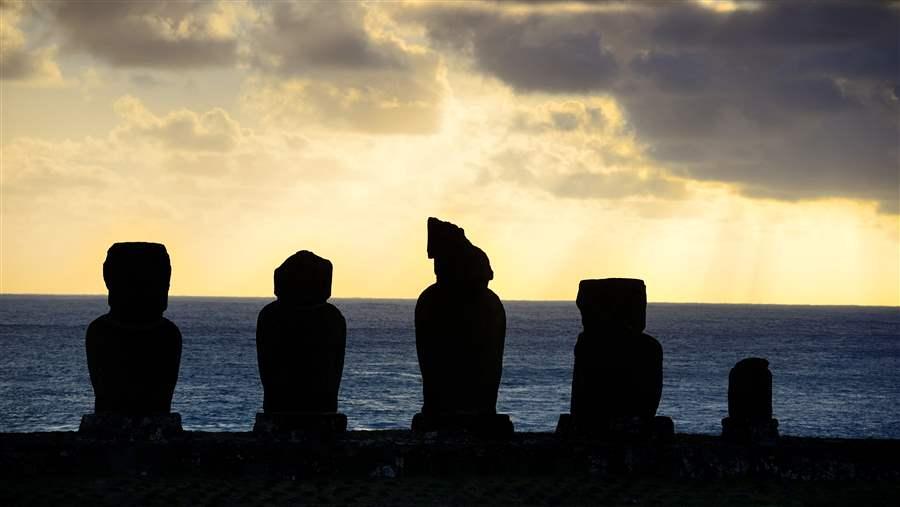 Seven female artists from Easter Island—or Rapa Nui, as the island, its indigenous people, and their language are known—showcased traditional artwork at a reception Sept. 4, 2014, at the Chilean Embassy in Washington, D.C.

Located in the southeast Pacific Ocean about 4,000 kilometers (2,500 miles) west of the Chilean mainland, Easter Island's waters are known to contain geological hot spots and areas of rare biodiversity. Highly migratory fish species take refuge among seamounts that are millions of years old.

The exhibition, which was organized by the Embassy of Chile, The Pew Charitable Trusts, and the Rapa Nui’s Women’s Shore Gathering Association, features traditional handicrafts made from the endemic pure snail (pronounced poo-reh), or “dragons” head cowry shells.  It also includes photographs by Chilean photographer Eduardo Sorensen that show the great diversity of Easter Island’s underwater life.

At the reception, Chilean Ambassador to the United States Juan Gabriel Valdés, Pew’s senior director of international oceans Karen Sack, and two of the Rapa Nui female artists spoke about the importance of the exhibition.

In her remarks, Sack described Easter Island’s vibrant marine life, noting that it is “one of the most outstanding marine environments in the world, home to numerous endemic and threatened species, as well as fragile ecosystems like seamounts and hydrothermal vents.”

She emphasized the importance of working with local communities around the world to protect our oceans. “Ocean conservation, when driven by local communities to secure their well-being, is inspiring and energizing,’’ Sack said.  “We are very pleased to be working with organizations and people, like our ‘sisters’ here from Rapa Nui, to promote marine protection.”

Pew’s Global Ocean Legacy project has been collaborating for three years with the Rapa Nui community, Chilean authorities, and scientists to identify the best way to protect Easter Island’s waters from threats such as illegal, unreported, and unregulated fishing.

Uri Erisa Tuki of the Rapa Nui Women’s Shore Gathering Association challenged the world to protect a marine habitat “that provides the livelihood for the women of Rapa Nui who are mostly fisherwomen, gatherers, and artisans.”