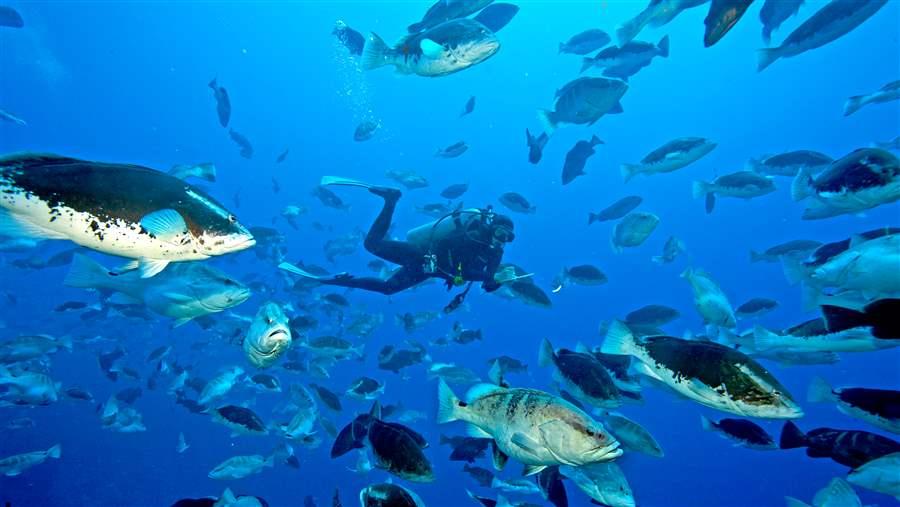 Some fish, like these Nassau groupers in the Cayman Islands, travel to their spawning places to reproduce. It is an event rarely witnessed.

Yet beneath the water is the foundation for much of what people enjoy at the surface. Underwater mountains, corals, and canyons are habitat for marine life ranging from turtles to whales. Within parts of these deep-sea cities are some of the best fish breeding grounds. Protecting these places ensures abundant fish and healthy ecosystems that in turn support strong coastal economies and tourism. Click here to help us protect these places.

That is why Caribbean leaders are hosting a public meeting on July 18 in Mayaguez, Puerto Rico, to discuss a plan to better protect these special underwater marine environments. Currently, three areas known as Abrir la Sierra, Bajo de Sico, and Tourmaline—about 44 square miles combined—have rules that restrict some fishing during seasons when fish are there to reproduce. 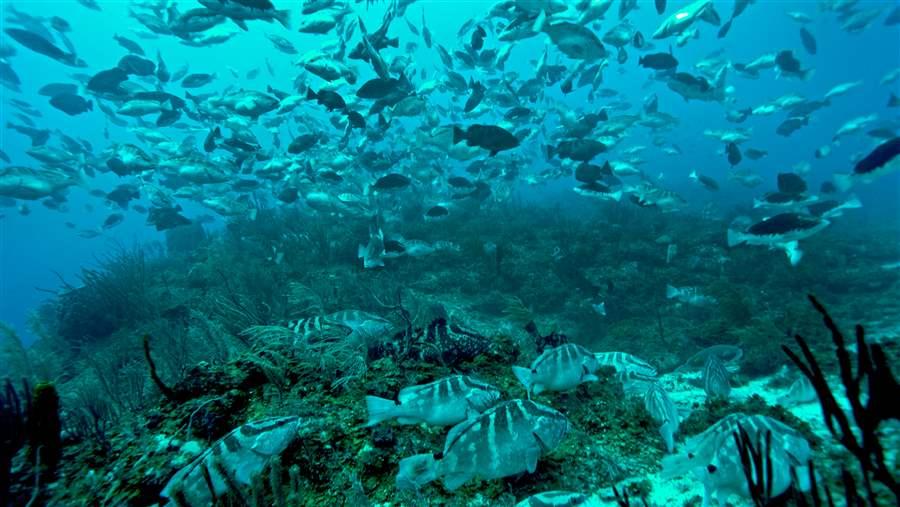 Some fish, like these Nassau groupers in the Cayman Islands, make an epic journey to special places to spawn. Protected areas off western Puerto Rico could help spawning fish boost their populations.

But the regulations vary among the three locations, making them hard to enforce and confusing for fishermen.  Stronger, more consistent measures are needed to adequately protect spawning fish and fragile corals.

The Caribbean Fishery Management Council is considering enacting similar rules among the three areas and expanding the amount of time when fishing would be prohibited each year. Those changes would accommodate the different species that travel many miles to gather at these three locations to spawn between December and May.  In addition, the council is considering prohibiting boats from anchoring in the areas year-round to protect fragile coral reefs.

Several important kinds of groupers and snappers would benefit, including the Nassau grouper at Bajo de Sico, which is endangered, according to the International Union for Conservation of Nature. Recent research shows that these iconic fish spawn in April and May, but the current four-month fishing restrictions are in place each year only until March 31, leaving the fish vulnerable to being caught when they should be left alone to reproduce.

Protections for spawning sites are a proven way to boost healthy fish populations and help the recovery of declining species. In some spawning areas where fishing has stopped, fish have grown larger and more numerous, and their populations have expanded over a wider area, replenishing nearby fishing grounds. Fish in these areas also produced greater numbers of eggs that were more likely to survive and hatch. Additional species are attracted to this abundance, so food webs grow more robust.

The Caribbean Council is expected to make some preliminary decisions at a meeting in August, and final approval of a plan could occur in December.

Taking care of what happens below the water has a major impact on many things above it. Protecting important places means we are preserving our resources—on land and sea—for future generations.

If you want to help, please sign the Sierra Club's petition.

Additional Resources
Watch the episode “Seamount of Life” on public television’s “This American Land” to learn more about Bajo de Sico. Experience the filming of the episode and meet the experts in the show.
Authors