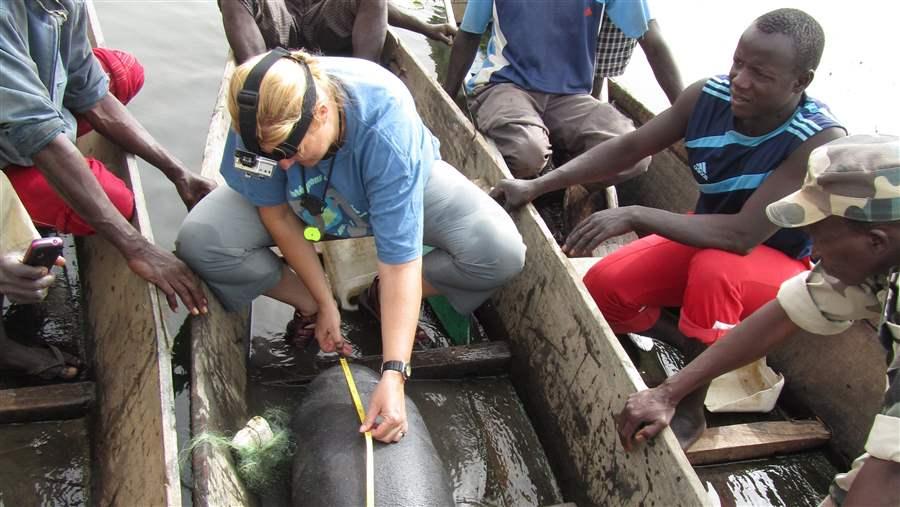 Lucy Keith-Diagne, demonstrating standard measurement techniques to trainees during the rescue of an African manatee calf in Guiers Lake, Senegal, will collect essential information on African manatee populations in Central and West Africa.

Coastal conservation of the African manatee in West and Central Africa

Lucy Keith-Diagne, Ph.D., is the founder and executive director of the African Aquatic Conservation Fund, which supports manatee conservation programs throughout West and Central Africa. She has trained more than 90 people from 19 countries in manatee conservation and has established a network to encourage ongoing research and collaboration across the region.

African manatees (Trichechus senegalensis) face significant threats throughout their range, which extends along Africa’s western coast from southern Mauritania to central Angola. The species is believed to be in decline, but reliable data on its distribution, biology, and ecology are scarce. Although all of the countries where African manatees can be found have laws to protect them from hunters, those conservation measures are not effectively enforced. The species is also susceptible to incidental bycatch by artisanal fisheries.

Keith-Diagne will use her Pew marine fellowship to collect much-needed data on manatee population genetics, ecology, and health and to measure species mortality associated with illegal hunting, incidental taking, and coastal development across six countries in Central and West Africa: Cameroon, the Democratic Republic of the Congo, the Gambia, Guinea-Bissau, Nigeria, and Senegal. She will work with conservation groups and local stakeholders to establish protected areas and build research and management capacity among African conservationists. Keith-Diagne will also seek to create alternative livelihoods for individuals engaged in manatee hunting by establishing programs that retrain them as fish farmers and as rangers for manatee reserves.

To learn more about Keith-Diagne, read her bio.

Submit an update to this directory entry for Lucy Keith-Diagne, Ph.D.