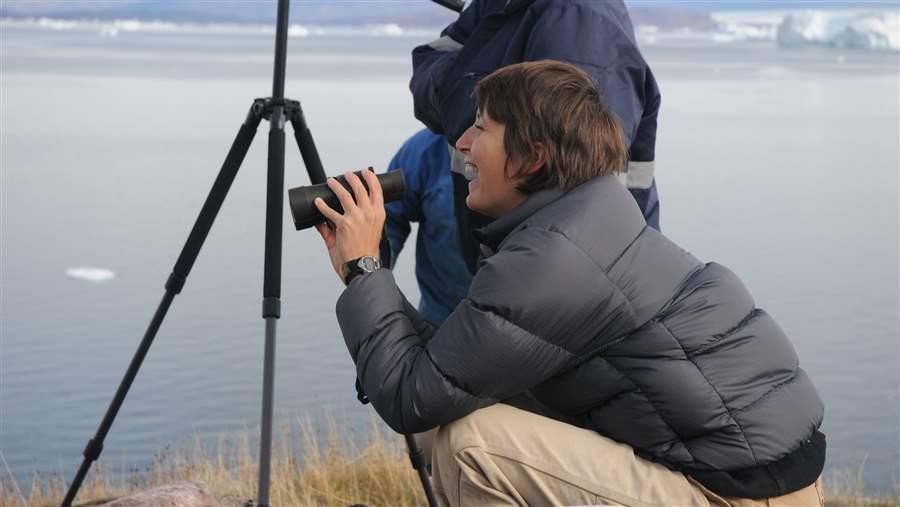 Kristin Laidre is working to understand the effects of climate change and subsistence hunting on polar bear populations.

Kristin Laidre, Ph.D., tracks the movements, foraging behavior, and life history of the Arctic’s top predators. She has spent more than 15 years studying the ecology of cetaceans and polar bears.

In recent decades, the Arctic has warmed at nearly twice the rate of the rest of the planet, and loss of sea ice poses a serious risk to polar bears (Ursus maritimus), which use sea ice as a platform to hunt seals. In addition to their role as top predators in Arctic food webs, these iconic mammals are an important nutritional, cultural, and economic resource for indigenous people throughout the region. Polar bear conservation will require a balance between ensuring science-based management to protect populations threatened by climate change and meeting the needs of communities that interact with and depend on polar bears.

With her Pew marine fellowship, Laidre will develop standardized metrics for polar bear population health that can be used in conservation assessments, such as under the U.S. Endangered Species Act. She also will combine analyses of scientific data with findings from interviews with indigenous communities to better understand the interacting effects of climate change and subsistence hunting on polar bear populations. Results of this work will be presented at meetings of specialists from the five Arctic nations: Canada, Greenland, Norway, Russia, and the United States. Finally, Laidre will create an art-science exhibition that combines imagery, data, and local perspectives on polar bears to raise public awareness of how climate change is affecting humans in the most remote parts of the globe and how the conservation of this iconic species is intricately linked to indigenous culture and livelihood.

To learn more about Laidre, read her bio.

Submit an update to this directory entry for Kristin Laidre