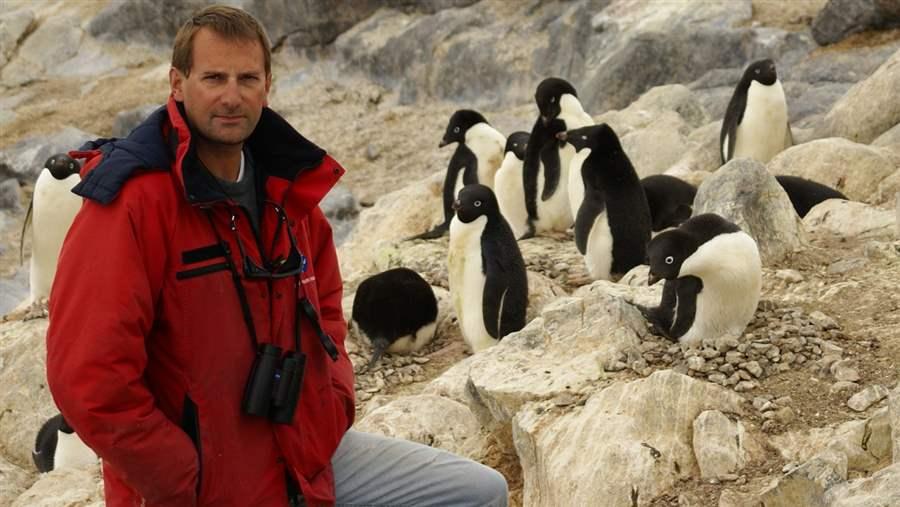 Yan Ropert-Coudert will investigate whether Adélie penguins, like those pictured above, can use jellyfish, sea salps, and comb jellies as alternative food sources as their traditional prey species declines with increased ocean warming and acidification.

Are jellyfish a potential food source for Antarctic predators? Prospects for a Southern Ocean with few krill

Yan Ropert-Coudert, Ph.D., studies the behavior of top predators at Earth’s poles to detect subtle changes in the dynamics of marine food webs.

Antarctic krill are small, shrimplike animals that play a central role in Southern Ocean food webs by supporting populations of penguins, fish, seals, and whales. Studies have shown that krill are sensitive to ocean warming and acidification and could decline as these trends intensify. In addition, scientists are increasingly concerned that rising temperatures may result in the replacement of krill populations in certain areas by gelatinous organisms, such as jellyfish, sea salps, and comb jellies, which have begun to predominate in some marine ecosystems. To date, little is known about the role that these organisms play as prey in the marine environment.

As a Pew marine fellow, Ropert-Coudert investigated whether the complex gelatinous community in the Southern Ocean could serve as an alternative food source for krill-dependent species should such a transition occur in the region. He focused on monitoring the foraging activity of Adélie penguins, a threatened Antarctic species that relies primarily on a diet of krill. This dependence makes them a useful gauge of ecological changes occurring within the system. Using a combination of observation and analysis of long-term datasets, Ropert-Coudert looked for changes that would likely occur in the Antarctic food web if its prey base shifts from krill to one potentially dominated by jellyfish.

To learn more about Ropert-Coudert, read his bio.

Submit an update to this directory entry for Yan Ropert-Coudert, Ph.D.