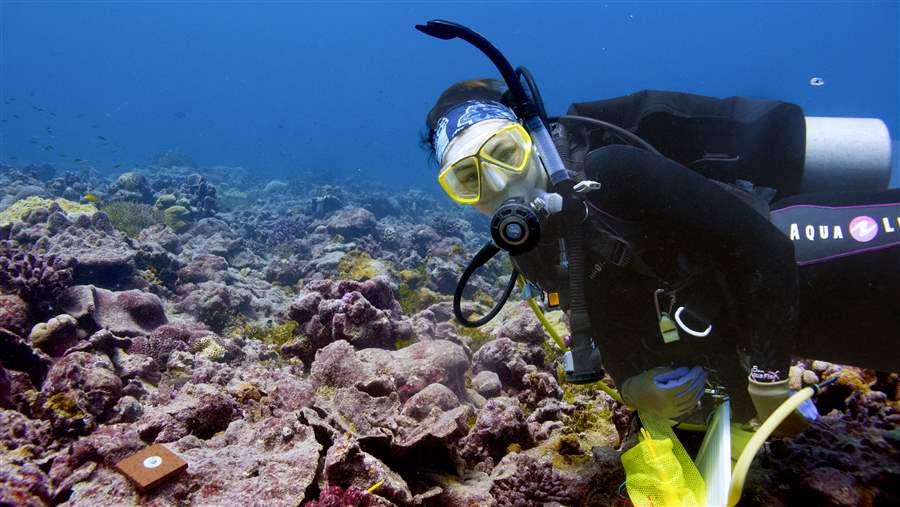 Julia Baum, Ph.D., is a marine ecologist and conservation biologist who makes scientific discoveries with the intention of driving conservation action. She has worked on shark overfishing, global fisheries assessments, and the impacts of climate change on coral reef ecosystems.

Coral reefs are among the planet’s most extraordinary and imperiled ecosystems. Faced with multiple threats—such as overfishing, pollution, destructive fishing methods, and warming waters—these complex systems require effective management to ensure that they can endure and thrive. Increasing evidence suggests that certain types of symbiotic algae that reside in coral tissues, known as zooxanthellae, exhibit different tolerances to heat stress and affect the corals’ ability to resist the impacts of warming waters.

In her Pew marine fellowship project, Baum will investigate which factors allow some corals to survive extreme heat stress and how reefs recover from mass coral mortality events. Her work will focus on the central equatorial Pacific atoll of Kiritimati, which experienced one of the largest heat stresses on record during the 2015–16 El Niño event. She will use genetic sampling to look for common traits in the zooxanthellae communities of coral colonies that survived the event to gain a better understanding of the mechanisms underlying coral reef resilience to warming ocean temperatures.

To learn more about Baum, read her bio.

Submit an update to this directory entry for Julia Baum, Ph.D.