Illegal fishing happens in every ocean in the world, accounting for up to $23.5 billion worth of seafood.

In two recent posts, I wrote about the two vital elements in this fight: how to best positively identify fishing vessels and how to track them as they move around the seas. In this piece, I’ll address the third component—how to best close the net around an illegal fishing suspect. 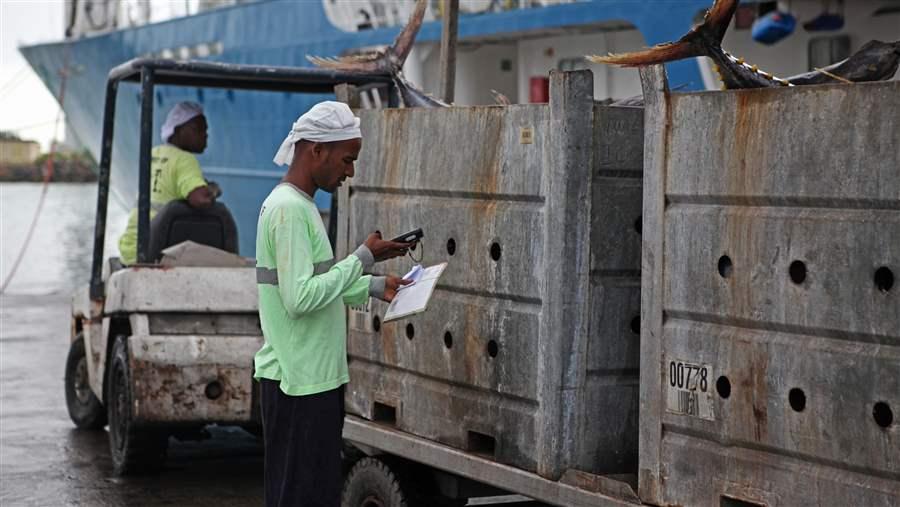 Traditionally, governments have relied on patrol vessels or aircraft to chase down potential poachers. While vital, that method of policing is also costly, often dangerous, and inefficient due to the expense and logistical challenges of policing huge areas of the ocean. In fact, some governments lack the resources to conduct even basic at-sea patrolling, pursuit, and apprehension.

The good news is they don’t have to. All wild-caught fish, whether landed legally or not, comes through a port on its way to market.  Instead of trying to chase down illegal fishers on the water, authorities can simply track them and await their arrival in port. That’s why strong, effective port state measures are the third core component of a comprehensive plan to end illegal fishing.

In 2009, the Food and Agriculture Organization of the United Nations adopted the Port State Measures Agreement (PSMA), a treaty that requires parties to strengthen and harmonize port controls for foreign-flagged fishing vessels. The goal: to keep fish caught through illegal, unreported, and unregulated (IUU) methods out of the world’s markets. The treaty will take effect and become legally binding among its members once 25 countries have ratified it. We’re more than halfway there, and we expect to see the PSMA enter into force in the coming years.

To ratify the treaty, a country must also adopt legislation detailing how it will implement the PSMA. In most cases, both the legislation and the implementation are straightforward, but some resource-poor countries still worry they can’t meet a global port enforcement requirement and thus have not yet ratified.

In response, Pew helped to develop a simple and robust methodology that can determine the specific capacity-building needs of each country. As the paper notes, “The main cost is related to establishing and maintaining an adequate, well-trained fisheries inspectorate with good levels of communication between national agencies, including customs and port authorities, and cooperation with regional and global bodies.

Yes, training port officials takes a fair amount of resources, but it costs far less than mobilizing and maintaining seaborne and airborne inspectors. And, as noted, a well-designed and implemented port enforcement strategy is the most effective way to stop illegal fishing.

Port enforcement can lead to prosecution

Earlier this year, New Zealand’s Navy spent weeks in pursuit of a vessel suspected of fishing illegally in the Southern Ocean. The country ultimately withdrew from the chase but not before gathering vital evidence on the suspects and alerting governments around the world to be on the lookout for the vessel.

It eventually surfaced at a port in Thailand, with millions of dollars’ worth of Patagonian toothfish (a highly valued fish commonly known as Chilean sea bass) in its hold. Thai port officials detained the ship, and an investigation revealed that it was part of a fleet controlled by a network of illegal fishing operators based in Spain. Spanish officials say they will prosecute those responsible.

The vessel has been allowed to leave Thailand’s waters, but the case shows that quick, thorough communication and port enforcement can stymie illegal fishers. It also highlights the need to strengthen regulations—in countries around the world—to better deal with non-national illegal fishers. International and national laws should be updated to allow evidence of fishing crimes collected by satellite technology and other countries to be used in court to prosecute offenders.

As it stands, the Port State Measures Agreement is a powerful tool, and governments should follow the lead of those that have ratified the pact. The treaty, once implemented, will give ports the legal framework to handle IUU fishers with a simple but effective response: inspect suspect vessels when they enter port and, if wrongdoings are revealed, impose sanctions.

Ports that lack the resources to carry out timely inspections can refuse entry to suspect vessels, costing that captain time, fuel, and ultimately money because he can’t fish while his hold is fuel and must move on in search of a port that will take him. Governments that have ratified the PSMA should reach out to encourage neighboring countries to also ratify, and to offer them help in doing so.

No country is immune to illegal fishing. For example, up to 32 percent of wild-caught seafood imported to the United States may have been illegally caught, according to a study published in 2014 in the journal Marine Policy. The U.S. ratified the PSMA earlier this month, and U.S. officials have pledged to help seafood-exporting countries join the treaty.  The European Union, which ratified in 2011, is promising to take similar action.

Illegal fishing involves a confounding amalgam of lone, rogue operators and tightly coordinated criminal networks that are constantly trying to evade detection. Still, the key to ending IUU fishing is grounded in common sense. Authorities must first be able to identify vessels, which can be done through permanent, seven-digit markers called IMO numbers and mandatory satellite tracking. In fact, law-abiding fleets can leverage this transparency to show their buyers precisely where, when, and how the fish were caught—information that has become increasingly valuable in the seafood supply chain.

Governments can then invest in additional satellite monitoring to track suspect vessels that continue to evade capture. Advanced monitoring systems can help locate and monitor boats with histories of rule breaking and alert port inspectors to the impending arrival of those ships. (Inspectors in countries that have implemented the Port State Measures Agreement will be particularly equipped to find and respond to evidence of illegal fishing.)

In short, the path to ending illegal fishing starts with mandating the IMO number system, tightening the systems through which vessels are tracked, and focusing enforcement resources at the ports where fish come in on their way to market.

It is critical that none of this crime-fighting work gets in the way of legitimate fishing operations. Ending illegal fishing is not about stifling the law-abiding players who make up the vast majority of the industry. In fact, it’s about protecting the good actors and helping authorities punish those caught breaking the rules.