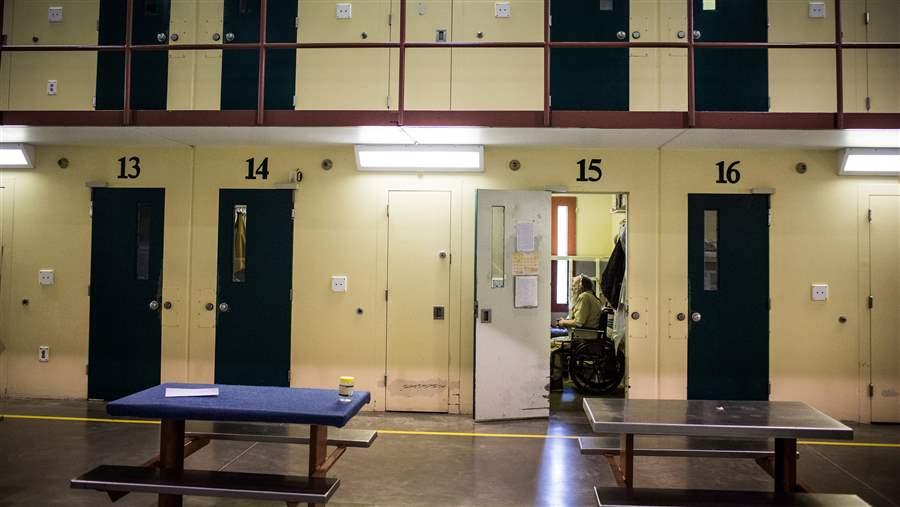 This report was updated on Dec. 8, 2017, to clarify state variation in the number of health professional employees for every 1,000 inmates in custody.

This report was updated on Oct. 30, 2017, to reflect revised data submitted by the Mississippi Department of Corrections pertaining to Medicaid enrollment.

On Oct. 27, 2017, the New Mexico Corrections Department (NMCD) reported to Pew researchers that its per-inmate health care spending figures in this report are inaccurate, reflecting incorrect information provided earlier by department officials. Pew has asked the state to supply in writing revised data and guidance; once these are submitted, Pew will amend or update the report as necessary. Questions related to these data should be directed to NMCD.

On a typical day, state prisons house more than a million people, many of whom have extensive and communicable health ailments. The manner in which services are provided affects state budgets because of the expensive treatments for some common conditions, the downstream costs of delayed or inadequate care, and the legal and financial consequences of being found to violate inmates’ constitutional rights to “reasonably adequate” care. Moreover, with nearly all incarcerated individuals eventually returning to society, treatment and discharge planning—especially for those with a substance use disorder, mental illness, or infectious disease—play an important role in statewide anti-recidivism and public health efforts. Taken together, these realities call for the attention of policymakers and administrators.

Yet these officials often lack the information they require to build and maintain high-performing prison health care systems that proactively make the most of diagnostic and treatment opportunities and avert the harmful and expensive consequences of inattention or missteps. They need to know how much money is being spent on what services and why; what benefits are achieved for those dollars; and whether these benefits are preserved post-prison through well-coordinated prison-to-community transitions.

This first-of-its-kind report, using data collected from two 50-state surveys administered by The Pew Charitable Trusts and the Vera Institute of Justice, along with interviews with more than 75 state officials, updates previous Pew research on spending trends in prison health care. The report also incorporates information on the operational characteristics of states’ prison health care systems; whether and how states monitor the quality of care provided— the critical counterpart to cost when assessing value; and common care continuity strategies for people leaving prison. The aim is to begin to paint a comprehensive picture for policymakers, administrators, and other stakeholders of how states fund and deliver prison health care, how they compare with one another, and some reasons for differences. These stakeholders can use such practical information and insights to help optimize policies and programs in the service of incarcerated individuals, state residents, and taxpayers.

The first of the two surveys,for which every state except New Hampshire provided data, queried senior budget staff of state departments of correction on expenditures, prison population demographics, the health care delivery system employed, and staffing. The second survey, for which every state except Alabama, Kansas, and New Hampshire provided data, collected information from senior health care staff of departments of correction on efforts to monitor the quality of care provided, disease prevalence tracking, and services to facilitate care continuity at release.

Notes: The 49-state median excludes New Hampshire, which did not provide data.

Nominal spending data for fiscal 2010–15 were converted to 2015 dollars using the Implicit Price Deflator for Gross Domestic Product included in the Bureau of Economic Analysis’ National Income and Product Accounts.

North Dakota did not report spending data for fiscal year 2010.