Health care and corrections have emerged as fiscal pressure points for states in recent years as rapid spending growth in each area has competed for scarce revenue. Not surprisingly, the intersection of these two spheres— health care for prison inmates—also has experienced a ramp-up, reaching nearly $8 billion in 2011.

Under the landmark 1976 Estelle v. Gamble decision, the U.S. Supreme Court affirmed that prisoners have a constitutional right to adequate medical attention and concluded that the Eighth Amendment is violated when corrections officials display “deliberate indifference” to an inmate’s medical needs.1 The manner in which states manage prison health care services that meet these legal requirements affects not only inmates’ health, but also the public’s health and safety and taxpayers’ total corrections bill. Effectively treating inmates’ physical and mental illnesses, including substance use disorders, improves their well-being and can reduce the likelihood that they will commit new crimes or violate probation once released.2

The State Health Care Spending Project previously examined cost data from 44 states* and found that prison health care spending increased dramatically from fiscal year 2001 to 2008. However, new data from a survey of budget and finance staff officials in each state’s department of corrections, administered by The Pew Charitable Trusts and the Vera Institute of Justice, show that some states may be reversing this trend.

This report examines the factors driving costs by analyzing new data on all 50 states’ prison health care spending from fiscal 2007 to 2011.† It also describes a variety of promising strategies that states are using to manage spending, including the use of telehealth technology, improved management of health services contractors, Medicaid financing, and medical or geriatric parole.

The project’s analysis of the survey data yielded the following findings:

As states work to manage prison health care expenditures, a downturn in spending was a positive development as long as it did not come at the expense of access to quality care. But states continue to face a variety of challenges that threaten to drive costs back up. Chief among these is a steadily aging prison population.

Data from the survey can provide state decision-makers with information to assess both their own state’s spending—over time and compared with other states—as well as cost-containment  initiatives underway from fiscal 2007 to 2011. Officials in all 50 states were willing to respond to the survey and supply spending information, which is a strong indication of their eagerness to make peer comparisons and address spending in a data-driven fashion. 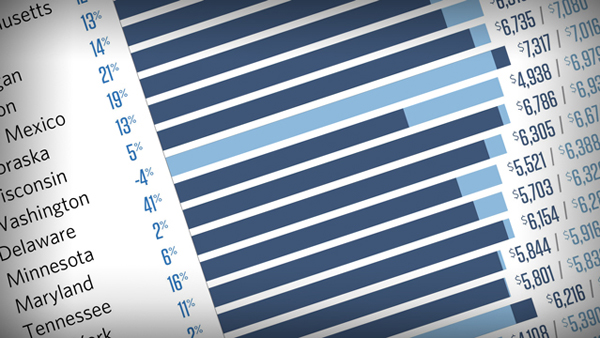 The growth of per-inmate spending on prison health care over five years before peaking in 37 states before 2011.