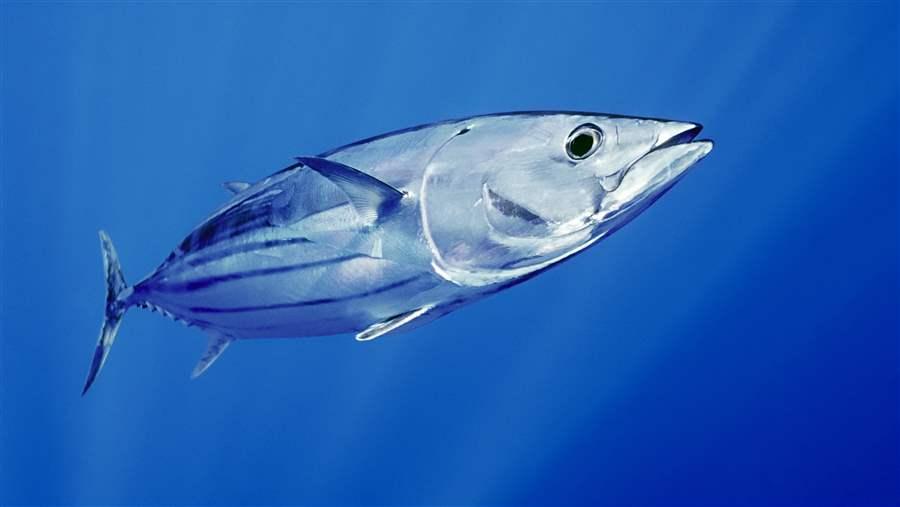 Drifting fish aggregating devices (FADs) are artificial rafts that fishing vessels drop in the ocean to attract and catch the fish that gather around them. But vessels also net species they don’t intend to catch, such as sharks, turtles, and juvenile bigeye tuna. Bigeye are overfished and in decline in the Atlantic and Pacific oceans.

Three years ago, Pew produced the first educated estimate of the number of FADs set adrift in the world’s oceans each year. Since then, the numbers have grown and the effects continue to mount.

According to the report Estimating the Use of FADS Around the World, an updated analysis released this week, “the total number of drifting FADs deployed in 2013 ranged from 81,000 to 121,000.” A large majority, at least 70 percent, was set in the Pacific, and the numbers are on the rise worldwide. 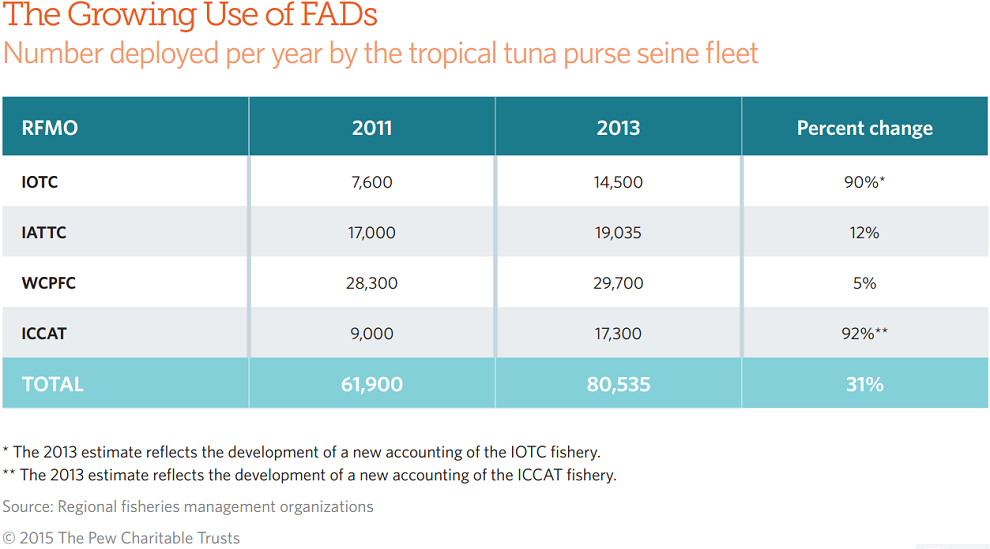 It’s important to note that while this is a comprehensive review, the results are still estimates of FAD deployments in the waters of the regional fisheries management organizations that regulate tuna. Data on FADs are proprietary, which means that industry maintains control over the details. Most companies don’t even share this information with fishery managers. So considering the difficulty in obtaining data, a range of 81,000 to 121,000 FADs deployed in 2013 is likely a conservative calculation. Still, the upper estimate rose 14 percent since Pew last ran the numbers, and that’s despite increased public awareness of the troubles posed by unmanaged FAD use.

Most retailers in Great Britain have altered their purchasing habits since 2011 and reject FAD-caught tuna for their own brands. In Australia, tuna brands have made similar commitments.

In recent years, Hugh Fearnley-Whittingstall, the British celebrity chef, has brought the debate over FAD use to a primetime television audience, while a group of Pacific island nations in the middle of the world’s largest tuna fishery garnered attention in 2014 when they began a project to track every FAD set afloat in their waters.

Failing to reign in unmanaged FAD proliferation can bring devastating ecological and economic impacts. For example, the population of bigeye tuna in western and central Pacific waters has dropped to just 16 percent of historic levels and continues to decline. A primary factor has been the significant number of juvenile bigeye caught in the nets of purse seine vessels using FADs. A recent scientific analysis for the International Commission for the Conservation of Atlantic Tunas found a similar situation in the Atlantic. Again, one of the main drivers has been the catch of juvenile fish around FADs.

In addition, the number of FADs abandoned at sea every year worsens problems with marine debris. Because FADs are built with plastic buoys and synthetic netting, unrecovered devices become plastic pollution in the ocean. In the past four years, the Island Conservation Society of Seychelles recorded 216 instances of FADs washing up on beaches and damaging coral reefs off the archipelago in the Indian Ocean.

A first-of-its-kind study in the Atlantic and Indian oceans estimated earlier this year that 10 percent of FADs deployed in those waters run aground. The rest break up and sink if they’re not retrieved by fishing crews. There are reports of similar problems in the Pacific.

Pew has not called for a ban on FADs, but governments, fishery managers, and industry must take steps to mitigate the problems they cause. Comprehensive monitoring and tracking systems must be established in every region in order to accurately quantify and monitor FAD use, improve tuna stock assessments, and ascertain how FADs contribute to marine debris. The data collected on drifting FADs should be used to develop science-based regulatory measures that help minimize bycatch, including the catch of vulnerable species, such as juvenile bigeye tuna. Authorities also should set up licensing and registration systems to hold vessels accountable for the FADs they deploy.

Although the exact number of FADs put in the ocean each year may be difficult to pin down, the implications of their global use are well-documented. If governments and the tuna industry truly want to foster a sustainable fishery, now is the time to increase transparency and begin managing FADs effectively.

Estimating the Use of FADs Around the World