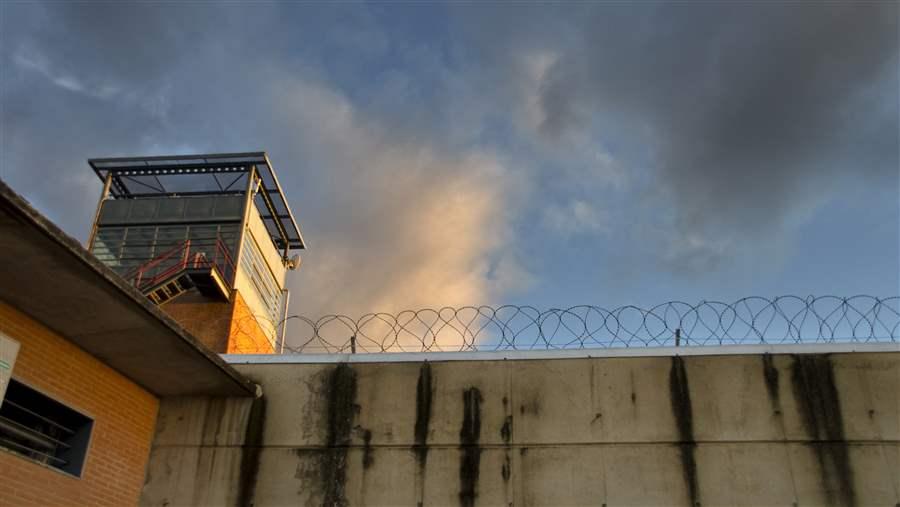 From the mid-1970s to the mid-2000s, the U.S. incarceration rate more than quadrupled as federal and state lawmakers mandated longer criminal sentences, placed restrictions on inmates’ release from prison, and made other policy changes intended to reduce crime.1 By 2007, 1 in 100 American adults was behind bars, and 1 in 31 was under some form of correctional control, including probation or parole.2 Meanwhile, combined local, state, and federal taxpayer spending on corrections had soared to more than $74 billion a year.3

Since 2007, more than 30 states have enacted policies to reverse corrections growth and contain costs, while maintaining the long-term, nationwide decline in the crime rate that began in the early 1990s.4 These policies prioritize costly prison space for violent and career offenders, adjust lengthy prison terms, expand prison alternatives for nonviolent offenders, and direct the resulting savings into programs that reduce recidivism.

Many of the reforms were advanced with technical assistance provided to states as part of the Justice Reinvestment Initiative, a partnership of The Pew Charitable Trusts, the U.S. Department of Justice Bureau of Justice Assistance, the Council of State Governments Justice Center, the Crime and Justice Institute, and other organizations.

Between 2007 and 2015, the incarceration rate receded to 1 in 115 adults, the correctional control rate dropped to 1 in 37, and the overall crime rate continued its downward trend.5

This chartbook examines the long-term increase in U.S. incarceration and highlights three key drivers of the recent decline: 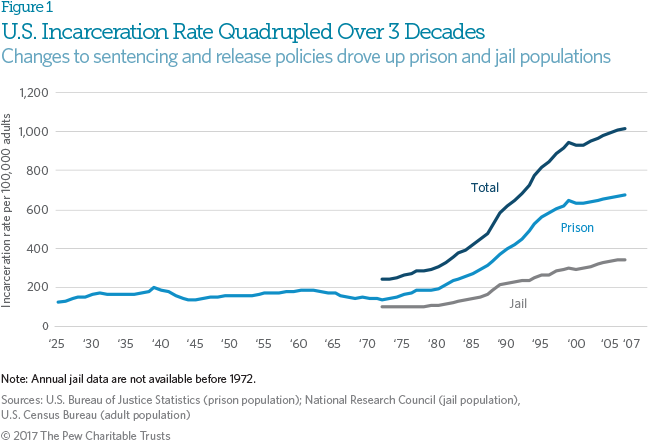 After remaining relatively stable for half a century, the U.S. incarceration rate grew more than fourfold between the mid-1970s and mid-2000s.6 In 1972, 1 in 417 adults was in a state or federal prison or a local jail, but by 2007 that rate had reached 1 in 100 adults, or roughly 2.3 million of 230 million adult Americans.7 Changes in crime rates contributed “virtually nothing” to the growth in incarceration during this period, according to the National Research Council.8 Instead, policy changes that increased prison admissions and extended the amount of time served were responsible for the dramatically higher incarceration levels.9 Between 1990 and 2009, state prison terms grew by an average of 36 percent, or nine months, to nearly three years.10 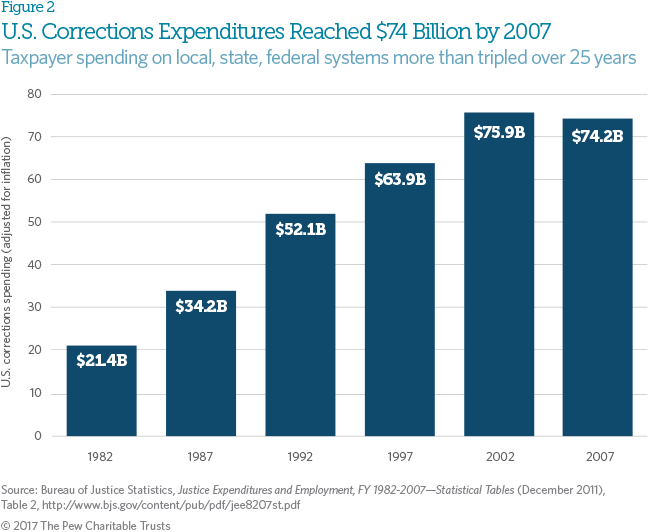 Rising taxpayer costs accompanied the explosive growth in the U.S. jail and prison populations. Adjusted for inflation, annual corrections expenditures—including federal, state, and local spending—rose from $21 billion in 1982, the earliest year for which comparable data are available, to more than $74 billion in 2007.11

For state governments, which manage most of the nation’s prisoners, general fund spending on corrections rose from $19 billion in 1987 to $49 billion in 2007, after adjusting for inflation.12 By 2007, 1 in 14 state dollars was going to corrections, up from 1 in 20 in 1987.13 Prisons accounted for nearly 90 percent of those costs, even though two-thirds of offenders were under community supervision.14 Throughout that 20-year period, corrections was the second-fastest growing category of state spending, trailing only Medicaid.15 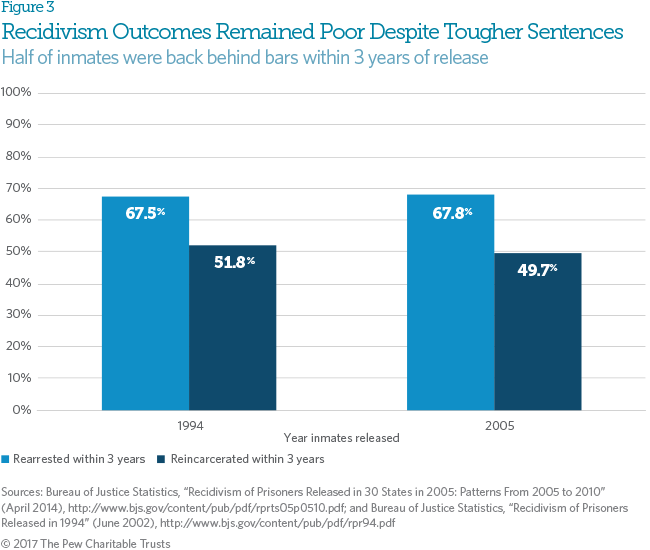 Large increases in incarceration and taxpayer spending had a small impact on crime but did not reduce recidivism. A comprehensive study by the U.S. Bureau of Justice Statistics (BJS) found that half of the inmates who left state prisons in 2005 were back behind bars within three years, either for a new crime or for violating the conditions of their release.16 That rate was virtually unchanged from the one reported for 1994, when BJS conducted its previous major study on the topic,17 and similar to the results of Pew research on prisoners released in 1999 and 2004.18

Although the specific policies vary from state to state, all are aimed at curbing the growth of prison populations and reducing costs to taxpayers while holding offenders accountable for their crimes. Most of the state reforms have garnered overwhelming bipartisan support, with state legislators casting more than 6,000 votes in support of the bills, compared with just over 500 votes against.20 In several states, including Georgia, Nebraska, Pennsylvania, and Vermont, reforms passed unanimously.21 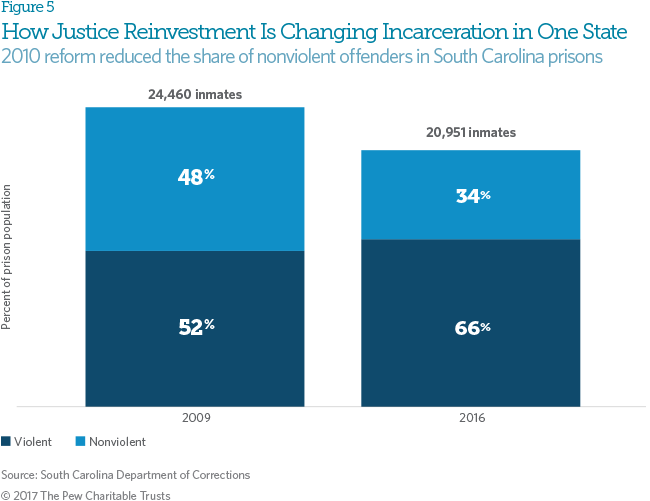 South Carolina lawmakers passed far-reaching sentencing and corrections legislation in 2010 as part of the Justice Reinvestment Initiative to reduce penalties for lower-level drug offenders and prioritize prison space for chronic and violent offenders.22 The state’s prison population was projected to surpass 28,000, but has instead fallen below 21,000, a difference of more than 25 percent. The state’s Department of Corrections has closed six prisons and estimates that the reforms have saved taxpayers $491 million.23 South Carolina’s violent and property crime rates fell 25 and 15 percent, respectively, between 2009 and 2015.24 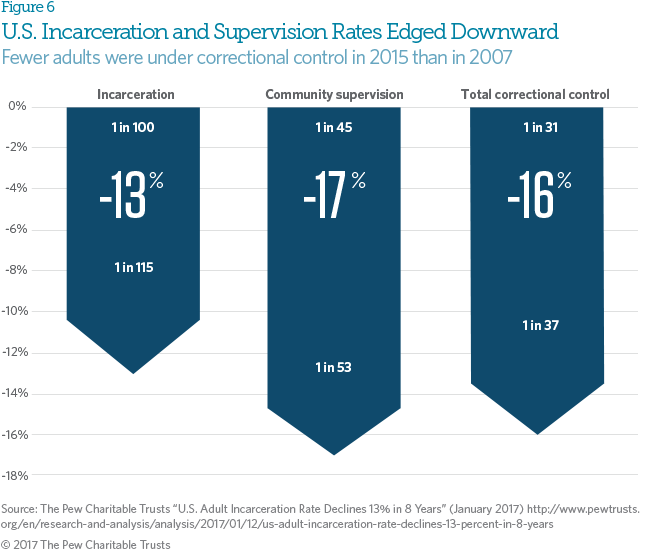 Despite this progress, the incarceration rate is still four times higher than what it was in the 1970s. 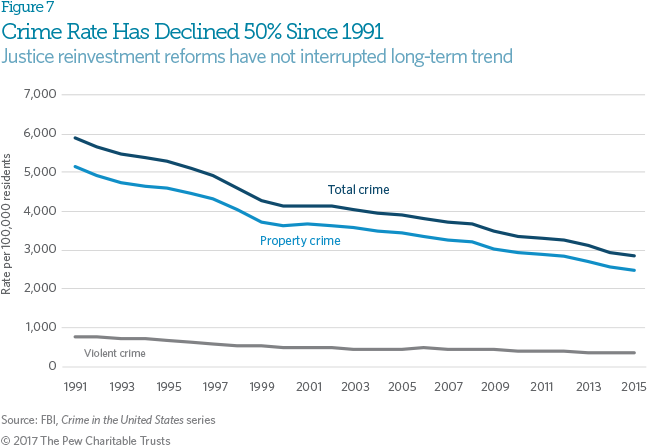 After peaking in 1991, U.S. violent and property crime rates have plummeted to their lowest levels since the late 1960s.27 This decline continued even as states reversed or slowed prison growth through justice reinvestment and other reforms. The violent crime rate was 21 percent lower in 2015 than in 2007, and the property crime rate fell 24 percent during that same span. Nationwide, police reports indicated a 3 percent rise in the violent crime rate in 2015, but the Justice Department’s national survey of victimization found no change in violent crime from 2014 to 2015.28

Experts generally credit increased incarceration with a portion—as much as 25 percent—of the nationwide decrease in crime that began in the early 1990s.29 But many researchers say that the nation’s prison buildup has passed a point of diminishing returns and may even be producing negative results, while other factors, such as changing demographics and reduced use of cash, are responsible for the bulk of the decline.30 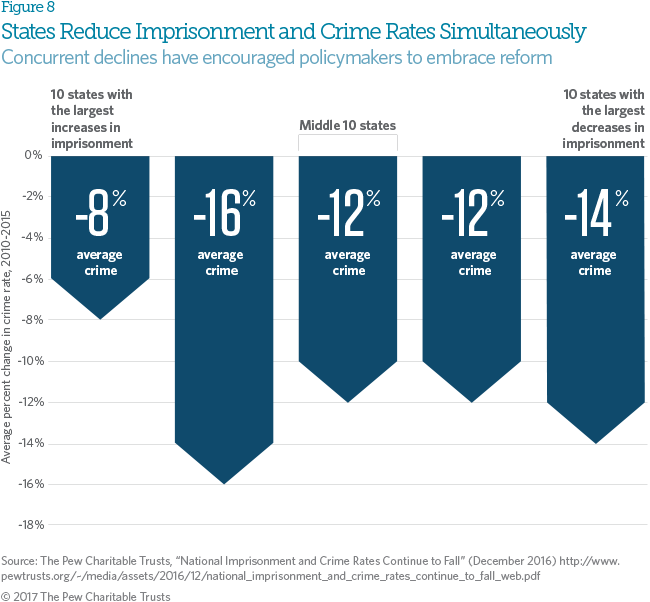 The relationship between incarceration and crime is complex, but most states that have cut imprisonment have also experienced simultaneous declines in the crime rate. Both rates fell in 31 states between 2010 and 2015.31 The 10 states with the biggest decreases in their use of prisons saw crime drop more, on average, than the 10 states with the largest increases in imprisonment.32 These states’ success in reducing crime and incarceration has encouraged leaders in other states to pursue criminal justice reforms. 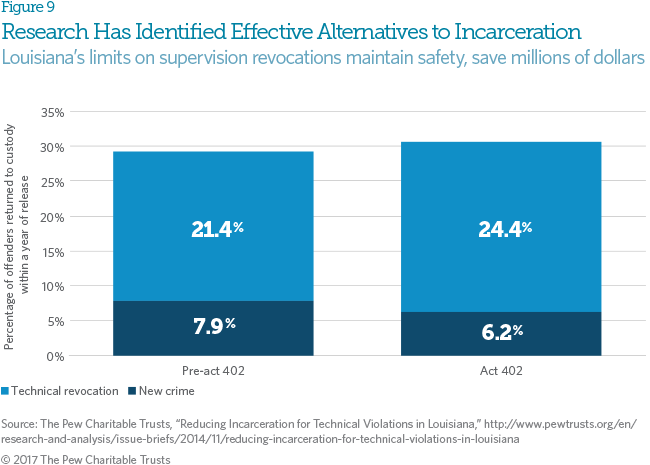 Research that identifies effective prison alternatives and correctional practices and policies has expanded greatly in recent years, and growing policymaker awareness of this body of evidence has been a driving force behind the wave of criminal justice reforms. Key advances include the development of risk and needs assessment tools that can identify the factors driving individuals’ criminal behavior and inform decisions about which programs and services can help offenders avoid future encounters with the justice system.

For example, a 2007 Louisiana law (Act 402) set a 90-day incarceration limit on first-time revocations for violation of supervision rules. An evaluation found that after five years, the law had reduced the average length of such confinement by 9.2 months. It also had contributed to a 22 percent decline in returns to custody for new crimes, which fell from 7.9 to 6.2 percent, and saved taxpayers an average of $17.6 million in annual corrections costs.33 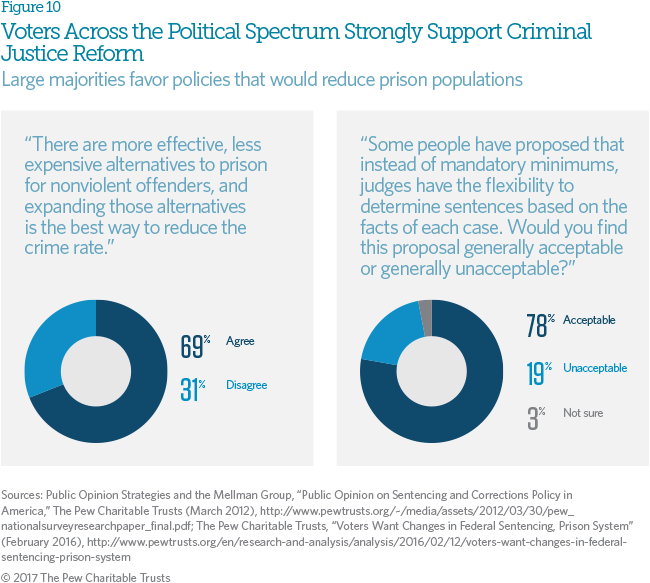 Public opinion has played a key role in the state-level reforms that have lowered the nation’s incarceration rate. According to national and state research conducted for Pew by independent, bipartisan polling firms, voters support a wide range of state and federal policy changes that steer nonviolent offenders into effective alternative programs.34 Voters want a strong criminal justice system, but they say the size and cost of the nation’s prison population can be reduced while protecting public safety. Their support holds across party affiliations and geographic regions and even among households in which a member has been a victim of crime or is a law enforcement officer.