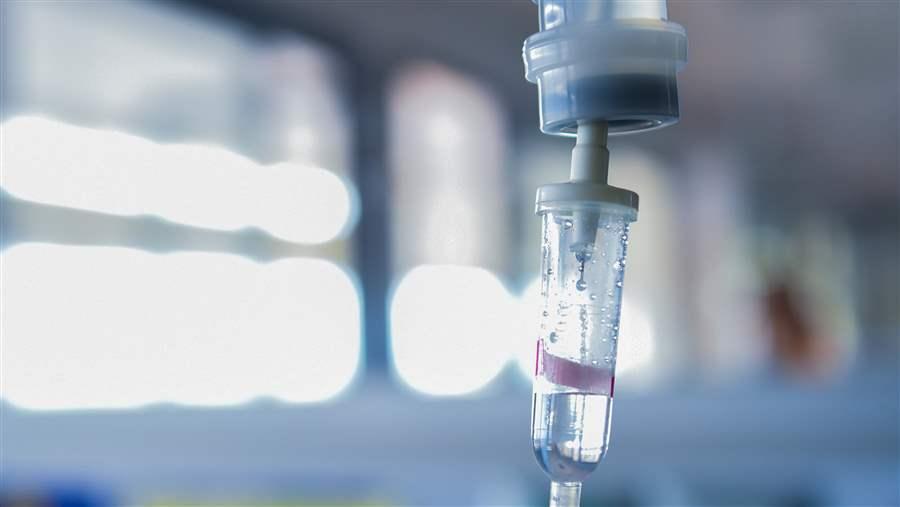 The use of biosimilars—biological products that are highly similar to a biologic drug already approved by the Food and Drug Administration (FDA)—has the potential to reduce drug spending in Medicare Part B,1 which totaled $21.5 billion in 2014.2 However, savings to Medicare will depend on the extent to which biosimilars have lower prices than biologics—which, unlike conventional drugs, are proteins or other materials derived from living cells— and the rate at which providers adopt them. Alternative payment policies, including the use of either a consolidated payment rate or an approach known as the least costly alternative (LCA), could further reduce Part B pharmaceutical costs. Using these policies depends on whether biosimilars can be safely and effectively substituted for biologics.

Medicare payment to providers for Part B drugs is based on a drug’s average sales price (ASP) for all purchasers.3 Payment for most Part B drugs is set at ASP plus an add-on of 4.3 percent.4 By statute, however, providers who administer biosimilars are reimbursed at the ASP plus 4.3 percent of the ASP of the reference biologic—the drug on which the biosimilar is based.5 By paying the same add-on rate for biologics and their biosimilars, the Centers for Medicare & Medicaid Services (CMS) creates equal financial incentives for providers who are choosing between a reference biologic and a biosimilar.

The Medicare Part B program, in contrast to its payment policy for biologics, reimburses providers the same amount for brand and generic versions of conventional drugs. This consolidated rate is based on the volume- weighted ASP of all brand and generic versions of a medicine.6 If a similar approach were adopted for reference biologics and biosimilars, Part B drug spending could be reduced if providers responded by increasing their use of biosimilars over reference biologics (or increasing the use of the reference product if it were available at lower cost). However, the adoption of a consolidated payment rate would have no effect on costs if providers did not increase uptake of the lower-cost product. Notably, Medicare savings from a consolidated payment rate would be greatest compared to the current payment policy when biosimilar use, or uptake, was low, and would be smallest when biosimilar use was high.

A consolidated payment approach, which would effectively decrease Medicare payment for higher-cost reference biologics and increase payment for lower-cost biosimilars, would create a financial incentive for providers to switch to the latter. According to the office of the inspector general, Medicare’s use of a consolidated payment rate has reduced the price it pays for branded conventional drugs by nearly 60 percent in two years.7

Research shows that an LCA approach—in which the payment rate for a higher-cost therapy is set at the payment level of a lower-cost, therapeutically comparable alternative—could also reduce Medicare Part B costs on reference biologics and their biosimilars.8

This policy has the potential to reduce drug spending by a greater amount than the consolidated payment approach, which takes into account the ASP of a more expensive reference biologic. And LCA does not, unlike the consolidated payment approach, rely on increased uptake of biosimilars to generate cost savings. Assuming no change in overall utilization, total Medicare spending on therapeutically comparable drugs in an LCA grouping, including reference biologics and their biosimilars, would be the same regardless of biosimilar uptake.

Nevertheless, the consolidated approach and LCA may not always be appropriate if a biologic and its biosimilars cannot be substituted, such as when there are safety concerns with switching patients to a biosimilar. It is also possible that the interchangeability of a reference biologic and biosimilar will differ depending on the indication for which the drug is prescribed.

Reductions in Medicare Part B payment may also increase the number of providers who are “underwater” when they administer a reference biologic, because the payment they receive from Medicare is less than their cost of acquiring the drug from a wholesaler or directly from the drug company. This could lead to providers choosing to stop treating their patients with biologics for which there are no lower-cost, interchangeable biosimilars, thus limiting patient access to drug therapies.

Furthermore, developers of reference biologics are likely to explore ways to maintain their market share as new biosimilars are developed. One approach might be to alter or improve a biologic—such as by making changes to reduce the number of doses—in order to extend patent protections or exclusivity that could prevent biosimilar competition. For example, although the main patents for Enbrel (etanercept), a drug used to treat rheumatoid arthritis, have expired, new patents granted in 2011 will potentially delay biosimilar competition through 2029.12

The manufacturers of reference biologics could also respond to competition from biosimilars, as well as to new payment policies, by lowering the price of their products—as the manufacturer of Aranesp, a drug to treat chronic kidney disease and cancer, has done in markets outside the United States.13

The following data examining the potential one-year effect of the current policy, as well as the potential one- year impacts of the consolidated payment and LCA policies on Part B drug costs, focus on five biologics covered under Medicare Part B: Avastin (bevacizumab), Herceptin (trastuzumab), Neulasta (pegfilgrastim), Remicade (infliximab), and Rituxan (rituximab).14 These reference biologics were selected based on their costs to Medicare Part B,15 an assessment of the number of biosimilars currently in development for each,16 and anticipated patent expirations (Table 1).

In 2014, annual Part B spending on these five biologics totaled $5.47 billion, which is based on the payment rate of ASP plus 4.3 percent. The Pew Charitable Trusts estimates that the ASP of each drug, when combined, accounts for approximately $5.25 billion of this total amount, while $226 million can be attributed to the 4.3 percent add-on payment. 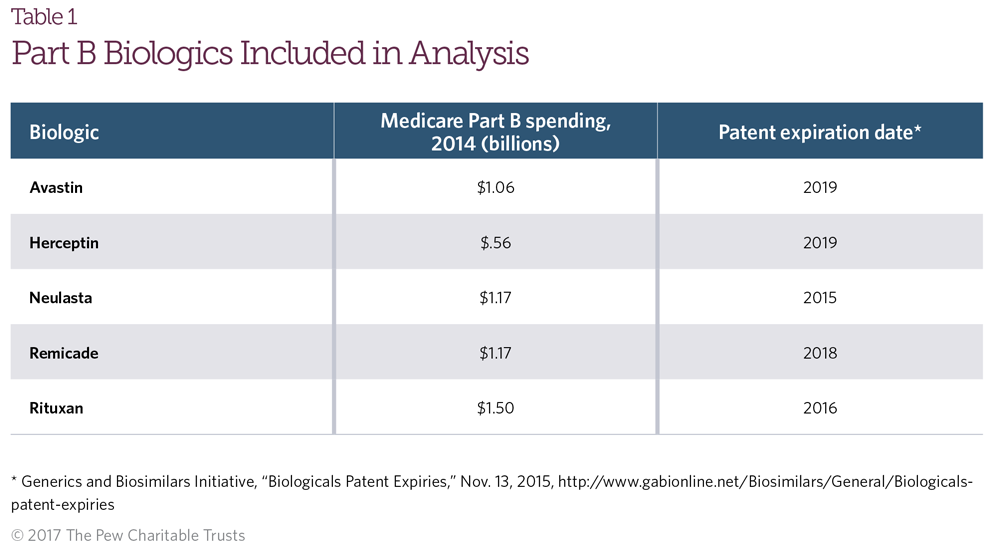 In constructing a model to estimate drug spending, the following assumptions were made about pricing, utilization, and the Part B biologic market: 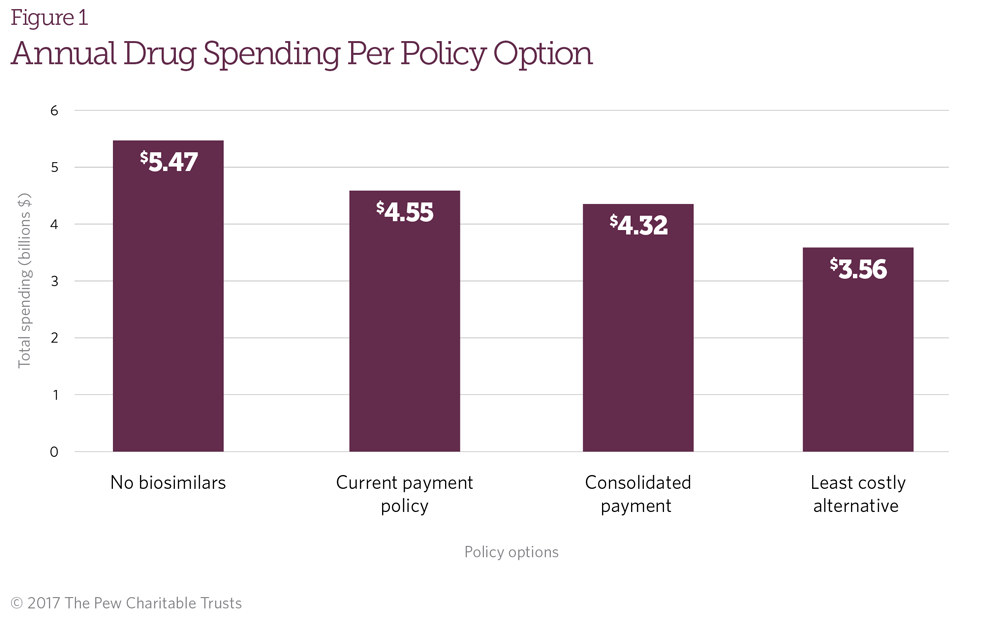 These estimates are sensitive to assumptions on biosimilar pricing, biosimilar uptake, and provider responsiveness to payment rate changes under a consolidated payment approach. Sensitivity analyses were conducted to evaluate the impact of each of these assumptions while keeping all other assumptions constant. 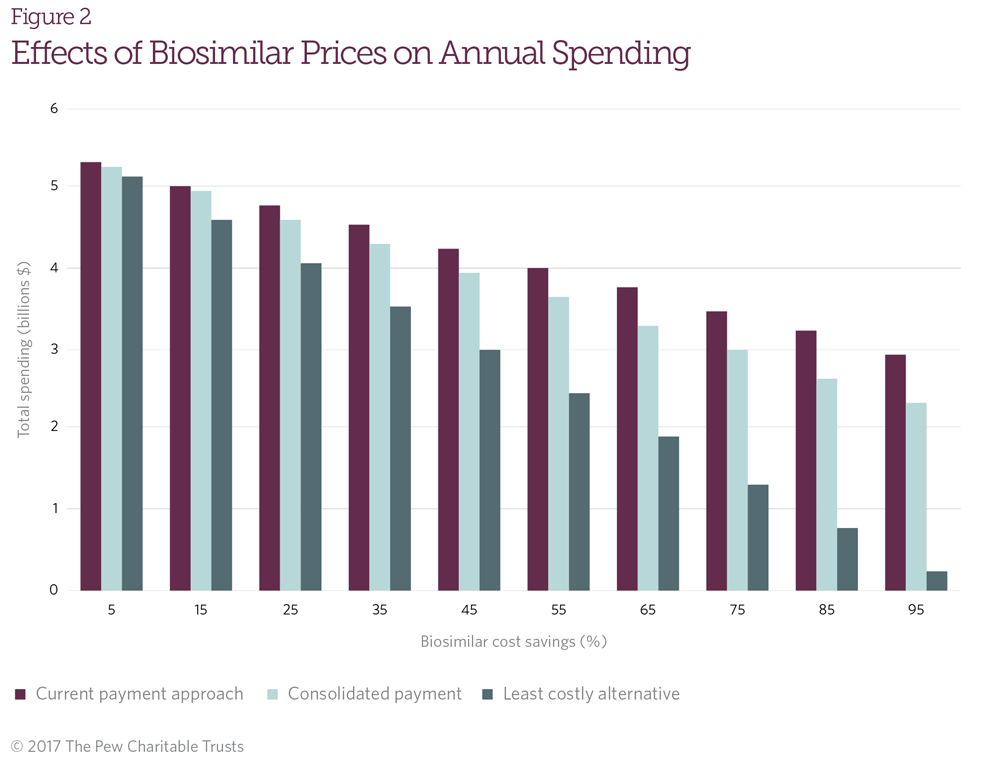 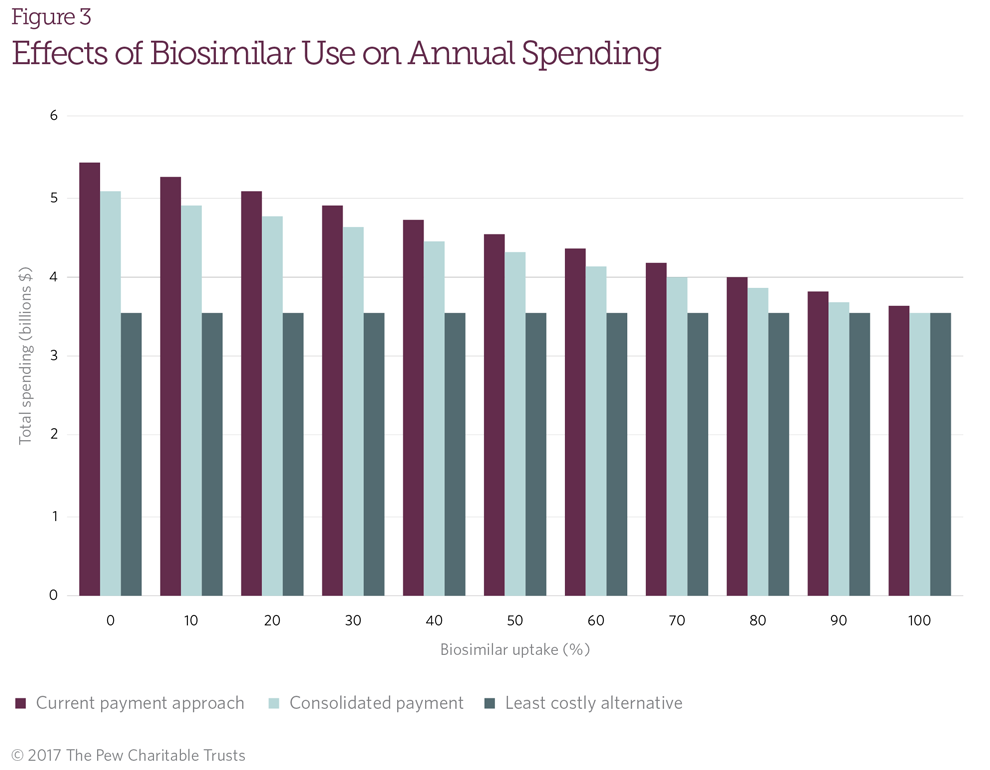 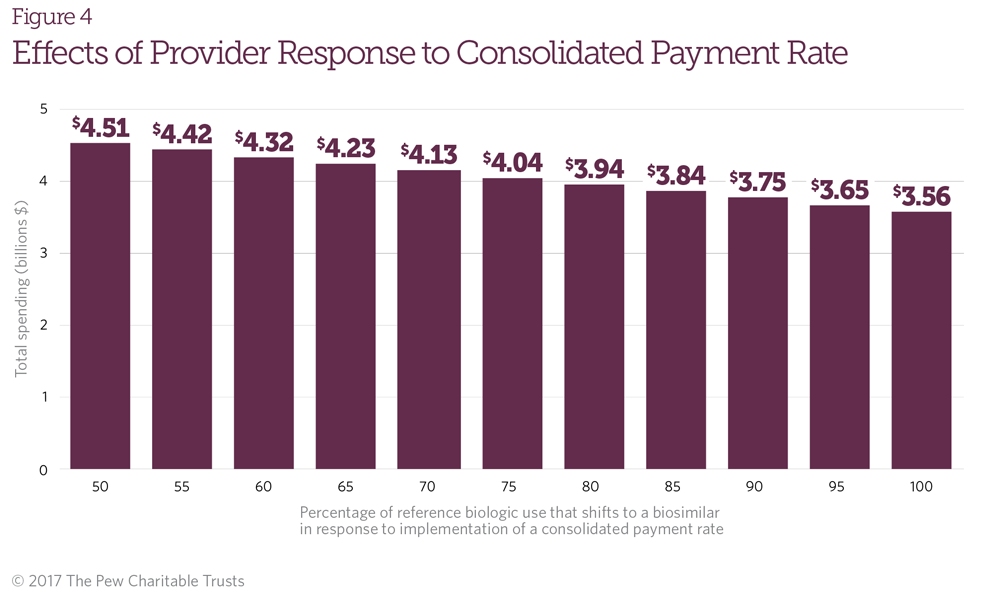 The policy alternatives discussed in this brief would reduce Medicare payment for biologics when there are lower-cost biosimilars available. However, some stakeholders have expressed concern that reducing Medicare payment could inappropriately limit patient access and lead to worse health outcomes.20 For this reason, it is important that the decision to implement either LCA or consolidated payment be informed by clinical evidence.

For example, patients already being treated with a reference biologic should not be switched to a biosimilar unless there is evidence demonstrating the interchangeability of the two products. If the products are not interchangeable, paying providers based on the consolidated payment approach or LCA could inappropriately limit patient access to necessary care.

However, there are other circumstances, such as newly diagnosed patients, in which treatment with a biosimilar is appropriate. In these cases, policymakers should consider using new approaches to manage health care costs. Tools such as consolidated payment and LCA have the potential to increase competition and lower Medicare drug spending on biologics and biosimilars that produce similar clinical outcomes.

Under Medicare’s current payment policy, providers generally have equal financial incentives to administer either reference biologics or biosimilars to patients. Alternative policies, such as those described here, have the potential to generate greater savings to Medicare. However, policymakers should consider clinical evidence, including research on interchangeability of biologics and biosimilars, before developing and implementing new policies.

Policies to Accelerate Approvals of Generic and Biosimilar Drugs

The availability of generic drugs&mdash;which can be priced 80 percent lower than their branded equivalents&mdash;increases competition and reduces spending on pharmaceuticals. The Generic Pharmaceutical Association estimates that generic drugs generated $254 billion in savings in 2014.