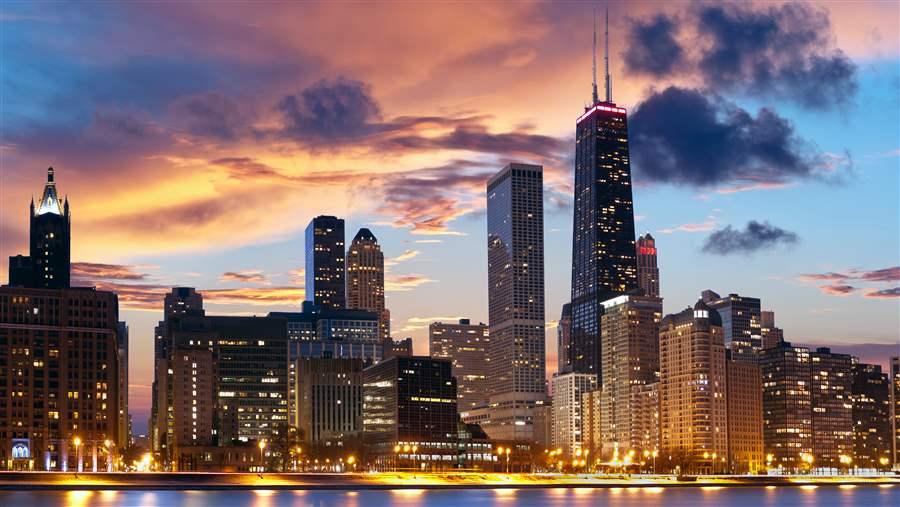 Although the U.S. economy made great strides in 2014, showing the strongest growth since the Great Recession, several major cities are recovering unevenly.

Although the U.S. economy made great strides in 2014, showing the strongest growth since the Great Recession, cities are recovering unevenly.

An analysis of the fiscal health of America’s 30 major cities by The Pew Charitable Trusts found that most saw their revenue and spending rise that year.  In 2014, some began to surpass peaks set before the Great Recession, which ran from late 2007 through mid-2009. But many cities have not made up lost revenue.  Indeed, revenue has continued to drop in some, and they have responded by cutting spending.

This chartbook updates a fiscal analysis of these cities released in April 2016. The exception is Cincinnati, which changed its fiscal year in 2013, making direct comparisons impossible. Pew examined audited city financial records and the issuance of new money bonds. 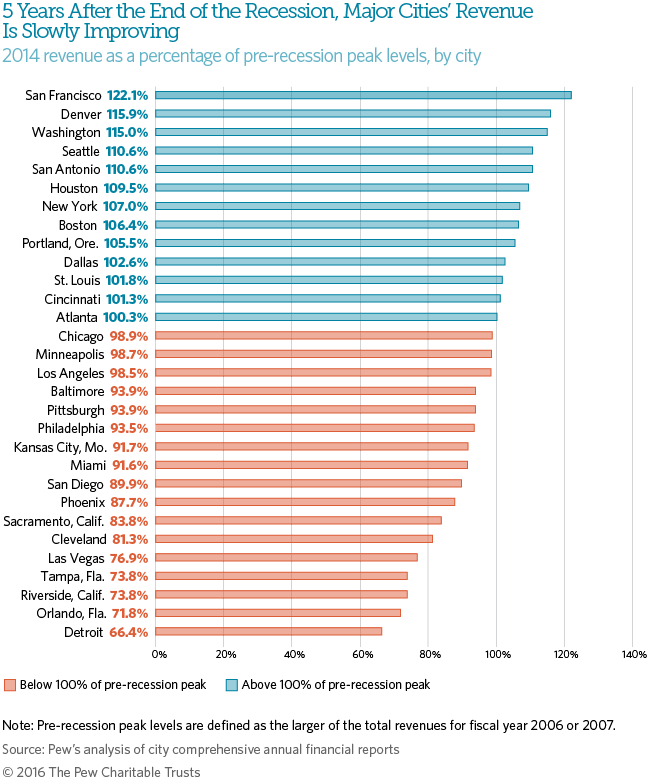 All of the cities that saw their collected revenue outpace pre-recession peaks recorded positive growth from 2013 to 2014. Only Atlanta saw its property taxes dip in 2013 (-0.4 percent). 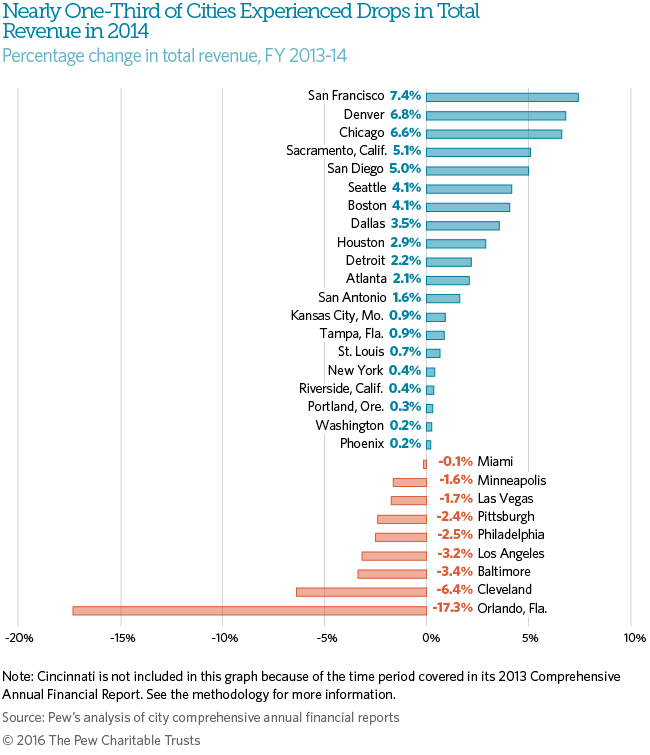 Seven of these—not Baltimore and Miami—had the biggest drop in revenue since Pew began tracking these cities’ fiscal conditions in fiscal 2007. Orlando (-17.3 percent) and Cleveland (-6.4 percent) were harder hit than the other cities.

Among the seven cities hitting their revenue trough in fiscal 2014, five cities—Cleveland, Los Angeles, Minneapolis, Philadelphia, and Pittsburgh—experienced simultaneous drops in property taxes and intergovernmental funds. These are the two primary sources of revenue for most local governments.  Las Vegas saw property tax collections decline to their lowest levels since fiscal 2007, while Orlando was particularly hard hit by a sharp drop in intergovernmental revenue and weak property tax growth.

For the first time since 2009, the cities’ property tax collections grew, on average, compared with the previous year (0.4 percent).

Aid to cities from the federal and state governments is a significant part of the financial picture for local governments. For most cities, it is the second-largest source of revenue. During the recession, intergovernmental aid, a source that city policymakers do not control, was a main determinant of revenue declines and rebounds in nearly half the cities studied.

In fiscal 2014, this key source of revenue continued to pose a challenge for cities. Twenty-one of the 29 cities studied recorded drops in intergovernmental revenue. The average year-over-year decline in aid from other governments was the steepest since fiscal 2008, dropping -6.9 percent from the previous year. 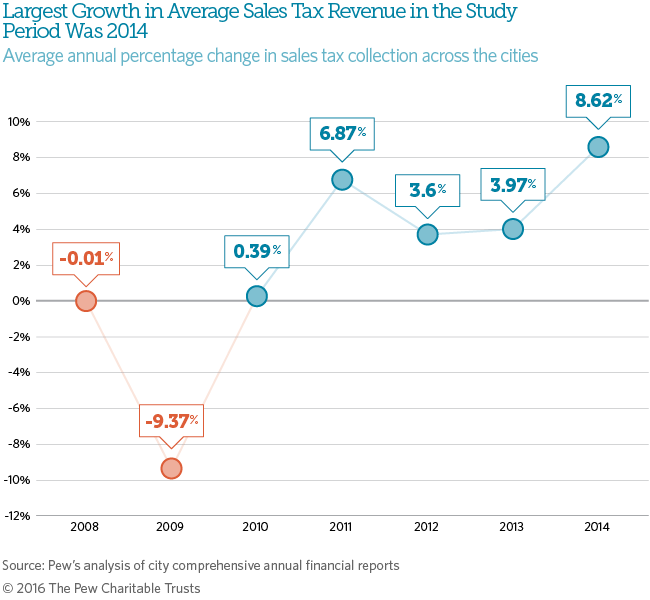 Improving economic conditions helped to boost sales tax collections in nearly every city studied that has this revenue source.

Twenty out of 30 cities in our study collect some kind of sales tax.*

Across all of the cities, sales tax collections grew an average of 8.6 percent compared with 2013 levels—extending this trend to five straight years. Only Atlanta bucked this trend (-1.8 percent).

The 8.6 percent average year-over-year growth among the 20 cities is the largest positive change between fiscal 2007 and 2014. 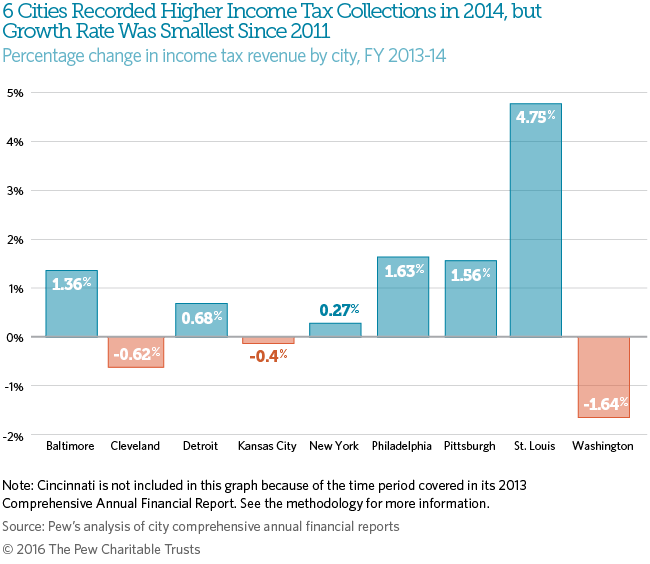 Income taxes are a key revenue source for some cities, but growth has slowed the most since 2011. Income taxes across U.S. cities are less common than other forms of local revenue—such as property taxes and intergovernmental revenue. Among the 30 cities we studied, income taxes are levied in only 10 (Baltimore, Cincinnati, Cleveland, Detroit, Kansas City, New York, Philadelphia, Pittsburgh, St. Louis, and Washington).

In these 10 cities, income taxes typically make up a large portion of municipal revenue—27 percent on average. Like sales taxes, income tax collections fell off quickly during the Great Recession but have bounced back with improving economic conditions.

Six of the cities that collect an income tax recorded higher collections between fiscal 2013 and 2014, growing at the slowest average rate (0.9 percent) since 2010, when it was -4.8 percent.

In fiscal 2014, spending in half of the 30 cities had not reached pre-recession levels—remaining on average -1.1 percent below 2007 levels. Strained local government budgets have continued to drive spending cuts to critical public services, such as investments in housing and community development, social services, public safety, and education.

Chicago and Detroit both registered higher spending in 2014 after two consecutive years of major cuts. Chicago increased its spending on debt compared with the previous year by 51 percent, driven by a $1.5 billion bond issuance. Detroit hiked its general government spending by 53 percent from the previous year, coinciding with its exit from bankruptcy in December. 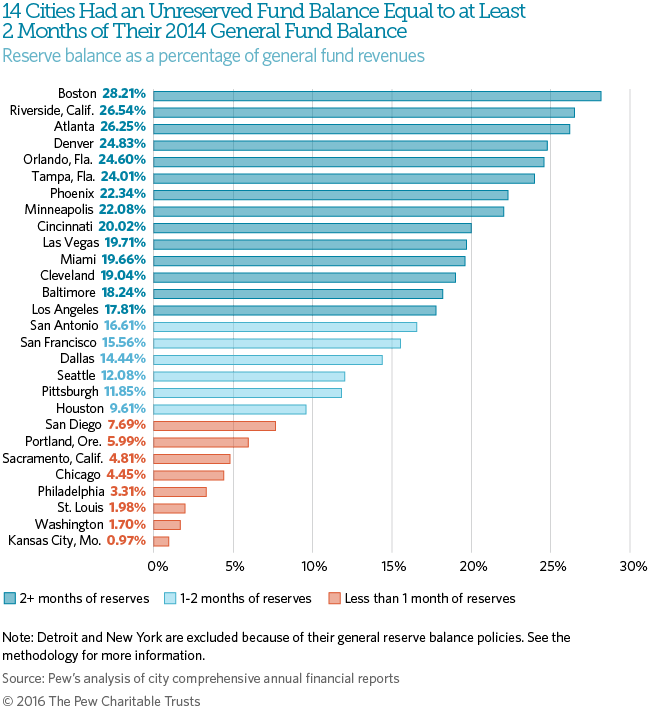 Reserves are an important fiscal tool, allowing policymakers to maintain key services when revenue drops. After drawing down their reserves during the Great Recession to address historic budget shortfalls, cities have been steadily building them back up as the economy—and collections—improve. Many, however, are struggling to return to pre-recession levels.

Fourteen cities had an unreserved general fund balance equivalent to at least two months of their 2014 general fund revenue—the minimum recommended by the Government Finance Officers Association as a benchmark.

Of these 14 cities, the average balance was 22.4 percent of general fund revenue—8.7 percentage points better than the 30-city average (13.7 percent).

Balance-to-revenue ratios in 16 of the 29 cities studied remain below their pre-recession peak. Fifteen cities were at this mark in fiscal 2013. 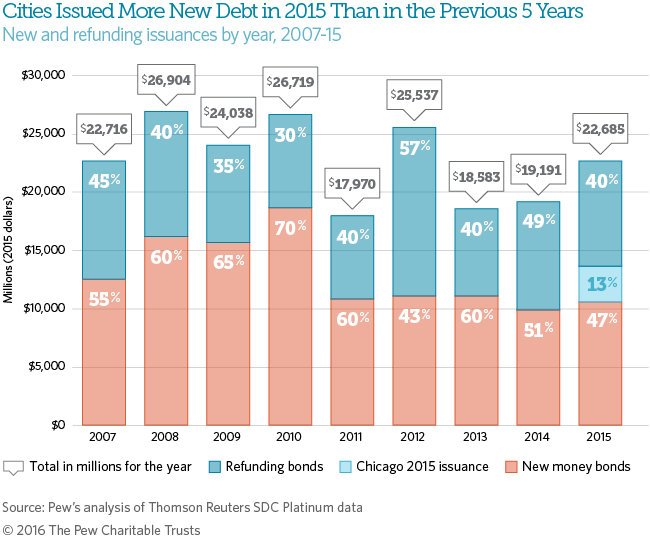 The 30 cities issued a combined $13.6 billion in new debt in 2015—a 38 percent increase from the previous year. This represents the largest volume of new issuances since 2010, when the federal government accelerated borrowing among state and local governments through the Build America Bonds program.

Refunding bonds, which had driven the majority of issuances in the years after the Great Recession, represented a smaller share of total activity in 2015 than in the previous year.

However, Chicago alone had an outsize impact on the 30-city picture: It issued more than a fifth of all new money bonds ($3.0 billion) as part of its attempt to address fiscal challenges. These included a required hike in pension contributions, budget shortfalls, and deferred investment in infrastructure and schools.

The analysis, based on audited city financial statements, continues work undertaken by Pew following the Great Recession, which ran from late 2007 through mid-2009. For this multiyear series, Pew has examined data in the financial statements of the central city in each of the nation’s 30 largest metro areas as defined by the 2010 census. Though included in analyses before 2013, Cincinnati was excluded from the 2013 estimates of revenue, spending, and reserves because city officials changed its fiscal year in 2013. That resulted in financial documents that covered only six months and made it impossible to compare financial information to previous years or to other cities included in the analysis. Cincinnati was added back to the 2014 sample, but 2013-14 comparisons are impossible.1

For the final chart on municipal bonds, Pew examined 1991-2015 calendar year data from the Thomson Reuters SDC Platinum database on municipal bonds issued by the central city in the nation’s 30 largest metro areas according to the 2010 decennial census.

Controlling for the effects of inflation enables comparisons of how fiscal conditions have changed for cities over the period studied and in relation to each other. Dollars are adjusted for inflation using the U.S. Bureau of Economic Analysis’ National Income and Product Account estimate. The same gross domestic product deflator values were used for all 30 cities in the 2014 analysis, regardless of geographic location, though each was adjusted to accommodate the appropriate fiscal year calendar in a given city. This approach avoids overstating differences between cities based solely on imperfect inflation estimates. The same adjustments were done with the 2015 data from the Thomson Reuters SDC Platinum database.4

There are several differences inherent to the governments of the 30 cities that data adjustments cannot standardize, such as the services they provide, the ways they generate revenue, their governmental structures, and their relationships with surrounding local and state governments. Although we have standardized the data across cities to the greatest extent possible and have consulted with the cities and adjusted data where appropriate, readers should keep these differences in mind.

In a few cases, variations from the standard methodology were required because of data constraints. Philadelphia, St. Louis, and Seattle, for example, did not break out revenue categories consistent with the detail provided by the other cities. After consulting with these cities, researchers relied on data from the supplemental statistical section of the CAFR (for Seattle and St. Louis) and detailed, supplemental financial reports (for Philadelphia). The modifications result in minor differences between the values of the line items used in this research and the values reported in the CAFR’s statement of revenue and expenditures.5

In Florida, the remittance of the city share of state-imposed taxes, specifically sales tax, utility tax, and communication service tax, is reported differently in city CAFRs, especially as it affects Miami and Tampa, Florida. In some instances, these taxes are reported as own-source revenue, though they are locally generated state revenue that the city receives from the state. Pew re-categorized and included this revenue as intergovernmental to ensure accurate cross-city comparisons.

Pew researchers identified a “peak” and “trough” revenue year for each city, using inflation-adjusted dollars. Peak years could occur at any point in the study period, while trough years were defined as the lowest revenue point between 2008 and 2014; this time frame specifically targets drops in revenue during by the Great Recession.6 Next, Pew grouped cities based on 2014 revenue performance relative to each city’s prior peak to identify those experiencing a rebound—exceeding their previous revenue high points—and those still struggling to return to pre-downturn levels.

For each city, Pew examined the primary drivers of revenue loss between peak and trough years, calculated the total revenue decline, and analyzed the share of that total loss represented by each individual revenue source. Similarly, for rebounding cities, Pew identified the revenue streams that were most responsible for financial gains between a city’s trough year and the end of the study period, as well as between 2012 and 2013. This strategy allowed researchers to assess trends across cities in the types of losses that drove revenue declines and the gains that spurred rebounds.

Pew researchers normalized revenue data reported in city CAFRs to create comparable categories that allow for meaningful comparisons across cities. While some types of revenue are reported relatively consistently across cities, in other cases Pew combined CAFR line items to create similar revenue groupings. The categories include:

Pew researchers also examined how cities responded to revenue decline and growth by looking at changes in operating spending, reserves, and the management of long-term obligations.9 Applying the same approach as with city revenue, researchers grouped CAFR line items where appropriate to create comparable spending categories across the cities. The categories include: