Note: This research has been updated. For the latest data, see Recovering from Volatile Times.

This report examines how America’s big cities navigated the worst U.S. economic downturn since the Great Depression. It focuses on post-recession revenue as compared with earlier peaks, explores future prospects, and considers cities’ remaining fiscal challenges and their ability to manage future uncertainty while continuing to provide key services to taxpayers. 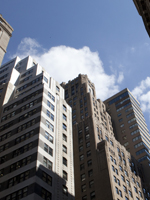 The Great Recession created significant fiscal hurdles for the 30 cities at the center of the nation's most populous metropolitan areas. Most of these cities bore the brunt of the downturn later than the federal and state governments and have been slow to recover.

Cities dealt with fiscal strain in a variety of ways: dipping into reserve funds, cutting spending, gaining help from the federal or state government, and increasing revenue from tax and nontax sources. Though these strategies offered short-term solutions, by 2011 many cities still faced challenges, the consequence of declining revenue, reduced spending, shrunken reserves, and rising pension and retiree health care costs.

Property tax collections can be slow to respond to economic swings. They delayed the early effects of the Great Recession for most of these cities but began to drop in 2010. The fiscal effects of this decline were compounded by increasingly unpredictable aid from state and federal governments that were dealing with their own budgetary constraints.

Researchers from Pew standardized data from the Comprehensive Annual Financial Reports for all 30 cities from 2007 through 2011, the latest year for which complete data were available, and adjusted for inflation to facilitate comparison across the years. They then examined key elements of each city's fiscal conditions, including revenue, expenditures, reserves, and long-term obligations.

Although each city had its own distinct experience, examining all 30 revealed several notable findings, including:

Explore data on revenue, expenditures, debt, reserves, and pension obligations for each of the 30 cities.

As cities look ahead, ongoing fiscal constraints at the state and federal levels could further diminish aid to local governments and add to an already shaky fiscal picture. Cities' unfunded retirement obligations put even more long-term pressure on their finances.