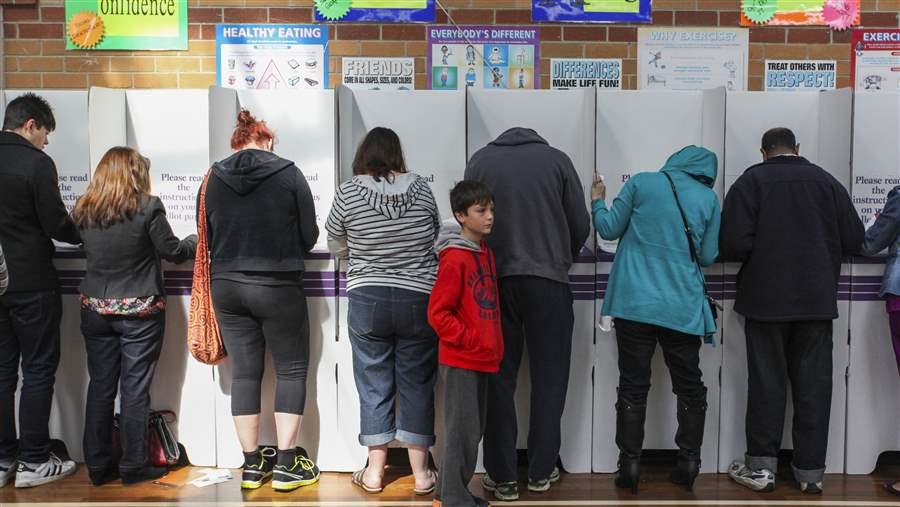 In 2013, The Pew Charitable Trusts unveiled the Elections Performance Index (EPI), which provided the first comprehensive assessment of election administration in all 50 states and the District of Columbia. The interactive tool introduced the index’s performance indicators, summarized 2008 and 2010 data, and ranked the states according to their overall EPI averages, or scores, which give users a way to evaluate states’ election performance side by side and over time. The second edition, released the following year, added data from the 2012 election and offered users their first opportunity to compare a state’s performance across similar elections, specifically the 2008 and 2012 presidential contests. Now, the EPI has been updated to include data from 2014, the fourth election to be analyzed in the series, allowing users for the first time to compare data from two midterm elections: 2010 and 2014.

The data show that, overall, states continue to improve, performing better in 2014 than four years earlier. Although voters turned out at the lowest rate in a midterm election since 1942, fewer military and overseas ballots were rejected, and more online tools were available to help citizens find essential information, such as where to vote and who was on the ballot. Additionally, more states offered voters the option to register online.

Key findings of the EPI’s 2014 analysis:

The findings reveal steps that states can take to make elections more cost-effective and efficient. Among the most valuable are collecting more and better data, implementing online voter registration and upgrading registration systems, and using polling place management tools to allocate resources and reduce wait times, all strategies recommended by the bipartisan Presidential Commission on Election Administration.2

This brief examines the latest EPI findings and highlights trends that have emerged from the expanding analysis as well as best practices that states should consider as they work to improve their administration of elections.

What Is the EPI?

The Elections Performance Index is intended to help policymakers, election administrators, and others:

Pew partnered with the Massachusetts Institute of Technology in July 2010 to bring together an advisory group of state and local election officials and academics from the country’s top institutions to guide development of the index. The advisory group held a series of meetings to select the best ideas from indices in other public policy areas, identify and validate existing data sources, and determine the most useful ways to group available data.

The EPI tracks 17 distinct indicators of election performance, selected for their completeness, consistency, reliability, and validity.* For more information on how the indicators were selected and computed, or additional analysis of their meaning, please see the online interactive report at www.pewstates.org/epi-interactive or the report’s methodology at www.pewstates.org/epi-methodology.

† The residual vote rate indicator is not measured for midterm elections because adequate data are not available to create a metric comparable to the rate used for presidential elections.

The addition of 2014 data to the Elections Performance Index makes it possible for the first time to compare a state’s performance over time and against other states in a midterm election. In general, state election administration improved between 2010 and 2014. This was true for the performance of individual states compared with prior years and nationwide on many indicators.

Nationally, states’ overall scores, which are calculated as an average of all indicators, increased 5.1 percentage points on average from 2010 to 2014.

Forty states and the District of Columbia improved their overall scores, compared with 2010:

The 24 states (plus the District) that improved more than the national average vary widely in size and region; they cover the political spectrum from deep blue to battleground to solid red.

States at the top and the bottom of the rankings showed improvement. Maryland—a founding member of the Electronic Registration Information Center (ERIC) in 2012—improved its score by more than 10 percentage points from 2010 to 2014. The state, which was already a solid performer, ranked 19th in 2010 and rose to ninth in 2014, in part by adding online voter registration and reducing its rejected registrations rate. The single biggest jump was in Mississippi, which raised its score by 19 percentage points from 2010. The gains were primarily the result of better data collection and reporting. The improvement is a good sign for Mississippi, but the state still has much work to do: Its EPI average was still well below the national average and among the lowest in 2014.

Although the national trend was clearly upward, not all the news was good. Ten states’ overall scores declined: Arkansas, Kentucky, Louisiana, New Mexico, North Dakota, South Dakota, Tennessee, Texas, Utah, and Wyoming. Despite its decrease, North Dakota, which was the top-performing state in 2010, remained first overall.

Over time, better data and a clearer understanding of the characteristics of these two groups will help all states identify the problems that most commonly hinder improvement and recognize truly effective election administration and policy.

North Dakota, Minnesota, and Wisconsin were among the top four states in each edition of the EPI. This consistently strong performance could be due, in part, to their voter registration policies. States that offer more convenient and efficient ways for voters to register and update their registrations minimize many common issues, such as rejected registrations, use of provisional ballots, and nonvoting due to registrations problems.

In the 2010 and 2014 midterms, as well as the two presidential elections analyzed in the EPI, seven of the 10 states with the lowest rates of registration difficulties or mail-ballot problems in 2014—Idaho, Maine, Minnesota, New Hampshire, North Dakota, Wisconsin, and Wyoming—allowed Election Day registration or did not require voter registration. Maine and Minnesota had the lowest rates of these problems, at approximately 1 percent.

Additionally, states that adopt online voter registration can increase the accuracy of their rolls while also reducing costs.* Twenty states and the District of Columbia allowed online voter registration in 2014—up from eight states in 2010—of which 10 were among the 15 highest-performing states overall. States using the latest technology to conduct data matching of voter registration lists, such as those participating in ERIC, have reduced the numbers of provisional ballots cast and rejected, as well as the proportion of wouldbe voters who fail to vote due to a registration problem.† Eleven states and the District were ERIC members in 2014, and eight of them were among the 15 highest-performing states in 2014.

The Presidential Commission on Election Administration recommends both online voter registration and participation in ERIC.‡

Eleven states—Alabama, Arkansas, California, Hawaii, Idaho, Kentucky, Mississippi, New York, Oklahoma, Texas, and Wyoming—and the District of Columbia ranked in the lowest 25 percent on the index in 2014. Eight of these—Alabama, California, the District, Hawaii, Idaho, Mississippi, New York, and Oklahoma—also ranked in the bottom quartile in 2010.

Importantly, because overall averages reflect the performance of other states, even dramatic improvement or decline within a state may not be reflected in its ranking relative to other states. As noted earlier, this is evident in the case of Mississippi but also of New York, which had a 17 percentage point increase in its score; California, which had a 9 point increase; and Idaho and Oklahoma, which each had 7 point increases. Even with their improvements, these states still fell into the group of low performers because widespread improvement elsewhere raised the national average significantly. This highlights the value of considering multiple points of comparison, made possible by the index: evaluating states against the national average, evaluating state against state, and evaluating a state over time.

Individual indicators reveal critical information about what is improving a state’s overall performance as well as what consistently holds a state back.

Nationally in 2010 and 2014, scores on nine of the 15 indicators improved, with notable gains in seven areas:3

Nationwide, averages for six indicators decreased in 2014, although most of the declines were marginal.5 Most notably, voter participation was at its lowest rate since World War II: Turnout decreased approximately 5 points, from 41.8 percent in 2010 to 36.7 percent in 2014.6

Nationally, the completeness of data that states reported on the Election Administration and Voting Survey (EAVS) has improved over the past four years. In 2014, 26 states and the District reported 100 percent complete data on the portions of the survey that are used for the EPI. This is a marked improvement from the 11 states (plus the District) that did so on the 2010 EAVS. The more complete the data collected by states, the better they can understand which aspects of election administration are working well and which need improvement.

In addition to compiling more complete data, state officials who improve the accuracy of the data they collect will be better able to understand how effectively their offices are functioning, which can spur innovation, increase efficiency, and ultimately lead to a better experience for voters. After comparing responses to the 2010 and 2014 EAVS, some states were able to uncover errors in their 2010 data, which led to updated rankings for that year:

The average reported wait time nationally was 3.8 minutes and the longest was 8.8 minutes in North Carolina. As expected with the much lower turnout that is typical of midterm elections, the reported wait times for 2014 were shorter than those in 2008 (14.4 minutes) and 2012 (11.9 minutes). The 2014 EPI is the first to include wait times to vote for a midterm election, so no points of comparison are available from the 2010 index.12

The results of the 2014 EPI suggest two key recommendations for states to continue upgrading their election administration:

The quality of state elections data has steadily improved since the first edition of the EPI, but many states still have room for improvement. A 2015 summit on elections data, hosted by the Election Assistance Commission, revealed persistent challenges to accurate data reporting.13

The difficulties often begin at the local level, where election administrators need better tools to maintain consistent records throughout the election cycle. Officials also need common definitions, so that, for instance, every jurisdiction in the state understands and agrees on what “rejected registration” means and records this measure consistently. State and local governments have also reported needing to maintain a second set of records to manage certain critical data points that their voter registration or election management systems could not record, a practice that increases the risk of error and is an inefficient use of limited resources.

Finally, administrators need to be thoughtful when developing the questions and creating processes they use to report data to the EAVS and other repositories. Queries should be checked for accuracy at regular intervals because data systems change over time.

Even states with low average wait times often have significant variation in the length of lines across jurisdictions and polling locations. One of the key missions of the Presidential Commission on Election Administration was to investigate the causes of long lines at polling places to help states and localities reduce the waits for voters.14 In response, researchers across the country produced several models to help election administrators predict the lengths of lines at the polls throughout the day and make decisions about the number of polling places and voting stations needed for each precinct. These tools are available to states free of charge through the commission’s website and can be customized with local data.15 Election administrators should take advantage of these tools to guide resource allocation and minimize lines on Election Day.

The Elections Performance Index provides an opportunity for policymakers, election administrators, and the public to see how states performed across elections and to evaluate changes or trends. The new edition adds data from the 2014 election, allowing users to compare midterm voting for the first time. Future iterations will offer still more opportunities to evaluate the state of U.S. elections over an extended time frame.

As data improve, the index will provide additional and more nuanced metrics to assess state performance. When states change their policies or administration, the index will be able to track the effect of those actions; as more is known about how elections run and how best to measure them, the indicators will be expanded and refined to better reflect the characteristics of effective, efficient election administration.

The Elections Performance Index provides an overview of all 50 states and the District of Columbia.