The Elections Performance Index was transferred to the MIT Election Data & Science Lab on Aug. 9, 2018. Please visit http://elections.mit.edu for information on the 2016 election and future updates.

Sorry, this visualization requires JavaScript. You can download the source data at https://dataverse.harvard.edu/dataverse/measuringelections

The Elections Performance Index, or EPI, is the first comprehensive assessment of election administration in all 50 states and the District of Columbia.

Using data from 17 key indicators, the EPI makes it possible to compare election administration policy and performance across the states and from one election cycle to the next.

Select a state to view its EPI performance

Select a state to the left to explore its overall EPI average and performance on individual indicators in 2008, 2010, 2012, and 2014. Within each state page, users also have the opportunity to compare across elections by type to see changes by indicator among the midterms: 2010 and 2014; and the presidentials: 2008 and 2012.

Select individual states or a predefined group to compare

Compare the performance of individual states, regions, and groups of states on each indicator during each election year. Select the "compare elections" option to see how states' indicator values changed between the 2010 and 2014 midterms and the 2008 and 2012 presidential elections.

Select an indicator to view its profile

Learn more about the indicators used to calculate the Elections Performance Index by selecting them on the left. See how performance on each indicator changes across election years.

Using data from the U.S. Election Assistance Commission’s Election Administration and Voting Survey, this indicator measures the percentage—out of all ballots cast—of absentee ballots that were rejected.

In 1988, only six states allowed individuals to cast an absentee ballot by mail without an excuse. By the 2008 election, that number had grown to 27.

Absentee balloting allows voters to cast a ballot at their convenience without having to go to the polls on Election Day, while also spreading election officials’ workload over a longer voting period.

Unlike in-person voters, however, who may have an opportunity to correct errors, absentee voters have no recourse to fix a ballot if a mistake is made. If there is an errant mark and a machine cannot read the ballot, there is a greater chance that the ballot will not be counted.

Further, because the overall EPI average is an average of all indicators, improvement on any one indicator, relative to other states, will not change the number much. A state that performs well on one indicator but close to average in every other will not, overall, perform at a level that is significantly different from the national average. Consequently, for a state's overall average to increase from one year to another, that state must do better across many indicators, relative to other states.

Presidential and midterm elections are not comparable using this interactive report because of significant differences in electorates, available data, and baseline scales. Additionally, of the 17 indicators of election performance, data are not collected for two—voting wait time and residual vote rate—during midterm elections, leaving 15 metrics and points of comparison for 2010 or 2014. For more information, please see the methodology.

The Elections Performance Index, or EPI, is intended to help policymakers, election administrators, and other citizens:

Pew partnered with the Massachusetts Institute of Technology to bring together an advisory group of state and local election officials and academics from the country’s top institutions to guide development of the index. The advisory group held a series of meetings beginning in July 2010 to select the best ideas from indices in other public policy areas, identify and validate existing data sources, and determine the most useful ways to group available data.

The index tracks 17 distinct indicators of election performance, which were selected from more than 40 prospective measures based on their completeness, consistency, reliability, and validity. For more information on how the indicators were selected and computed, please see the brief or the methodology.

Expand the indicator section to turn off/on certain indicators for the score calculation. 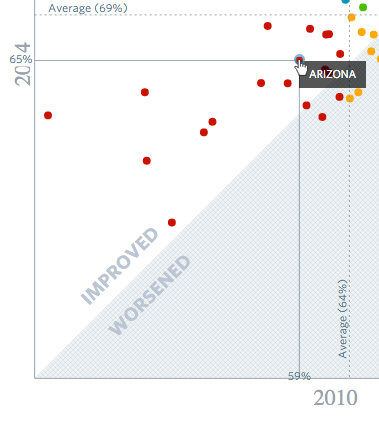 Hover over a state to see its EPI score for both years and voting eligible population if applicable. 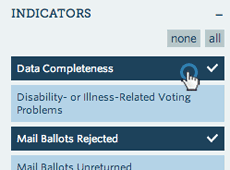 Click an indicator to recalculate the rank of each state.

Click on a year to display state rankings for that year.

Hover over the state in the map, state name label or bar to see the rank and indicator average for that state. A click will take you to the state's profile page. 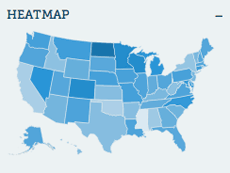 The colors in the map and bars represent the indicator average performance of the state for a particular year. The more intense the color, the better the performance.

The "Compare Years" view compares state rankings based on EPI score for election years 2010 and 2014 and 2008 and 2012. The thickness of the lines represents the amount of change in the indicator average. A blue line represents an improvement in the indicator average, while a red line indicates that the state has worsened. Hover over a state to see the corresponding rank location of that state in the other year. 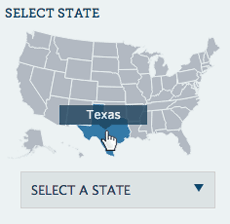 To start, select a state using the map or from the dropdown.

Click on a year to display state values for that year.

Click 'Value' or 'Rank' to switch between indicator values and the ranks of the state relative to all other states. 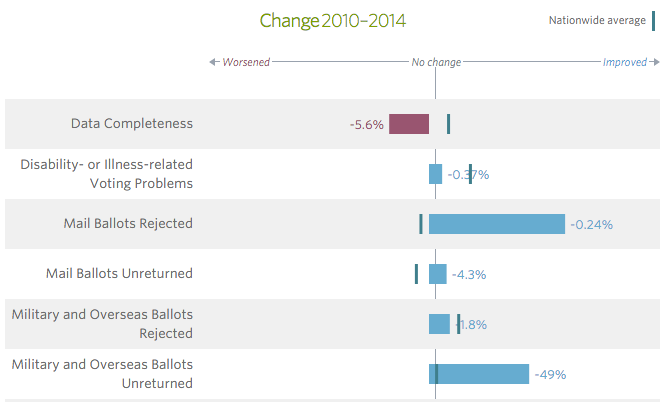 Click "Compare Elections" to display the change in indicator values comparing 2010 with 2014 or 2008 with 2012. Bars on the left-hand side of the "No change" line indicate that the state worsened, while bars on the right-hand side represent an improvement. 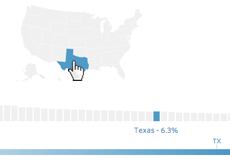 Hover over the map or the bars to reveal the state indicator value for that year.

Click on a year to display state indicator performance for that year. 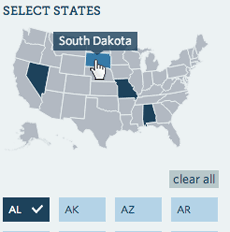 To start, select a state or predefined group. Click on addtional states and/or state average groups to see how they compare.

The minimum and maximum value for the selected year is shown at the start and end of the line.

For indicators that have a Yes/No value (eg. Online Registration Available), two lines are displayed. The width of the line is proportionate to the number of states with that value. 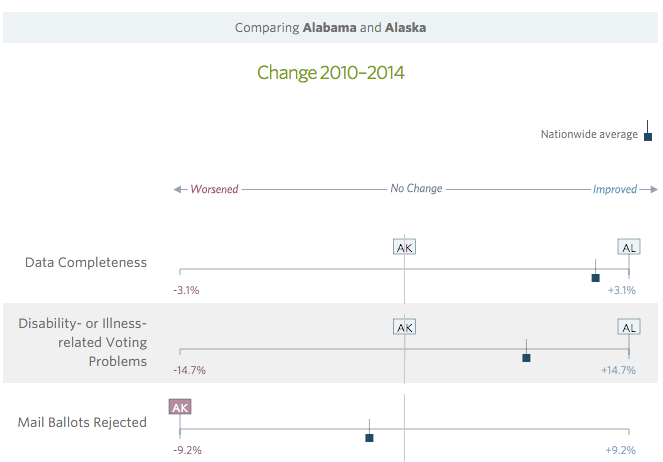 Click "Compare Elections" to display the change in indicator values comparing 2010 with 2014 or 2008 with 2012. The minimum and maximum change in value is displayed at the start and end of the line. When states and groups appear on the left-hand side of the "No change" line, that means the state or group worsened for that indicator, while the appearance of states or groups on the right-hand side indicates an improvement.

The Elections Performance Index has been updated to include data from 2014.

In 2013, The Pew Charitable Trusts unveiled the Elections Performance Index (EPI), which provided the first comprehensive assessment of election administration in all 50 states and the District of Columbia. The interactive tool introduced the index&rsquo;s performance indicators, summarized 2008 and 2010 data, and ranked the states according to their overall EPI averages, or scores, which give users a way to evaluate states&rsquo; election performance side by side and over time.