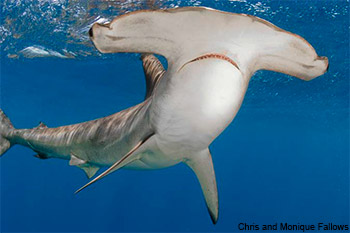 The scalloped hammerhead is subject to targeted fisheries, illegal fishing, and fishery bycatch throughout the world. It is exploited primarily to satisfy a growing global demand for its fi ns, which are some of the most valuable in the fin trade.

Hammerheads frequently aggregate in large numbers, which makes them even more vulnerable to fishing efforts. As a result, they are assessed on the International Union for the Conservation of Nature (IUCN) Red List of Threatened Species as Endangered globally and the United Nations Food and Agriculture Organization (FAO) assigns them to the lowest-productivity category, meaning that they have an extremely low reproductive capacity and are one of the ocean's most vulnerable species. Fisheries surveys in the northwest Atlantic have documented hammerhead loss of up to 98 percent, landings in the southwest Atlantic have declined by up to 90 percent, and declines of more than 99 percent have occurred in some parts of the Mediterranean Sea.

Although their distinctive body shape makes hammerheads easy to identify as a genus, it can be diffi cult to distinguish scalloped hammerheads from the similar-looking smooth (S. zygaena) and great (S. mokarran) hammerheads, especially when looking only at fins. Species-specific data are limited, but market-based scientific inquiries have yielded important trade information. Dealers have stated that hammerhead fins are some of the most valuable. The three hammerhead species combined make up approximately six percent of the identified fins entering the Hong Kong market. From this information, scientists have estimated that 1.3 million to 2.7 million scalloped and smooth hammerheads are exploited for the fin trade every year. A few countries and only one regional fisheries management organization (RFMO) have conservation or management measures for hammerheads, but RFMOs do not regulate international trade. According to a 2008 assessment of illegal, unreported, and unregulated fishing, hammerheads are among the shark species that are most often fished illegally. In September 2012, the scalloped hammerhead was included in CITES Appendix III. Appendix III requires that an export permit be issued for parts and products exported from the country that included the species in Appendix III (Costa Rica and Australia in this case). All other countries must issue a certificate of origin showing that it is not from the country that listed the species; but other scientific findings are not required.

A proposal to include scalloped hammerheads in Appendix II was submitted at CoP15 and was endorsed by the FAO, the CITES Secretariat, and TRAFFIC/IUCN. However, at that time, the proposal narrowly missed being adopted.

Although the recent inclusion of scalloped hammerhead sharks on CITES Appendix III is a positive step, an Appendix II listing is vital to ensuring that hammerhead sharks are protected throughout their range from overexploitation due to international trade. A CITES Appendix II listing for scalloped hammerheads would greatly improve the future health of populations by regulating international commerce in their products, ensuring trade occurs only from sustainable and legal fi sheries, and enhancing data-reporting and enforcement efforts.