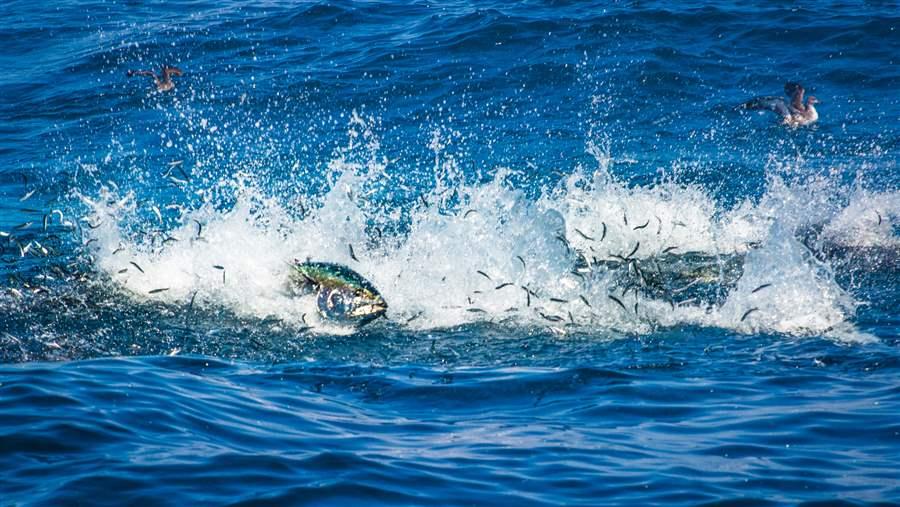 The Pacific bluefin tuna is one of the most valuable fish in the world, but the latest stock assessment finds that it remains heavily overfished.

This week, the scientists who evaluate the health of Pacific bluefin tuna, one of the most iconic and valuable fish species in the world, released a new stock assessment that shows the population at just 3.3 percent of its unfished level. This confirms the species’ severely depleted status and points to the continued need for more effective management of the fishery.

Although the assessment found that the population had increased slightly in the past two years, from a low of 2.6 percent of its unfished size, that cannot obscure the perilous position the species is in due to years of overfishing, which continues today.

The assessment, conducted by the International Scientific Committee for Tuna and Tuna-Like Species in the North Pacific Ocean, reveals that most of the recent catch has been composed of juvenile fish—that is, those too young to reproduce. Taking fish out of the water before they have a chance to reproduce bodes poorly for the population’s future.

And despite the heavily depleted status of the stock, the overall catch rose between 2015 and 2016 as four of the five main fishing nations exceeded their quotas.

The report points out that the estimated number of Pacific bluefin spawned in 2016 was more than double that in 2015 but only slightly above the average over the past 50 years. More troubling, this one data point is the main driver of the estimates of current and future growth. Basing management decisions on a single estimate is very risky because the data haven’t been verified by other sources and are thus highly uncertain.

What’s the main takeaway from this assessment? There is still much work to be done to rebuild Pacific bluefin. Because its migrations cross the Pacific Ocean from Japan to the United States and Mexico, the species is jointly managed by the Inter-American Tropical Tuna Commission (IATTC) and the Western and Central Pacific Fisheries Commission (WCPFC). Those bodies should not use this tiny increase in abundance as a justification to increase fishing, especially since the species is in only the early stages of rebuilding, assuming the assessment is corroborated. IATTC and WCPFC managers must take a science-based approach to ensure that the population is indeed on the road to recovery and must agree on a Pacific-wide harvest strategy that includes precautionary objectives and pre-agreed rules for managing the fishery.

Along with stricter, proactive approaches to Pacific bluefin management at the WCPFC and IATTC, the leading fishing nations for this species—Japan; Mexico; South Korea; Taiwan, Province of China; and the United States—must show they take the rebuilding effort seriously and take steps to ensure that their fishermen do not continue to exceed their catch limits. Quota overages threaten the success of any rebuilding plan and the future viability of the species.

The assessment estimates that Pacific bluefin abundance has risen by less than 1 percentage point, well within the margin of error of the study. By any definition, the species is still severely depleted, and any premature and unfounded increase in catch will hinder recent progress.

Fisheries managers should await further assessments before raising catch limits and should focus their efforts in the meantime on improving compliance and making good on their commitment to the Pacific bluefin’s recovery.

Amanda Nickson is the director of international fisheries for The Pew Charitable Trusts.