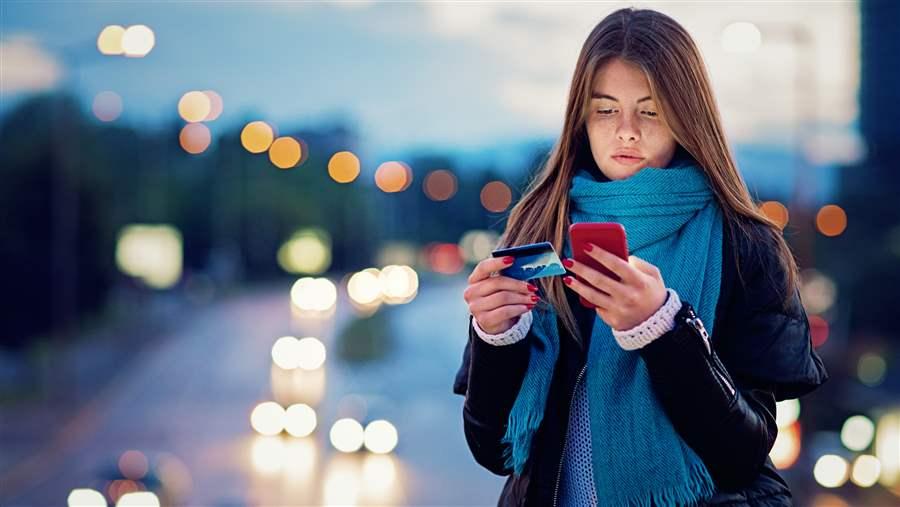 Modern life moves at the touch of a button, but the speed of financial transactions often cannot keep up. Electronic payments made with a debit or credit card or via a mobile app often appear instantaneous, but the recipient typically does not get the money for a day or more. And today’s consumers do not have one quick and convenient way to pay for things that is accepted by everyone, everywhere. A faster, universally accepted payments system would eliminate the wait that many consumers and businesses face before they can access their money, but it is not the answer to every issue—such as banks charging excessive overdraft fees—and it is unlikely to be available to those who do not have smartphones or bank accounts.

Americans increasingly make payments via multiple systems, such as paying bills electronically and using debit and credit cards and mobile apps to make purchases online and in stores. However, those transactions are generally processed only on business days, which exclude weekends and holidays, so funds often are not available for several days. Further, no single electronic payment option exists that all people and companies can use. As a result, most consumers still need to carry cash or checks, but these traditional payment methods come with problems of their own. Cash is particularly vulnerable to being lost or stolen, and although funds from checks can be available the next business day, they can take longer, depending on the amount of the check and whether it was deposited in person, at a branch, through an ATM, or with a bank app. Further, nearly a third of households receive income via check or money order, and if those are deposited on a Friday, the funds typically will not be usable until at least Monday, leaving customers who are short on cash at risk for expensive overdraft or check-cashing fees.

To begin to address these issues, the Federal Reserve recently convened the Faster Payments Task Force, but the success of this effort will hinge on whether a new system can effectively resolve problems in the market and gain broad adoption by all stakeholders. Achieving these goals will require that consumers feel confident in and comfortable with a new system; that companies view uptake as valuable; and that the process is beneficial for all users. For example, widespread consumer use of today’s most common electronic transaction systems—card and Automated Clearing House networks—has driven most businesses to accept credit and debit payments to avoid losing customers. Faster payments will need similar acceptance by firms in order to flourish. At the same time, consumers will need to trust that the process is safe and secure and find it easy to use; if a smartphone is required—which is likely­—adoption will be limited. Finally, to provide a meaningful improvement over today’s payment options, a faster system will need ubiquity of receipt—near-universal acceptance among businesses and financial institutions—to ensure that money sent can be quickly and dependably to all users.

The Federal Reserve convened its Faster Payments Task Force in May 2015, bringing together more than 300 stakeholders from financial institutions, payment providers, consumer groups, regulators, businesses, and consultants. The group developed seven “Effectiveness Criteria” to provide guidance on the most important aspects of an improved payments system: ubiquity, efficiency, safety, security, speed, legal, and governance. The task force’s work culminated in two reports, “The U.S. Path to Faster Payments” and “Faster Payments Task Force; Final Report Part Two: A Call to Action.” The latter report included 16 proposals from various financial firms and set the ambitious goal of creating a real-time system through which funds could be received by any financial institution by 2020.

For faster payments to effect meaningful change in the way Americans pay and get paid, a new system will need to achieve high rates of adoption and ubiquity of receipt by consumers, merchants, and financial institutions. One of the most significant barriers to success is adoption: Most existing proposals would require the use of a smartphone, but many consumers do not have one. The task force’s report indicates that mobile technology is not an essential component of an effective faster payments system, and a few companies have proposed models that would allow customers to make payments at kiosks in brick-and-mortar stores, or with a basic cellphone or an internet-connected device. The Pew Research Center found that 23 percent of U.S. adults—and 54 percent of those 65 and over—did not have a smartphone at the beginning of 2018. This means that any payments process that requires smartphone technology would exclude more than 50 million Americans, many of them seniors, from the start.

Further, The Pew Charitable Trusts found that even among smartphone owners, only 32 percent had made a purchase and just 14 percent said they had sent or received money using a mobile app. In addition, 70 percent of respondents cited loss of funds and identity theft as concerns that might prevent them from using a mobile payments system.

A faster payments process could also provide a new way for the nearly 37 million consumers in the U.S. without accounts—the unbanked—to send and receive money. Although most of the proposals outlined in the task force’s second report would require a bank account, some focused on serving the unbanked by enabling cash deposits or transfers at kiosks or retail stores. According to the Federal Deposit Insurance Corp., 30 percent of unbanked households used check cashers in 2015, and 43 percent paid for money orders. Many unbanked consumers transact largely in cash, which leaves them vulnerable to theft and loss of their funds, and some deliver payments in person. Serving this population would be key to reducing the use of cash generally and would potentially decrease costs and increase payment efficiency for unbanked consumers.

Faster payments will not end overdrafts

Faster availability of funds would not protect against all overdraft fees (typically around $35 per transaction that overdraws an account), especially for consumers who struggle to make ends meet on a regular basis. Originally, banks intended—and regulators treated—overdraft as an occasional courtesy, but today banks make billions of dollars from the fees, most of which are collected from just 9 percent of accounts. Pew’s research shows that about 75 percent of overdrafters had trouble paying monthly bills in the past year; a third rely on overdraft for short-term credit, despite extremely high borrowing costs; and most do not know they have the right to have debit card transactions declined at no cost, even though they would prefer to do so.

A faster payments system would provide immediate access to funds and could offer relief for those who overdraw simply because their deposits are not available quickly enough. However, it would not help address the problems associated with consumers’ poor understanding of overdraft policies and practices or their need for access to affordable small-dollar credit. Resolving these issues will require better disclosure of account holders’ legal rights, limits on penalty overdraft fees, and regulatory guidance to allow banks and credit unions to offer safe small installment loans.

In 2017, the Faster Payments Task Force challenged stakeholders to build a better, universally accepted system within three years. To achieve this, a governance structure that can “make decisions to facilitate cross-solution payments and to achieve broad adoption; safety, integrity, and trust; and interoperability” is needed. The regulatory framework and the infrastructure for payments must be re-examined and laws changed or clarified as needed to avoid gaps and ambiguities. Advanced fraud detection and reporting mechanisms will also be paramount to ensuring that the new system is safe and secure. Although the task force has concluded its work, the Federal Reserve will continue to focus on faster payments to foster collaboration and transparency in the field.

Thaddeus King is an officer and Rachel Siegel is a senior associate with The Pew Charitable Trusts’ consumer finance project.