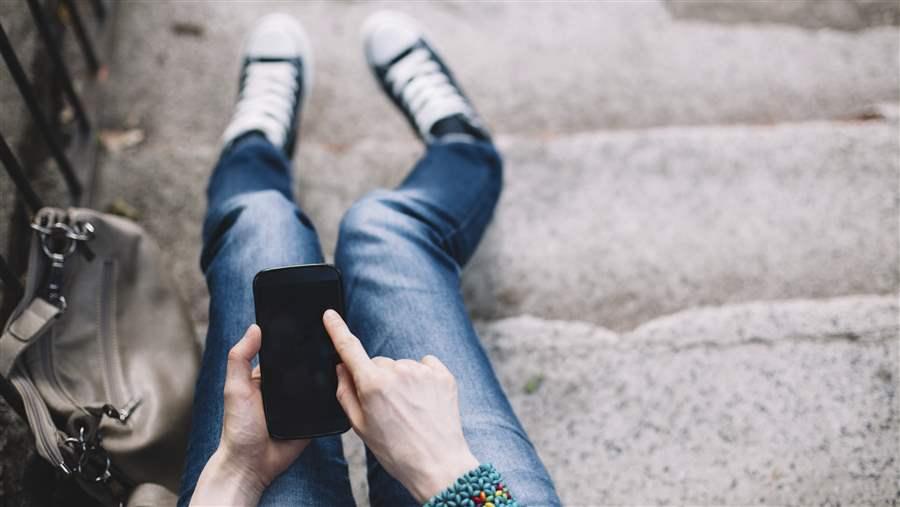 Mobile payments technology allows customers to make online and point-of-sale purchases, pay bills, and send or receive money from their smartphones via the Web browser, an app, or a text message.1 Mobile payments use has become widespread: Forty-six percent of U.S. consumers report having made a mobile payment, which translates to approximately 114 million adults.2 Expansion in the use of mobile payments over time has corresponded with an increase in smartphone ownership. In 2011, 44 percent of cellphones were smartphones.3 By 2015, the share had increased to 76 percent.

The charts that follow delve into these findings and highlight the advantages that consumers associate with mobile payments usage and the barriers that may prevent people from adopting or safely using this technology. 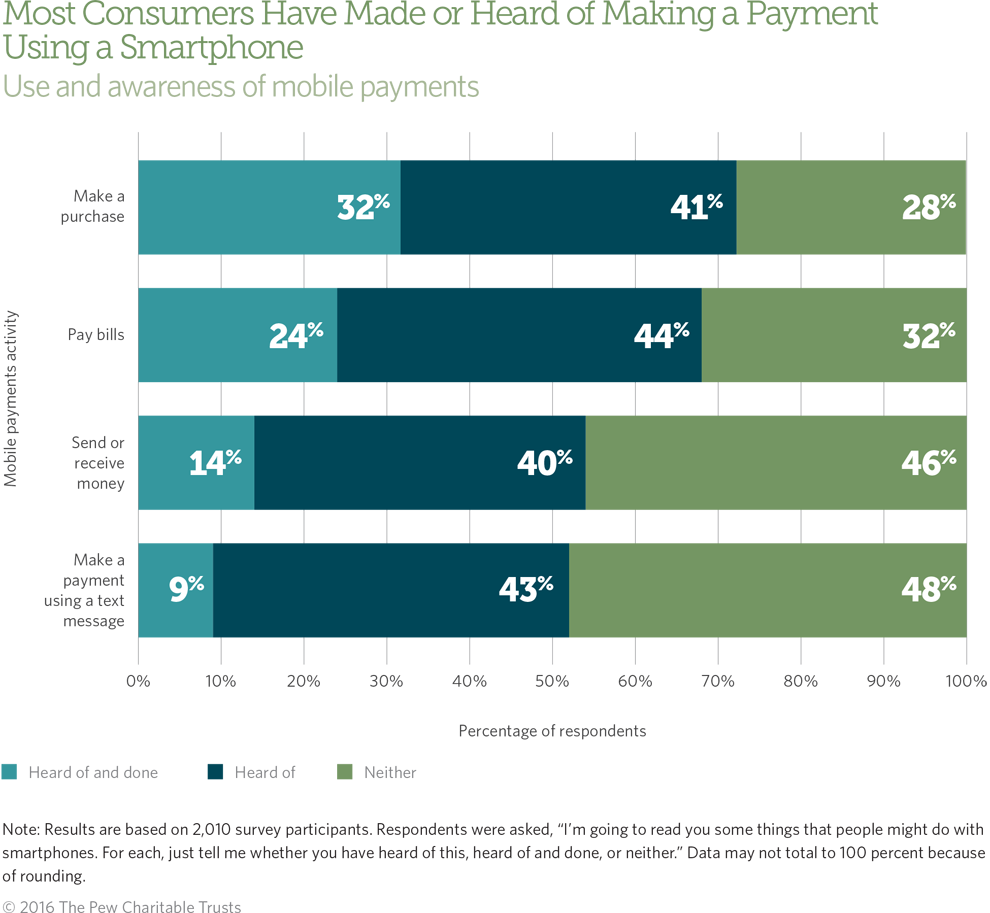 Many consumers, including a large number who have never made a mobile payment, have heard of different mobile payment activities, such as using a smartphone to make online or point-of-sale purchases or pay bills. 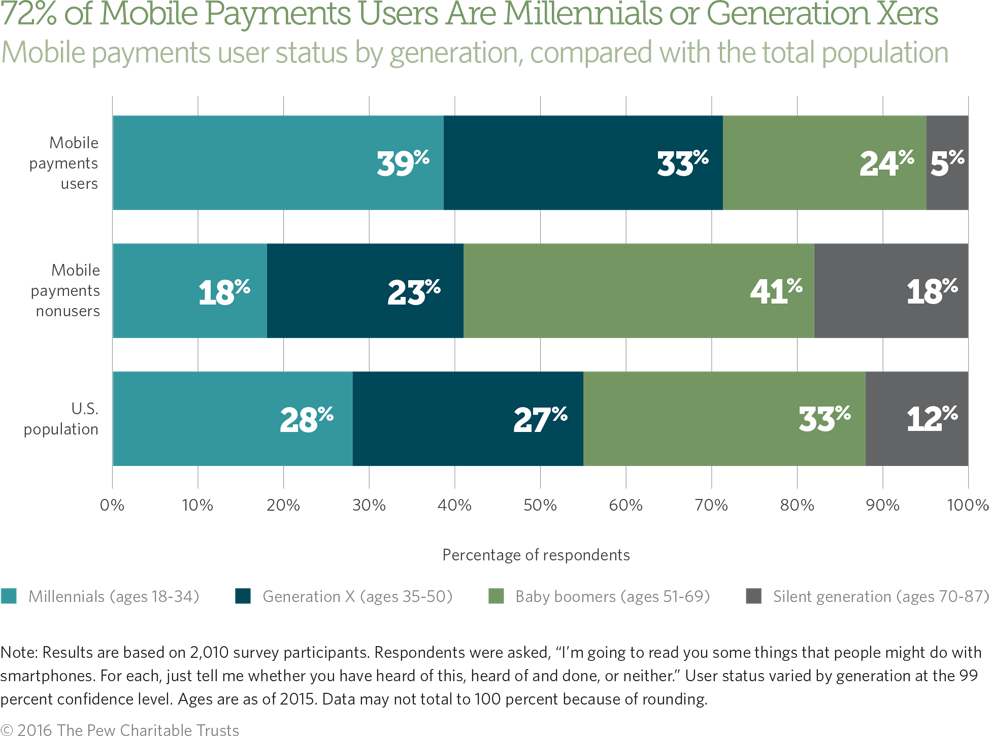 Mobile payments users are consumers who have made an online or point-of-sale purchase, paid a bill, or sent or received money using a Web browser, text message, or app on a smartphone. Users are more likely than nonusers to be millennials or Generation Xers, live in metropolitan areas, and have bank accounts and college or postgraduate degrees. Of these demographic categories, age is the most predictive of mobile payments use, particularly as it relates to smartphone ownership.4 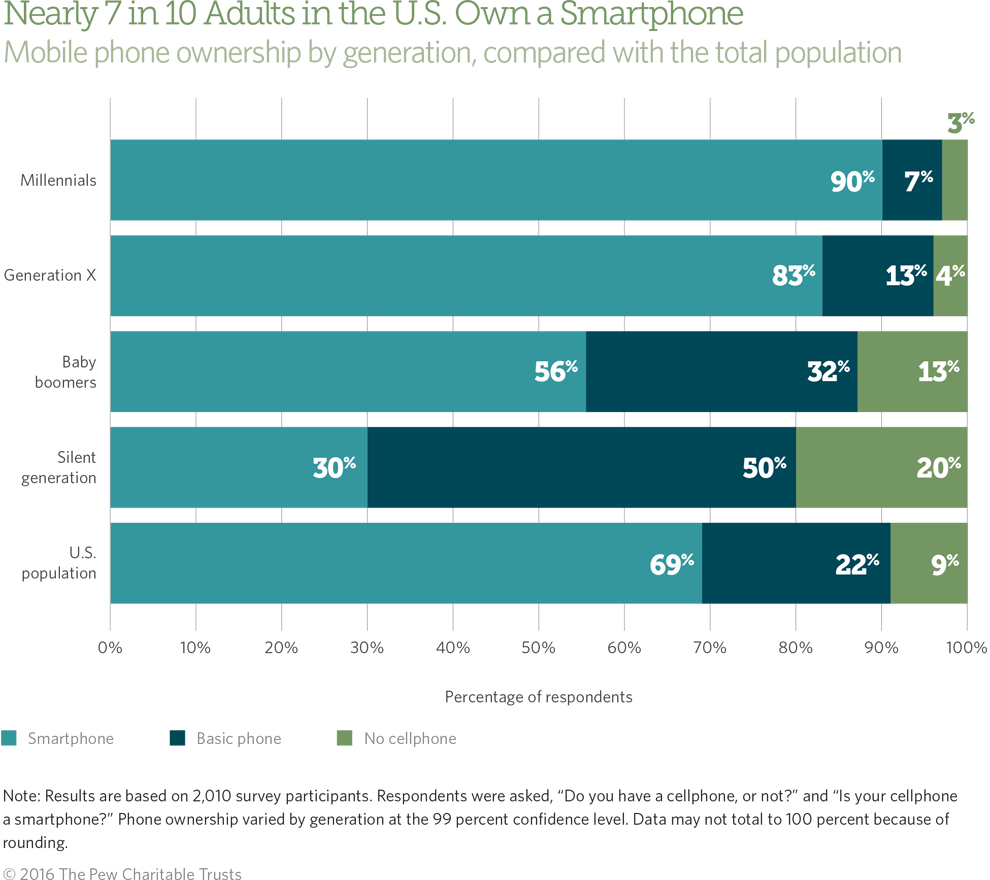 Getting a smartphone is the most common catalyst cited for adoption of mobile payments technology, and millennials and Gen Xers are far more likely than those from older generations to own smartphones.5 The majority of basic phone owners (77 percent) say they are unlikely to buy a smartphone in the next year, meaning the age gap in smartphone ownership will probably persist. Smartphone ownership also varies dramatically by annual household income. Only 53 percent of consumers earning less than $25,000 annually own a smartphone compared with 81 percent of those earning $50,000 or more annually. 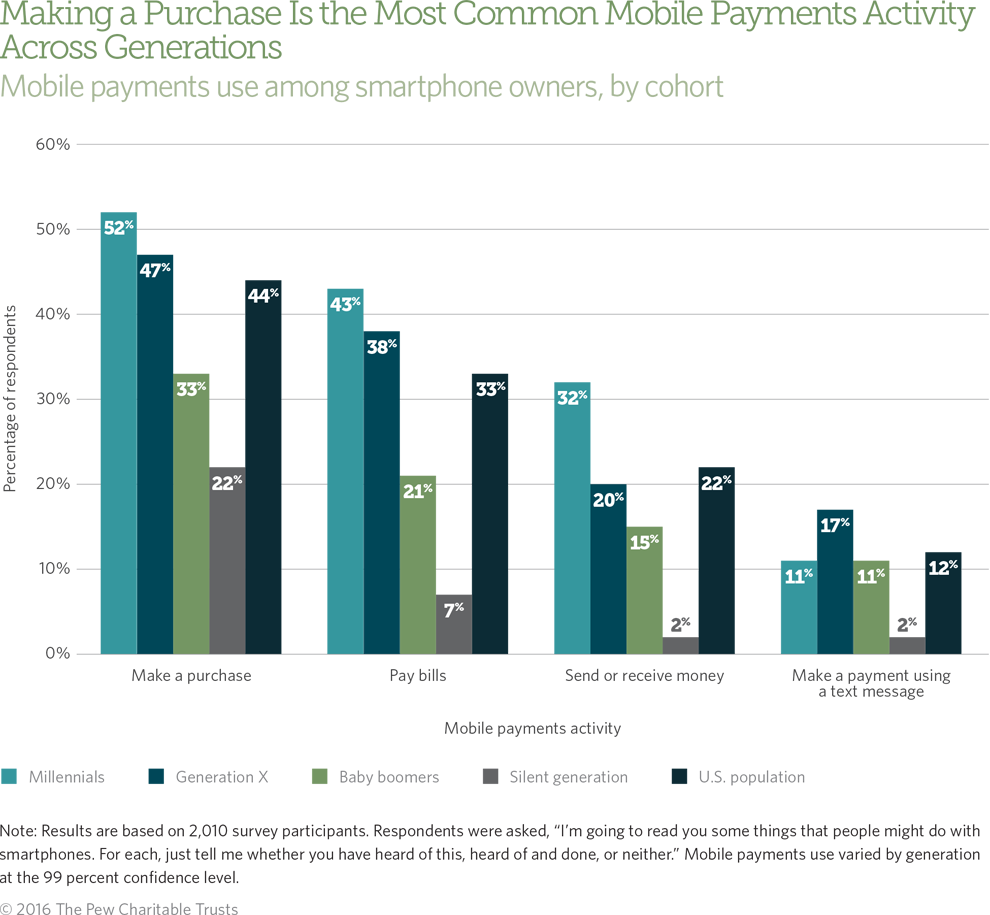 Mobile payments use varies by type of activity and with age, with more millennials having used their smartphones to make a purchase through a smartphone Web browser or downloaded app than to send or receive funds. Overall, few consumers make payments or donations by sending text messages. PayPal’s smartphone app is the most commonly used, ahead of Google Wallet, Apple Pay, and the Starbucks and Dunkin’ Donuts apps, and millennial and Gen X smartphone owners are more likely than those from the baby-boom or silent generations to have used these apps, except for Dunkin’ Donuts. 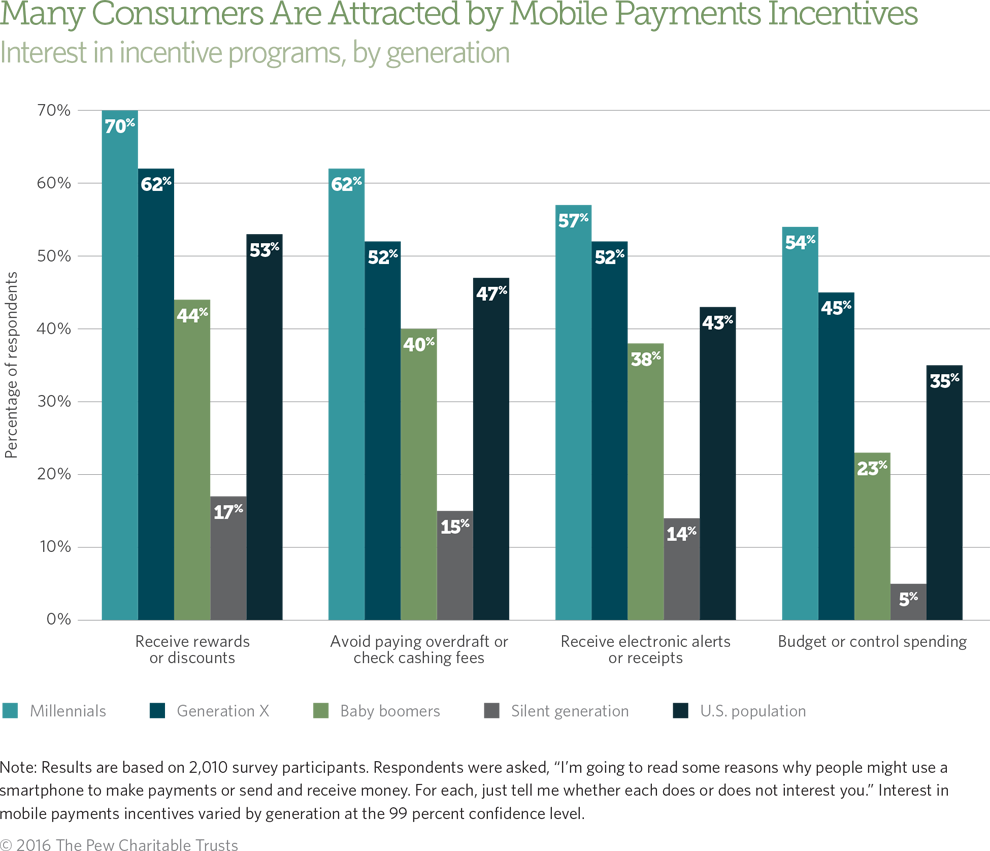 Millennials and Gen Xers in particular are motivated to use mobile payments in part because they like receiving rewards, discounts, alerts, and electronic receipts. Consumers are also interested in avoiding fees, such as overdraft or check cashing fees, and using their smartphones to help them budget. In fact, research shows that consumers are using smartphones to help with budgeting more than in previous years.6 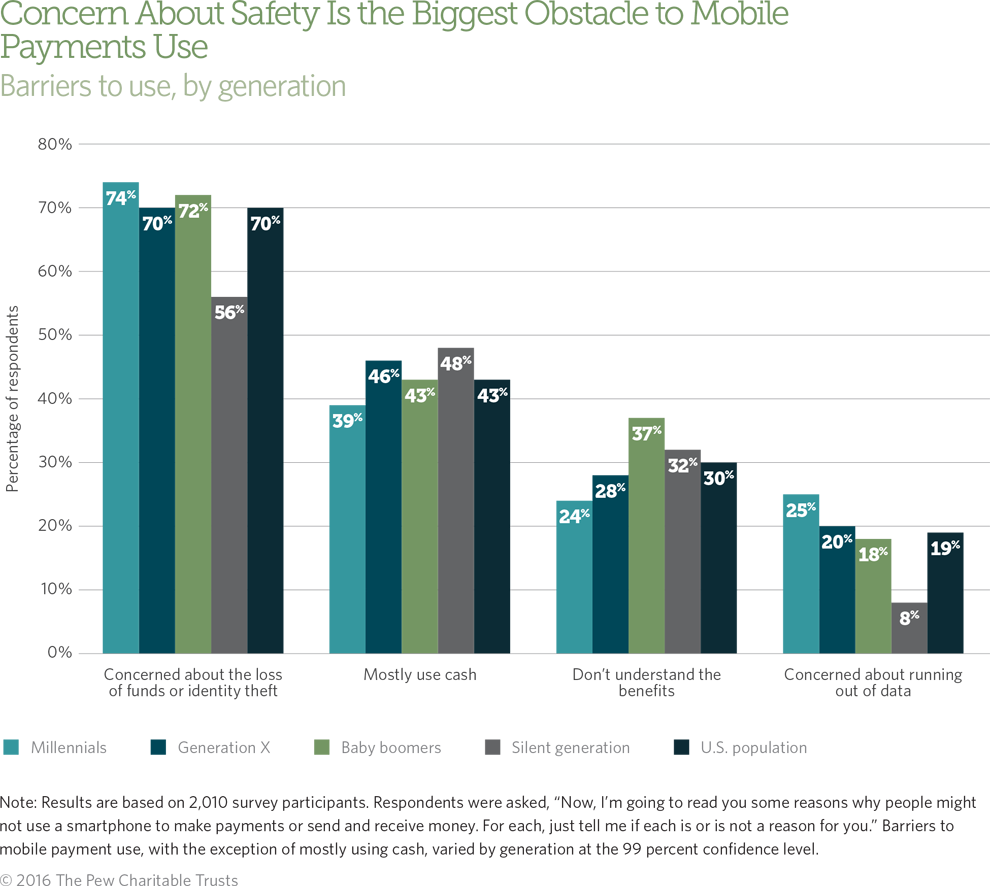 Consumers cite a variety of barriers to mobile payments use; the most common is concern about safety, specifically the risk of identity theft or loss of funds. Some obstacles vary by generation, with older consumers being less informed about the benefits of mobile payments and millennials being especially concerned about running out of data on their phone plans. The use of cash to make payments is cited across generations as a barrier, because cash cannot be easily loaded onto a smartphone. Cash is still a very common payment method, and consumers average about 8.5 retail cash purchases a month.7 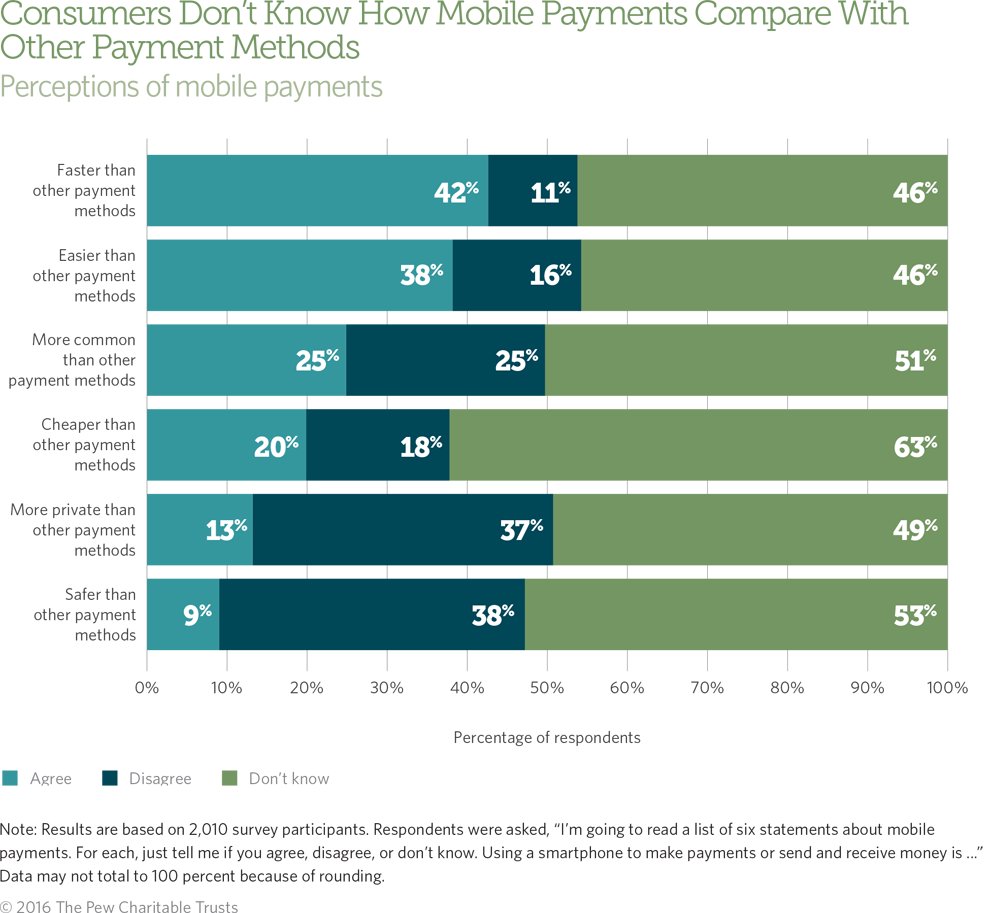 Nearly half of respondents say they don’t know whether mobile payments are faster, easier, or more private than other transaction types, and even more do not know if mobile payments are more common, cheaper, or safer. Reducing this uncertainty, especially about the safety of the technology, could increase use.8 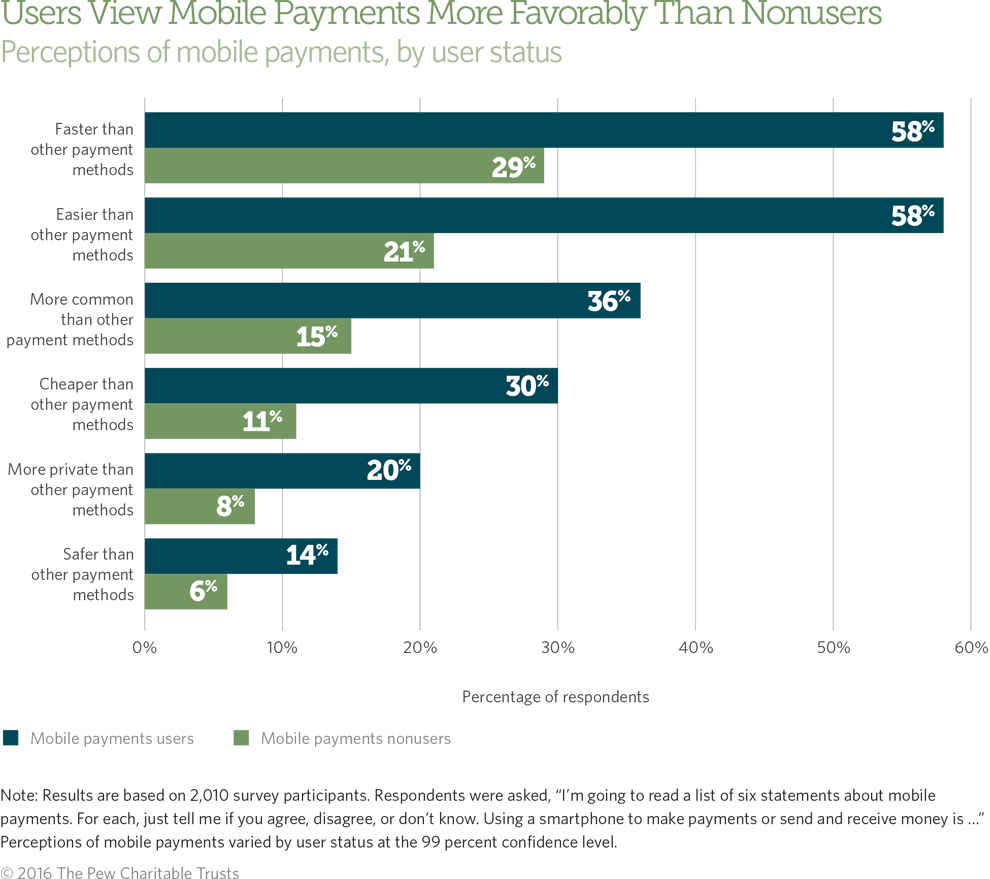 Mobile payments use is related to more favorable perceptions of the technology in terms of convenience, cost, privacy, and security. Users agree more often than nonusers that mobile payments are faster, easier, more common, cheaper, more private, and safer than other payment methods. 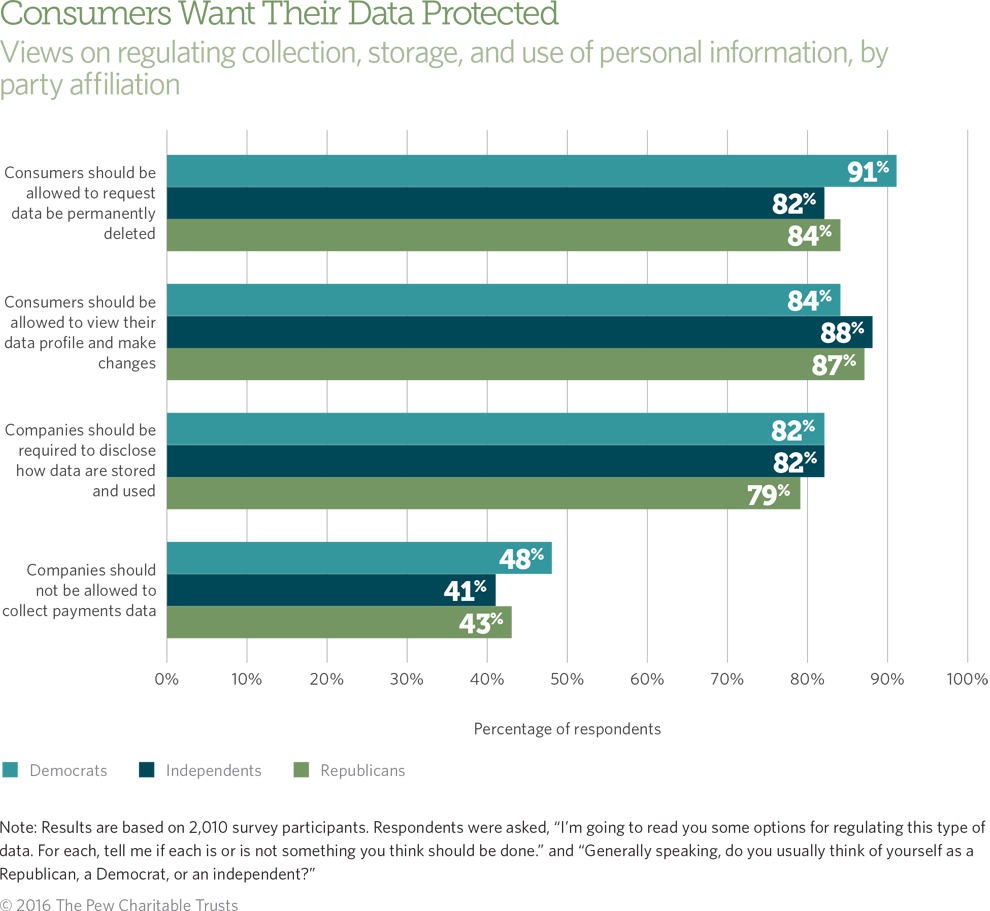 Consumers often assume that financial institutions, retailers, and others are collecting information about them, including tracking their locations when they execute financial transactions.9 In the focus groups, a number of consumers expressed moderate discomfort with the sharing of their personal information.10 About 8 in 10 survey respondents, with general consistency across political parties, say that steps should be taken to regulate how data are collected, stored, and used. 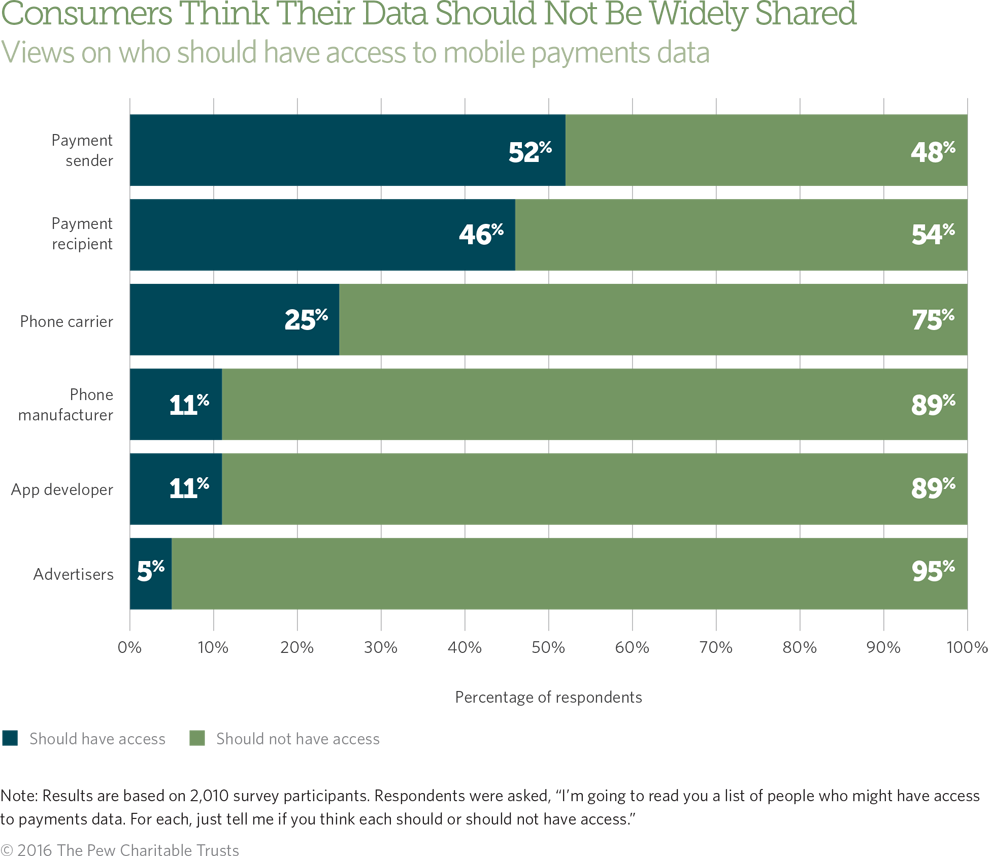 In focus groups, participants were generally unaware of which personal data are collected when they conduct mobile transactions or how those data are used.11 They also did not know whether or to what extent their privacy is compromised. When asked specifically who they think should have access to these data, only about half of respondents say that the payment sender should have access, and far fewer (5 percent) agree that advertisers should have access.

Age explains some but not all attitudes about mobile payments. About 90 percent of millennials and 83 percent of Gen Xers own smartphones, and individuals in these generations constitute the majority (72 percent) of mobile payments users. They are especially compelled by the option to receive rewards, discounts, alerts, electronic receipts, and help with budgeting and to avoid fees and are the most likely age groups to say mobile payments are faster and easier than other payment methods.

Across generations, concern about the safety of mobile payments technology is the biggest obstacle to use. Specifically, consumers are concerned about the potential for identity theft or loss of funds. Consumers of all ages cite the use of cash as a payment method as a barrier, because cash cannot be easily loaded onto a smartphone. And customers often don’t know how mobile payments compare with other payment methods in terms of convenience, cost, privacy, and security.

The growing mobile payments market has the potential to provide a convenient, affordable way for Americans to transact and manage their money. Yet concerns and uncertainty about the safety of mobile transactions and the lack of systems for depositing cash directly onto mobile websites and smartphone apps may be holding back this technology. Addressing these deficiencies could increase adoption, allowing consumers to take full advantage of the potential of mobile financial products to deliver safe and secure transactions.

On behalf of The Pew Charitable Trusts, Social Science Research Solutions (SSRS) conducted a nationally representative random-digit-dialing telephone survey of 2,010 adults from Oct. 2 through Nov. 3, 2015. The margin of sampling error, including the design effect, is plus or minus 2.6 percentage points. SSRS conducted 1,029 interviews via cellphone and 132 in Spanish. 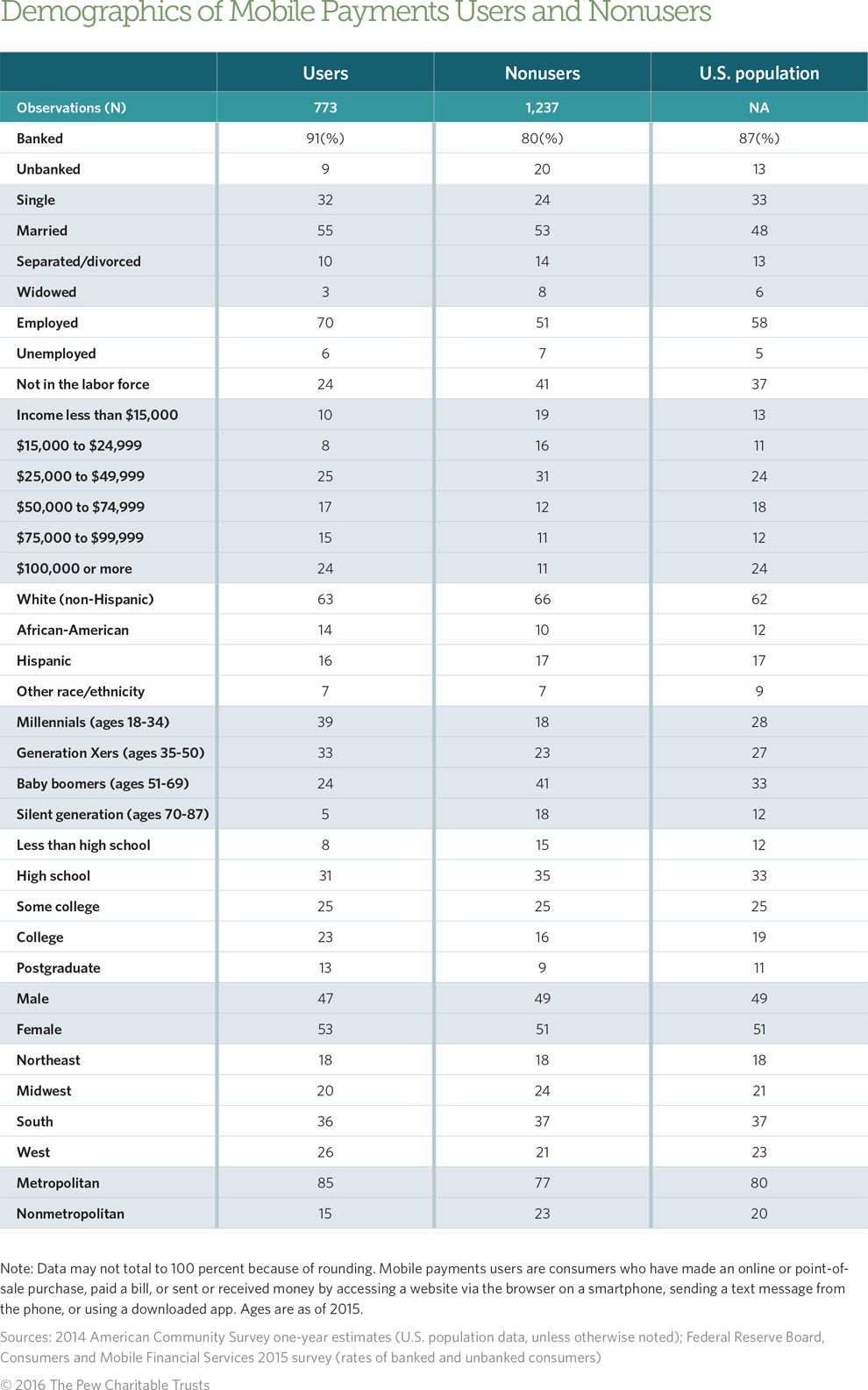 Mobile Payments: The Good, the Bad, and the Confusing

Ever use your smartphone to pay for parking or split the dinner bill with a friend? More people are using their phones as a mobile wallet and most mobile transactions work just fine. But with technology constantly evolving the rules that should protect consumers simply haven&rsquo;t caught up.

Who Is Regulating Mobile Payments?

Every day, Americans use their smartphones to transfer money, pay for goods and services, and make donations. These transactions are collectively referred to as mobile payments. This infographic provides an overview of the many federal agencies that oversee the mobile payments marketplace, including payment processors and products.