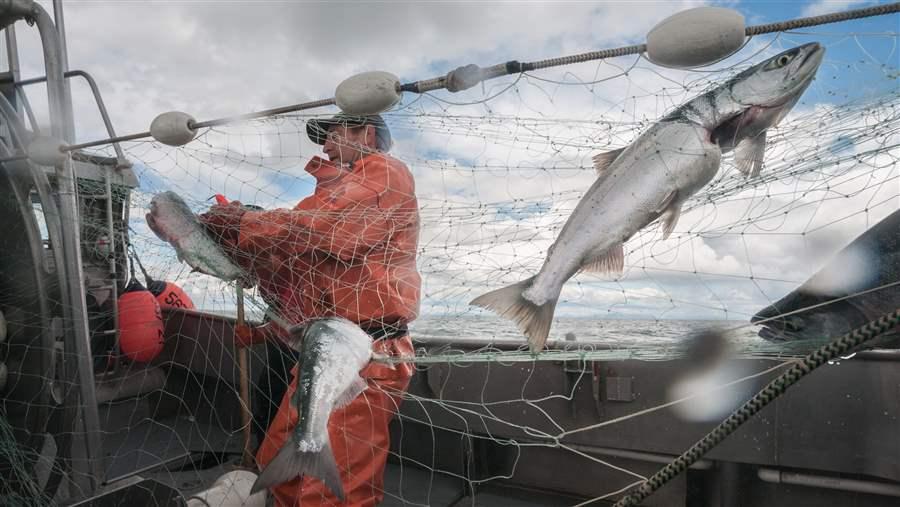 Alaska’s Bristol Bay is our nation’s most productive fishing ground and home to many important species, such as this sockeye salmon from the Naknek River.

The 2019-24 Outer Continental Shelf draft program lays out plans for offshore oil and gas drilling for nearly all U.S. coastal waters. At the same time, Secretary Zinke proposed rolling back safety regulations on offshore drilling—including Arctic-specific standards put in place after the 2010 Deepwater Horizon blowout that killed 11 workers and released 4 million gallons of oil into the Gulf of Mexico. Rolling back those regulations would endanger crews and the environment.

The administration’s proposal had a notable exception: Alaska’s Bristol Bay, the heart of one of America’s most productive fishing grounds, would remain protected from drilling. The region supplies more than 40 percent of the seafood caught in the United States, and the largest wild sockeye salmon run in the world funnels into the Bay and nearby rivers every year. The people of Bristol Bay and the seafood industry worked for more than 30 years to secure their fishing grounds and cultural heritage from future offshore oil and gas leasing.

Sadly, other areas in the Arctic would not fare as well under the plan, which proposes an unprecedented expansion of offshore leasing in the northern Bering Sea, the Arctic Ocean’s Beaufort and Chukchi seas, and elsewhere.

Despite vocal opposition from the 76 tribes whose members have been living along the northern Bering Sea for millennia, the plan proposes six lease sales in the region. The northern Bering Sea includes some of the world’s most productive marine waters and is home to one of the largest migrations of marine mammals on Earth. “The people of the northern Bering Sea rely on the waters off our coast for subsistence and survival,” the Bering Sea Elders Group noted in a news release, “and we will not stand by while our way of life is threatened.” With little oil or gas potential, this ecologically and culturally significant area should not be included in any leasing program.

Further, in the Arctic Ocean there are more than 180,000 acres already leased for oil and gas and ongoing oil production in both federal and state waters of the Beaufort Sea , so there is no need for new lease sales to be offered in the next five years. At a minimum, the leasing plan must protect the Arctic Ocean’s sensitive habitats, which are essential for the health and resilience of the ecosystem.

America’s Arctic waters—which support livelihoods, traditions that have been practiced for thousands of years, and marine mammals such as bowhead whales and walruses found nowhere else in the United States—are already under stress from a changing climate and increasing industrial activities. The Pew Charitable Trusts is not opposed to all offshore drilling but believes a balanced and careful approach to development must be put in place, particularly for vulnerable and potentially dangerous regions like the Arctic. Such plans must account for environmental protections, as well as the social, cultural, and subsistence needs of the indigenous communities that depend on a healthy Arctic.

We urge the administration to work with local stakeholders, tribes, scientists, and elected officials to remove from the 2019-24 proposed final program areas that are vital to the health of the larger Arctic marine ecosystem and to minimize potential impacts from offshore development by adhering to Arctic-specific safeguards.

This post has been updated to add detail on the environmental threat of offshore drilling.