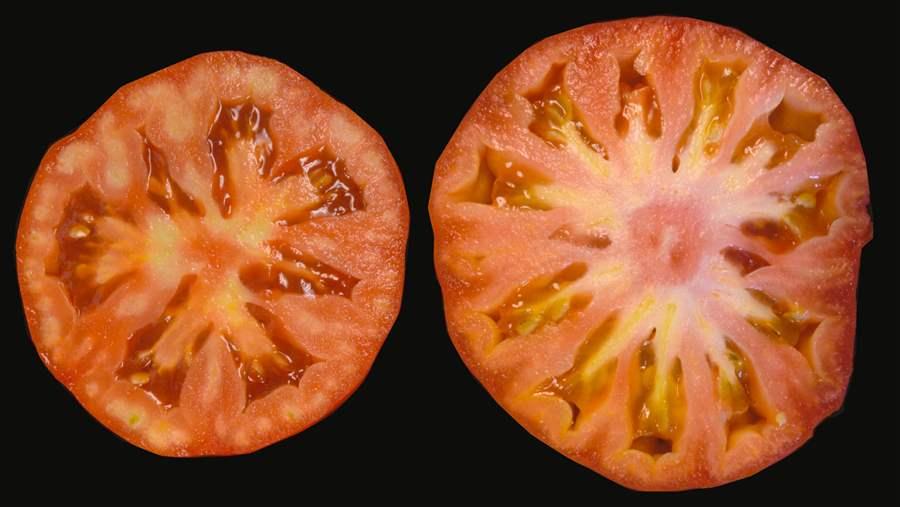 These tomatoes were genetically engineered to increase the number of locules, or internal compartments, and overall size.

The genetic engineering of crops is not a new concept—for millennia, farmers attempted to cross plant varieties to improve flavor and yield. However, it was not until the 19th century that Gregor Mendel—an Augustinian friar known as the “father of modern genetics”—discovered that certain traits could be passed down from one generation to the next through genes. Mendel spent eight years experimenting on crossing pea plants to identify and learn about genes that control important traits such as seed size, plant color, and height.

Today scientists are building on these early insights with new tools that can efficiently generate crops with the most-wanted traits for higher yields.

Daniel Rodríguez-Leal, a 2016 Pew Latin American fellow working with Zachary Lippman at Cold Spring Harbor Laboratory, is harnessing the power of genome editing to improve crops. Reported in the September issue of the journal Cell, Rodríguez-Leal utilized the CRISPR genome-editing technology to manipulate sequences within the promoter of genes that are important to yield. Promoters are regions of DNA adjacent to a gene, which can act like a dimmer switch to control when, where, and at what level these genes get activated during plant development.

By making small changes to these regions, Rodríguez-Leal was able to rapidly generate a myriad of variants important to the overall yield of tomatoes: plant architecture and shape, and fruit size. The team discovered that by using CRISPR to modify the promoters instead of the genes, they were able to fine-tune the output of yield genes. In one example, the researchers observed how overall yield changed as a result of altering the number of floral organs and locules (the gelatinous seed cavities within the tomato), which can determine just how big the fruit will grow.

Rodríguez-Leal’s approach circumvents laborious and time-consuming methods of traditional plant breeding to generate subtle genetic varieties much faster, and it could work on other food crops as well. The research has the potential to provide a catalog of beneficial plant variants that growers could use to immediately select the best growth traits and adjust them during future growing seasons.

Pew biomedical fellows discuss the benefits of training in the U.S.

For more than 25 years, Pew has helped outstanding biomedical scientists from Latin America pursue postdoctoral training and research opportunities in the United States. Pew supports fellows selected for the program for two years under the mentorship of some of the most distinguished investigators in their fields, and awardees who subsequently return to Latin America receive additional funding to help purchase equipment and supplies to launch independent labs. About 70 percent of program participants have taken advantage of this incentive and are conducting basic biomedical research on emerging health challenges in eight Latin American countries.