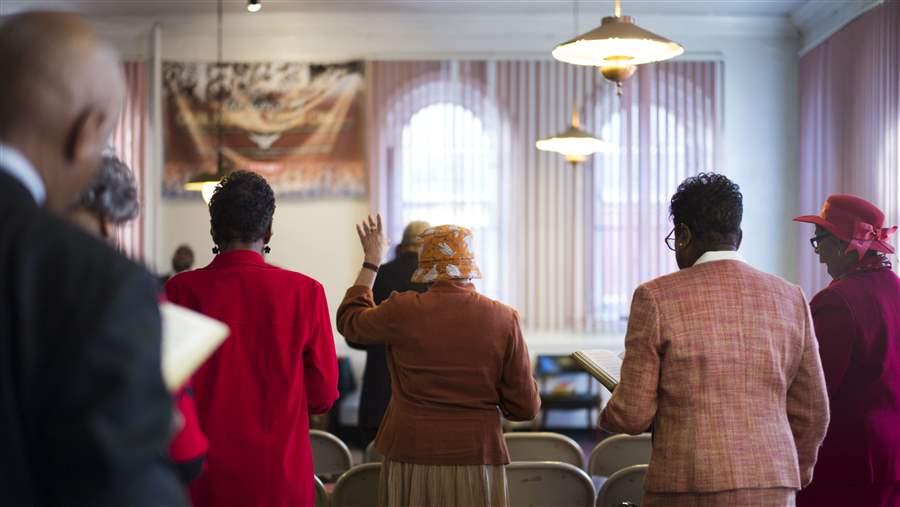 Congregants attend a service at Shiloh Baptist Church in Philadelphia’s Graduate Hospital neighborhood, which has changed dramatically in recent years.

Research from Pew’s report, “Philadelphia’s Historic Sacred Places: Their Past, Present, and Future,” examines factors of vulnerability and resilience that are likely to influence the futures of the city’s houses of worship that were built for religious purposes before 1965. The study found that:

The analysis did not seek to measure or quantify the extent to which neighborhood change makes sacred places more vulnerable. Interviews with church leaders, however, provided ample examples of congregations struggling to figure out how to thrive in gentrifying neighborhoods. Such changes can make it more difficult for them to attract new members, retain old ones, play active roles as neighborhood institutions, and even provide parking for members. Every story is a little different.

The Rev. Peter Grandell, pastor of Church of the Crucifixion, an Episcopal parish in the Bella Vista neighborhood, explained the situation his congregation faces. “Here is a minority parish with not a lot of money finding itself in the midst of a quickly gentrifying, economically moving, quickly upper-middle-class situation,” he said. “How do you [attract new members] when you don’t have the fancy music program, and you don’t have all of the bells and whistles?”

Historic sacred places in such areas sometimes are sold to developers looking for properties to overhaul. From the point of view of the community, if not the congregation, that can be good or bad, depending on a number of factors, including how the building will be used, how long the property sits vacant, and whether the building is torn down.

One gentrifying neighborhood where the pressure on historic sacred spaces has been intense is the Graduate Hospital area, also known as Southwest Center City.1

Since 2011, five predominantly African-American congregations that occupied historic sacred spaces have left the area, a former working-class black neighborhood that has become increasingly white and higher-income in recent years. Three of the small buildings were demolished; Greater St. Matthew Baptist was turned into condominiums; and First Colored Wesley Methodist Church is moving its congregation from 17th and Fitzwater streets, its home since 1943, to East Oak Lane in the northwest part of the city. In addition, New Light Beulah Baptist Church, a block away at 17th and Bainbridge streets, was knocked down in 2017 to make way for five homes.2

First Colored Wesley Methodist sold its property for $1.6 million to a lawyer who plans residential development. Inga Saffron of The Philadelphia Inquirer explained the move this way: “[T]he web of neighborhood connections that gave Wesley its reason for being in this part of South Philadelphia is rapidly disappearing. In a sense, the neighborhood left Wesley.”3 Similarly, churches in Fishtown, Pennsport, and other neighborhoods with rising real estate values have been redeveloped or demolished.

Decisions by congregations to leave gentrifying areas—or consider doing so—are not just motivated by the allure of developers’ money to purchase a church. There’s also the increased cost to those church members who live in the neighborhood, which creates the incentive for them to move out. Churches do not pay real estate taxes, but homeowners do.

“The values of the properties have a lot of homeowners, especially long-term homeowners, scared because of the [rising] tax assessments,” said the Rev. Edward Sparkman of Shiloh Baptist Church. “They’re worried about what they’re going to have to pay in taxes.”

Larry Eichel is director of Pew’s Philadelphia research initiative and edited the report “Philadelphia’s Historic Sacred Places: Their Past, Present, and Future." Writer Tom Infield drafted the study based on research performed for Pew by PennPraxis of the University of Pennsylvania’s School of Design with assistance from Partners for Sacred Places.