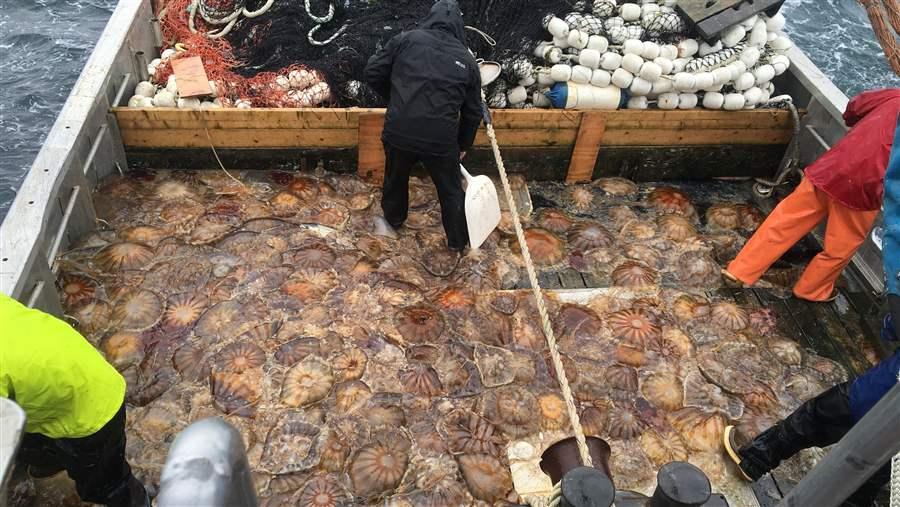 Salmon fishermen in western Alaska were forced to shut down for the day upon finding their net full of these Chrysaora melanaster jellyfish. Although this species sometimes amasses in large blooms, the event may signal an environmental shift—something an emerging citizen-science network could help determine.

Interested in recording and discussing changes in your environment with scientists and experts? There’s an app for that. The LEO Network—which stands for Local Environmental Observer—is an online community that connects citizens with technical experts to identify and document signs of environmental change.

This digital platform allows network members, coordinators, and collaborators to build media-rich postings, including photos, videos, and linkages to data, literature, and other resources. Topics can encompass any aspect of the environment such as plants, insects, fish, marine life, terrestrial species, unusual weather patterns, and more.

Tom Okey, a Pew marine fellow and regional coordinator for one of the network’s hubs in Victoria, British Columbia, Canada, says that local knowledge submitted through the LEO Network could provide valuable data on environmental change that more traditional systems are not detecting or recording. As a hub coordinator, Okey reviews observations, invites topic experts to contribute, and edits and facilitates approved postings of unusual environmental changes. He is developing a global LEO Oceans initiative, which will focus on marine issues and will help him fulfill his fellowship’s goal of studying the effects of climate change on marine ecosystems.

In Sand Point, Alaska, for example, a salmon fisherman posted an observation of jellyfish abundances beyond anything he had seen in his lifetime—so many that they forced him and his team to shut down fishing. The local LEO coordinator in the area and two experts added information to this post. One of them, Kristin Cieciel, who is on the Marine Research Institute staff at Auke Bay Laboratories in Juneau, noted that this jellyfish species, Chrysaora melanaster, can amass in groups that are “quite thick or abundant.” Future posts about this event may help identify any patterns that emerge.

The LEO Network has roots in indigenous Alaskan communities, where scientists were looking for a way to capture observations from locals and communities with expert knowledge about their areas. Scientists and citizens, including youth and members of indigenous communities across Canada, Mexico, and the United States, have begun to participate.

The network has around 1,700 active users and continues to expand. Users have submitted posts on almost 800 natural occurrences since LEO launched in 2012. Although most observations are coming from North America, some are starting to trickle in from Africa, Australia, and Europe.

Experts and technical advisers in the user hubs of Victoria; Yellowknife, in Canada’s Northwest Territories; and Ensenada, in Baja California, Mexico; host training sessions and workshops with registered network members to help them identify scientifically important changes specific to those regions.

Anyone with an interest in citizen science or global change, or in simply following the changes tracked on the platform’s interactive map, can join the LEO Network. The platform is supported by the Commission for Environmental Cooperation, an intergovernmental organization, and the U.S. Environmental Protection Agency, among others.