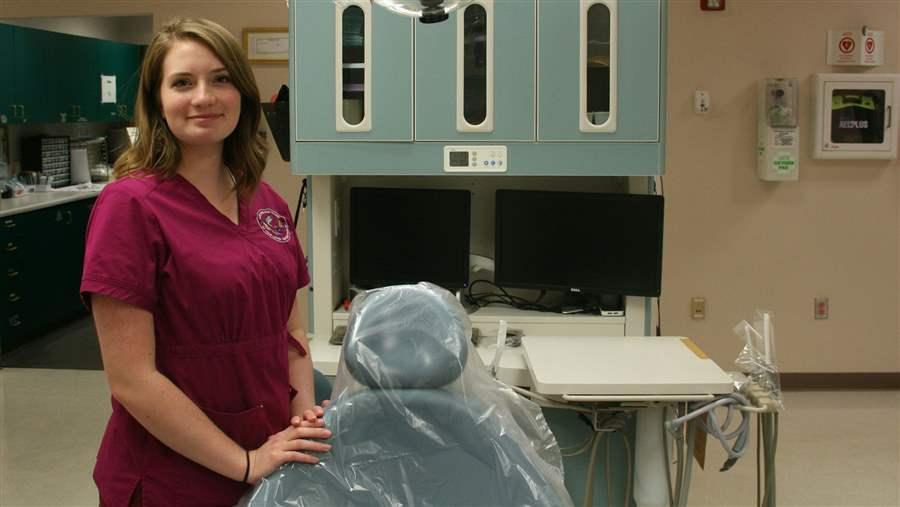 Naomi Petrie has been hired as the first dental therapist to practice in tribal communities in Oregon.

A 2011 state law authorized innovative and data-driven improvements to the state’s oral health system through dental pilot projects. CTCLUSI received approval from the Oregon Health Authority in 2016 to hire a dental therapist under this law. Petrie is the first dental therapist in Oregon to be a part of the tribes’ midlevel provider pilot.

Dental therapists have a relatively narrow scope of practice. They receive rigorous training but on a much smaller number of procedures—about 50 instead of the more than 500 that are in a dentist’s scope. They also operate under general supervision of a dentist. Research shows that midlevel providers can help dental clinics treat more patients, are cost-effective, and, as in this instance, provide culturally competent care.

The pilot aims to not only increase access to much-needed care, but also to create jobs in the tribal community, expanding the economic benefit to clinics and patients. Additionally, the Coquille Indian Tribe and the Native American Rehabilitation Association intend to hire dental therapists who are in training as part of the pilot. Modeled after the successful program in Alaska Native tribes, CTCLUSI is providing training and the ability to hire local practitioners to support the communities’ dentists.

As states like Alaska demonstrate the value of allowing dentists to hire dental therapists, more states are considering using them to increase access to care, especially with vulnerable groups. Therapists have also been authorized to practice in Minnesota, Vermont, Maine, and tribal communities in Washington state. A dozen other states are contemplating legislation to allow them to practice.

CTCLUSI is one of three sites partnering with the Northwest Portland Area Indian Health Board in the tribal dental health aide therapist pilot. The first pilot was approved by the state in February 2016.

States Expand the Use of Dental Therapy

Dental therapists—midlevel providers similar to physician assistants in medicine—deliver preventive and routine restorative care, such as filling cavities, placing temporary crowns, and extracting badly diseased or loose teeth. As states grapple with provider shortages, especially to serve vulnerable populations, a handful have acted to allow dentists to hire these practitioners, and many others are exploring the option. Dental therapists also practice in several tribal communities, where access to care can be especially limited.