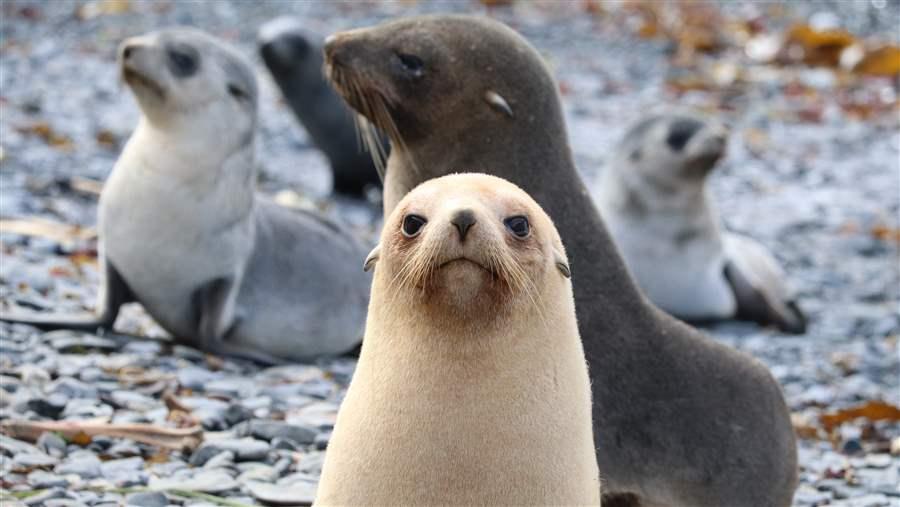 Antarctic fur seals, which were nearly wiped out by hunting on South Georgia Island in the late 19th and early 20th centuries, are making a comeback. About 1 in 1,000, like the pup in the foreground, is pale blond.

This is the second of three blog posts from the author’s expedition to South Georgia and the South Sandwich Islands. Read the first post here.

In 1788, some 13 years after British explorer Capt. James Cook landed on South Georgia Island in the South Atlantic Ocean, the first sealer arrived. By 1825 an estimated 1.2 million fur seals had been killed for their pelts, and by 1912 the fur sealing industry had come to an end, with the species almost wiped out on South Georgia.

Just before that end, the whaling industry was taking off in the area. In 1904 C.A. Larsen, a Norwegian, set up the first Antarctic whaling station on the island at Grytviken with 60 men. Additional stations were established at Ocean Harbour, Husvik, Stromness, Leith Harbour, and Prince Olav Harbour. Whales were plentiful, and demand for their oil was high. Products made from whales included oil for lighting, margarine, soap, fertilizer, and food supplements for farm animals. Coincidentally, many similar products are made today from krill, a tiny crustacean that underpins the Southern Ocean food web. 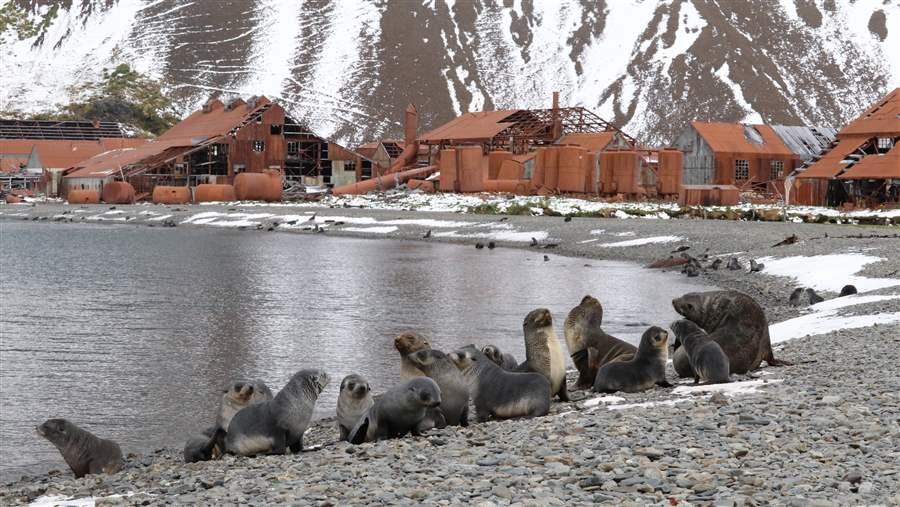 Fur seals on the beach near the ruins of the Stromness Whaling Station.

While whaling in South Georgia’s waters was initially extremely profitable, its unsustainability was apparent from the outset. In 1906 the governor of the Falkland Islands, which by then managed industry on South Georgia, introduced a licensing system intended to manage the resource—for example, by forbidding the killing of females with calves.

The introduction of the pelagic factory ship, however, which allowed whalers to operate on the high seas, ultimately signalled the end of the industry. The catch skyrocketed, leading to an overproduction of oil and a crash in its price, which ultimately forced two of South Georgia’s whaling stations to close. But whaling continued on South Georgia until 1965, when too few whales were left for the industry to make a profit. From the landing of the first whale in Grytviken in 1904 to the last in 1965, South Georgia whaling stations processed 175,250 of the majestic cetaceans.

South Georgia’s five whaling stations have fallen into disrepair, and due to deteriorated structures, asbestos, and fuel oil, entry to four of them is prohibited. They stand as rusting relics of a dead industry—surrounded by a 200-meter exclusion zone and plundered of much of their heritage by decades of memento-seeking visitors. The exception is Grytviken, which is an eerie memorial to this brutal industry. The clean-up of the site, done for the safety of tourists, has left a stripped-back, sanitized version of the station, but the scale and efficiency of the bygone operation remain apparent. The workers at Grytviken could process up to 25 fin whales, each about 18 metres (60 feet) long, in 24 hours. Huge rusting vats still drip whale oil, and a wooden pole driven in the ground shows the size of the largest blue whale ever recorded, which was processed on the site and measured 112 feet and weighed more than 100 tons. 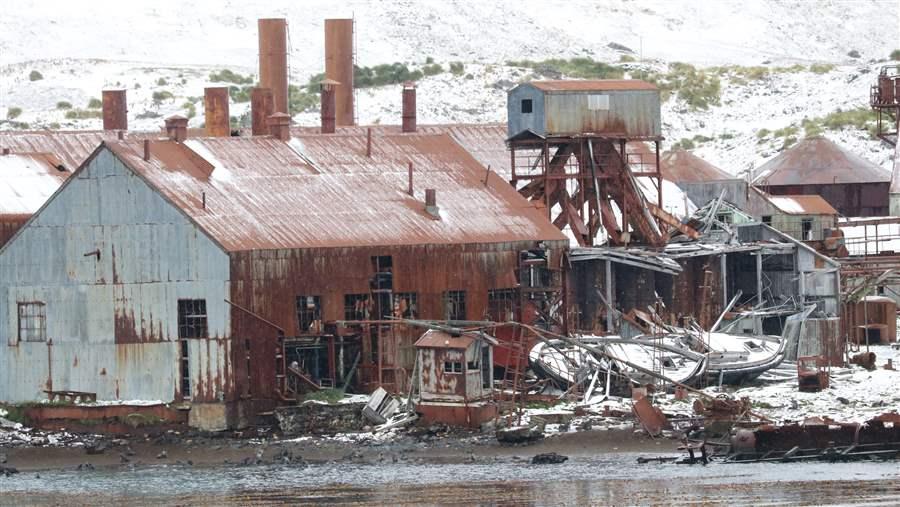 Dilapidated buildings at Stromness Whaling Station— described by some as a museum of asbestos.

Over 1,000 workers were employed at the stations and on ships operating at South Georgia during the height of the industry. The stations ran 24 hours a day, seven days a week, in two shifts, but life wasn’t all about work; most facilities had a cinema, and Grytviken even had a ski jump and a church, which has recently been renovated. 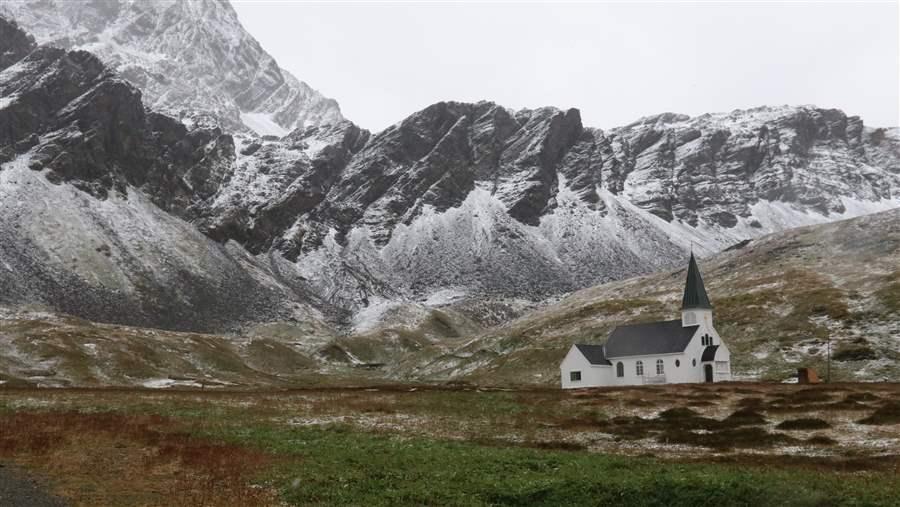 The church in Grytviken. 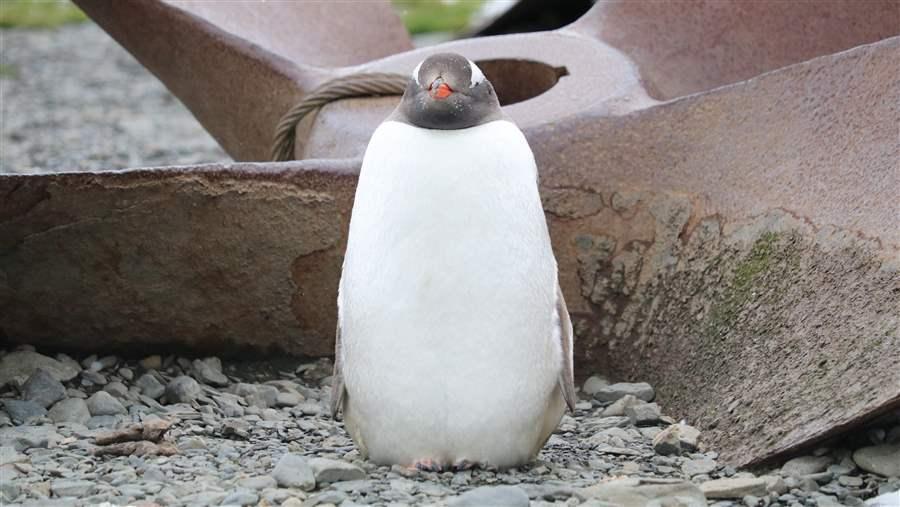 A gentoo penguin sits next to the propeller of an old whaling vessel.

Today the whaling station is guarded by fur seals and elephant seals, which loiter around the small pathways to and from the site, nipping and snorting at those who approach. 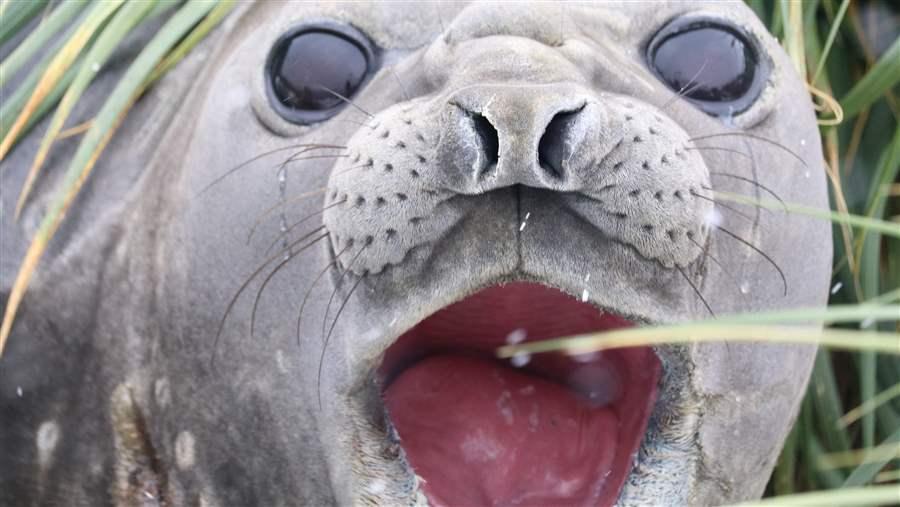 A female elephant seal warns a tourist to keep his distance.

A few hundred metres beyond Grytviken, in a small cemetery, is the grave of the island’s most legendary inhabitant—British polar explorer Sir Ernest Shackleton. In December 1914, after sailing to South Georgia from England, Shackleton and a crew of 27 men set off from Grytviken on the 44-metre (144-foot) Endurance to attempt the first land crossing of Antarctica. He planned to march from the Weddell Sea to the Ross Sea via the South Pole.

Although he failed to complete that quest, the expedition produced one of the greatest achievements in polar exploration. After being trapped for months by pack ice in the Weddell Sea, Shackleton ultimately led his crew to Elephant Island in the South Shetland Islands, where it appeared that they all might starve. But Shackleton refused to give up, setting out for help with five companions on a 7-metre (23-foot) boat. After a 16-day, 1,300-kilometre (800-mile) crossing in stormy seas, the group reached the south coast of South Georgia, from where Shackleton and two of his men crossed the island on foot, reaching Stromness Whaling Station 10 days later.

A whaling vessel promptly headed for Elephant Island and rescued all of the remaining crew of the Endurance.

Today, the final section of Shackleton’s Route across South Georgia has become a pilgrimage for tourists and it is deemed fitting to toast Shackleton, The Boss, with a dram of whisky at his grave.

Coming next: Encounters with wildlife on South Georgia, and the threats jeopardizing the ecosystems’ recovery.….

Johnny Briggs is an officer with the Pew Bertarelli Ocean Legacy Project’s U.K. work, based in London.

An Ecosystem Makes a Tenuous Comeback

Even so, wildlife in South Georgia and the South Sandwich Islands faces a new threat

Remote, windswept, and inhospitable to humans, South Georgia and the South Sandwich Islands harbour biodiversity and a cultural history worthy of protection. Which is how I found myself aboard the U.K. Government&rsquo;s logistics and fishery patrol vessel Pharos SG in February, rolling over endless blue seas en route to these islands, which together are a U.K. sub-Antarctic territory.