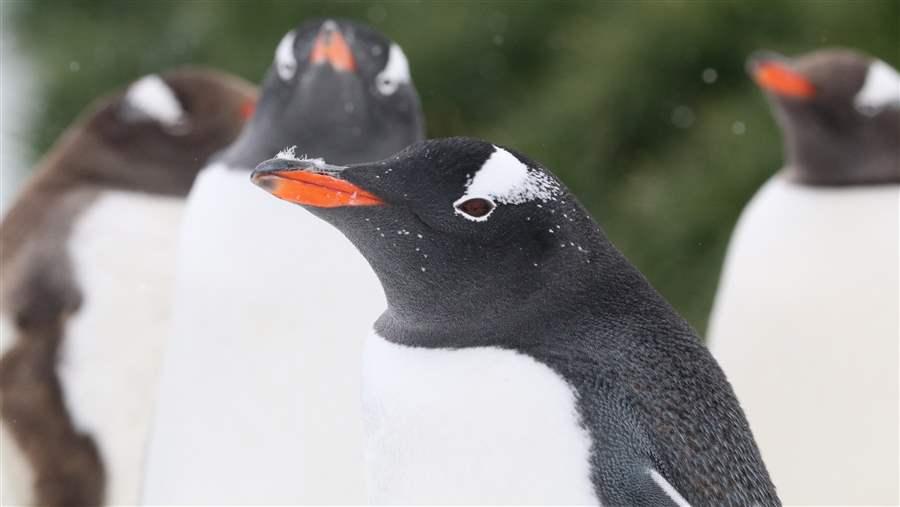 South Georgia Island is home to millions of penguins, including this gentoo, as well as fur seals.

Remote, windswept, and inhospitable to humans, South Georgia and the South Sandwich Islands harbour biodiversity and a cultural history worthy of protection. Which is how I found myself aboard the U.K. Government’s logistics and fishery patrol vessel Pharos SG in February, rolling over endless blue seas en route to these islands, which together are a U.K. sub-Antarctic territory. 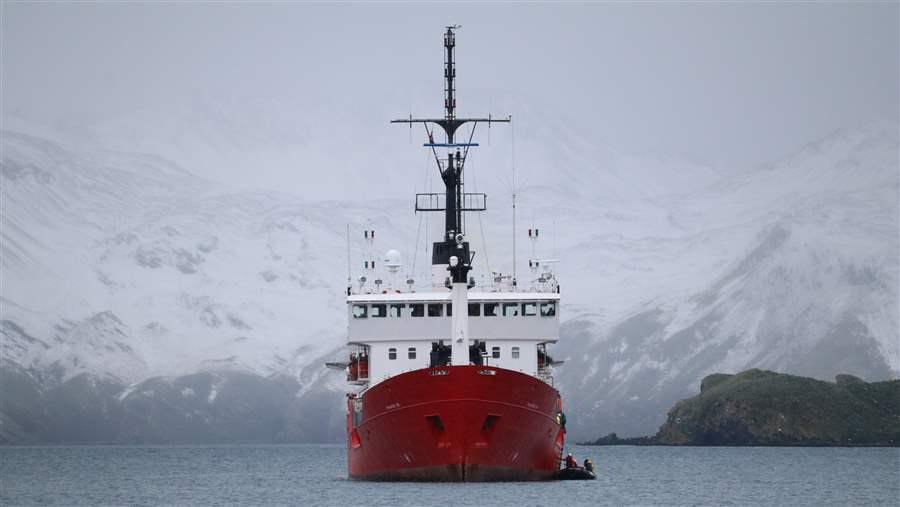 I was representing the Pew Bertarelli Ocean Legacy Project on a 12-day expedition to learn more about the cultural and natural history of the islands, information that could help with decisions on how to conserve these remarkable islets. Also on the expedition were representatives from the Royal Society for the Protection of Birds, WWF-UK, BBC, British Antarctic Survey, Australian and Norwegian Governments, the U.K. Foreign & Commonwealth Office, and the Government of South Georgia—including its Commissioner. 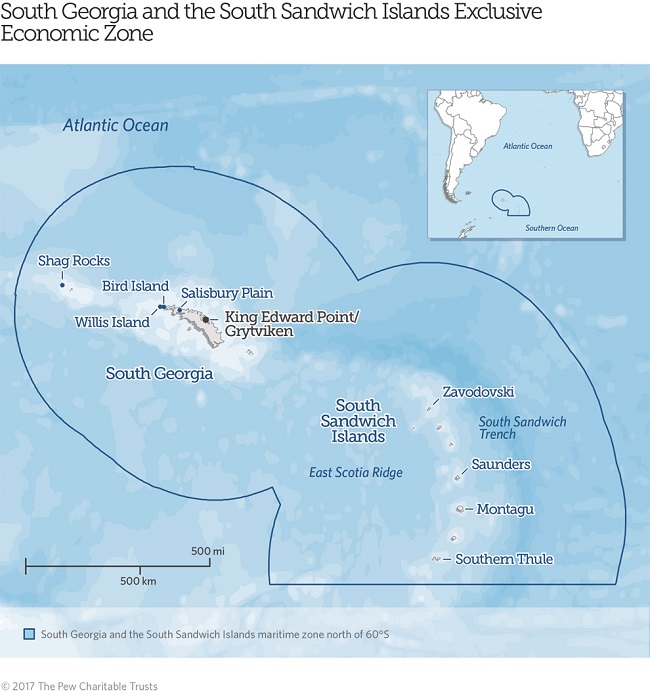 The islands, in the South Atlantic Ocean east of Drake’s Passage between Antarctica and Argentina, are home to a shocking number of penguins and one of the world’s most abundant and diverse seabird communities. In its heyday in the 1800s and early 1900s, the area was a major seal-hunting and whaling centre, but aggressive hunting depleted both populations, shutting down the fur trade in 1912 and whaling operations in 1965.

Today the whales are coming back, and we spotted a few humpbacks during the 1,300-kilometre (800-mile) journey from the Falkland Islands. On the open ocean, we saw little other wildlife, save for the occasional black-browed or wandering albatross.

But on our third day at sea, the ocean began to bubble with wildlife, building up to a consistent spectacle of fur seals and king, macaroni, and gentoo penguins. Staring into the blue waters became addictive. 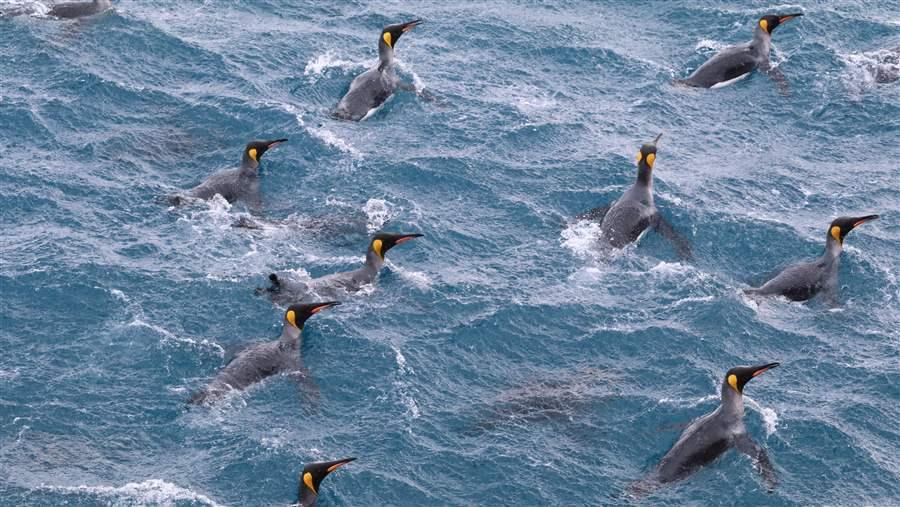 As we approached our first port of call, King Edward Point (KEP) on the east coast of South Georgia, I was struck by the steep, mountainous, and barren landscape: Looking toward shore, I saw no trees or shrubs, only seals and penguins. The King Edward Point Research Station, owned by the islands’ Government and operated by the British Antarctic Survey (BAS), has the only group of buildings on the island, which includes accommodations, labs, and a jail. The government officials, BAS staff, and visiting scientists working here manage the South Georgia fishing and tourism sectors, and support critical scientific research for ecosystem management. 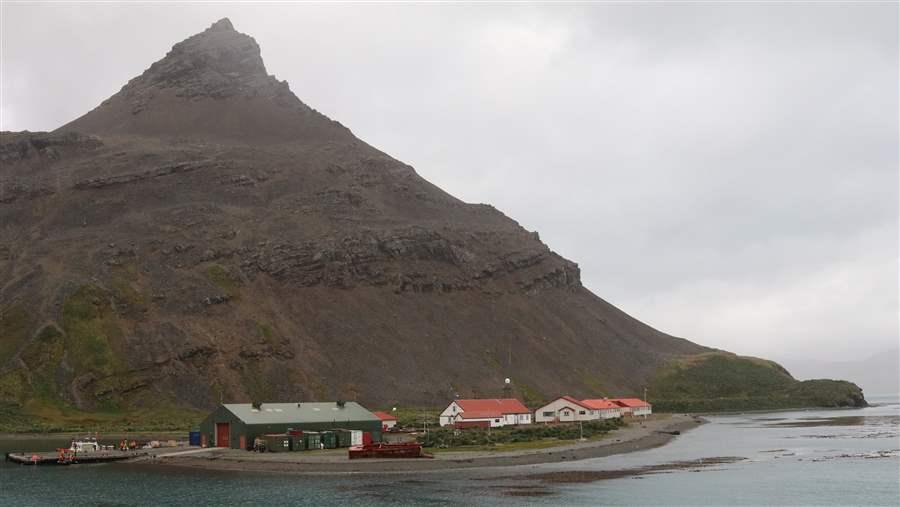 King Edward Point, the “capital” of South Georgia and the Sandwich Islands, has a summer population of approximately 20.

These islands were first sighted in 1675, when a merchant ship was blown far off course while rounding Cape Horn on the southern tip of Chile. The first landing here occurred a century later, when British explorer Captain James Cook, on his second voyage around the world, took possession of South Georgia in the name of King George III. 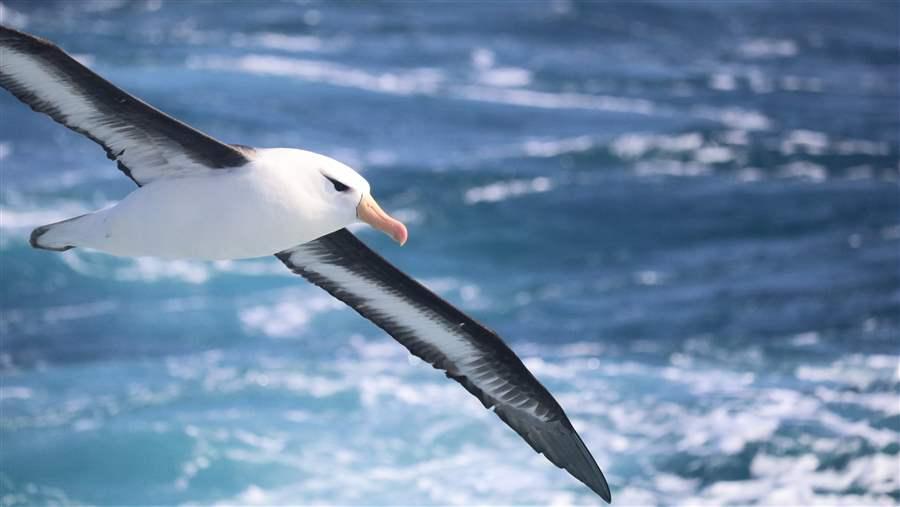 The black-browed albatross, circling our vessel, is one of the species that comprises the over 30 million breeding pairs that frequent South Georgia.

Soon after came the sealers and, another 100 years on, the whalers, some of whom had the honour to meet one of the world’s most famous explorers, Ernest Shackleton. After his epic exploration-turned-survival tale aboard the Endurance off Antarctica, Shackleton piloted a 7-meter (23-foot) boat 2,100 kilometres (1,300 miles), eventually coming ashore on South Georgia in 1916. Then, he still had to cross the island on foot to reach the Stromness Whaling Station, which sent a vessel to rescue Shackleton’s stranded crew. Ultimately, all 28 members of the party were saved. Shackleton died a hero on South Georgia in 1922 and was buried after a service at Whalers Church. Today, the final section of Shackleton’s route has become a pilgrimage for many of the 8,000 tourists who visit these islands annually.

Signs of hope for the environment

Whether they know it or not, those visitors are also witnessing an ecosystem in an advanced stage of recovery. It is estimated that the sealing industry decimated South Georgia’s Antarctic fur seal population to less than 100 animals, yet today the fur seals of South Georgia are the densest aggregation of marine mammals on Earth, totalling over 4 million. Whales are returning in significant numbers, and some bird and plant species have benefited from programmes to eradicate invasive reindeer and rats.

Despite these promising signs, the ecosystem faces increasing threats from climate change: Glaciers are retreating at a rate of up to 1 meter (3.3 feet) per day, and water temperatures and acidity levels in the Southern Ocean are increasing at the highest rate on the planet, imperilling numerous species.

The Government of South Georgia and the South Sandwich Islands is implementing precautionary measures to protect the area’s remarkable biodiversity. In my next few blog posts, I will explore those measures, dive deeper into these islands’ history, and wade into throngs of penguins. Stay tuned!

Johnny Briggs is an officer with the Pew Bertarelli Ocean Legacy Project’s U.K. work, based in London.