Notes: These data have been updated. To see the most recent data and analysis, visit Fiscal 50.

On October 26, 2017, this analysis was revised to reflect corrected data for Pennsylvania. From fiscal  years 2002 to 2015, revenue fell short of expenses in 10 states.

Even as they dealt with two recessions, most states amassed sufficient revenue between fiscal years 2002 and 2015 to cover their expenses. But total revenue in 10 states fell short, jeopardizing their long-term fiscal flexibility and pushing off to future taxpayers some past costs for operating government and providing services.

A look beyond states’ budgets at a fuller accounting of their financial activities shows that New Jersey has accumulated the largest gap between its revenue and annual bills. Between fiscal 2002 and 2015, it took in enough to cover just 92.4 percent of its expenses—the smallest percentage of any state. Meanwhile, Alaska collected 137.5 percent, yielding the largest surplus.

The typical state’s revenue, composed primarily of taxes and federal grants, totaled 102 percent of its annual bills over the 14 years for which data were available.

Although most states collected more than enough aggregate revenue to cover aggregate expenses, the 10 states that had a deficit—or a negative fiscal balance—carried forward deferred costs of past services, including debt and unfunded public employee retirement liabilities, which could constrain their future fiscal options. 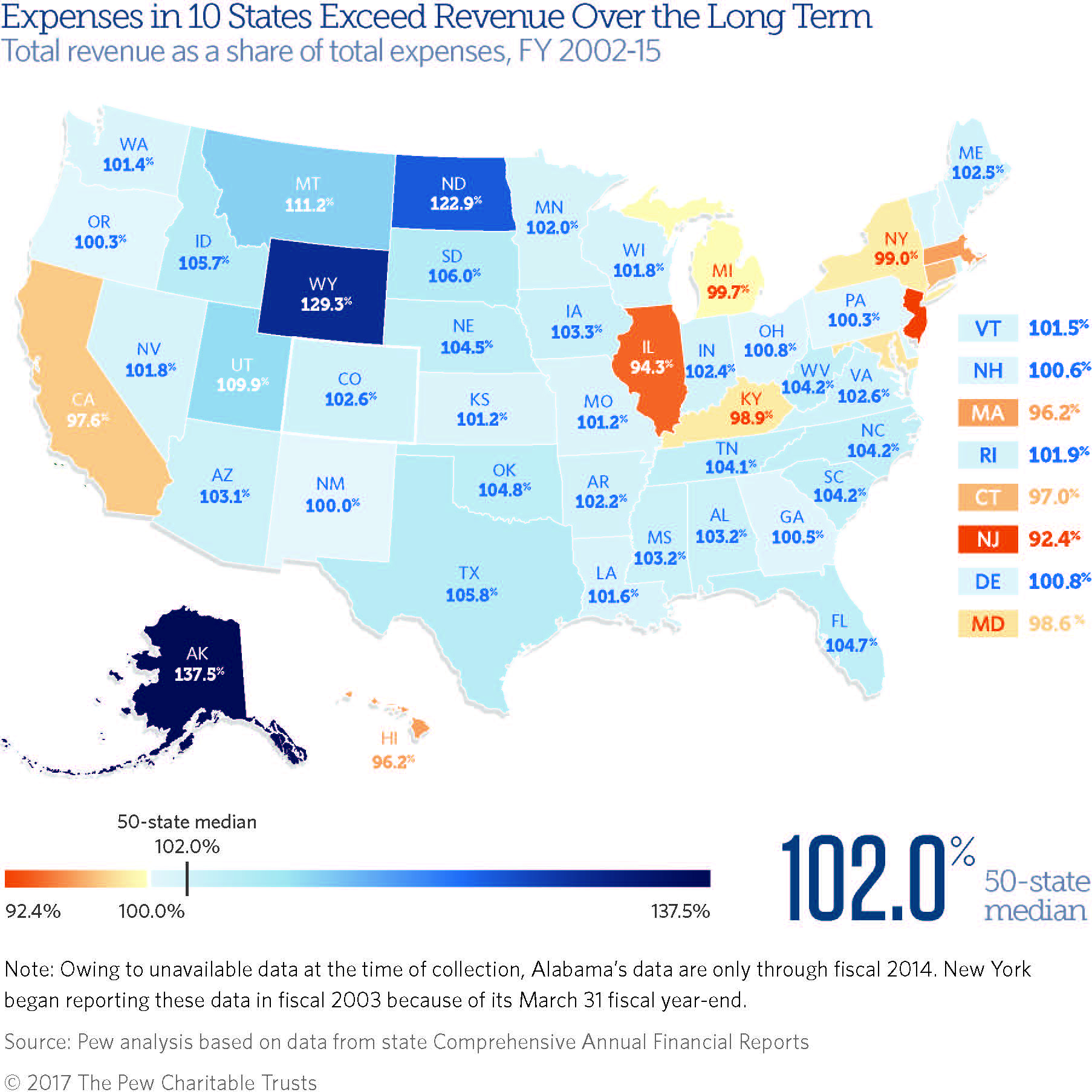 This fuller picture of states’ financial activities—capturing all but those for legally separate auxiliary organizations, such as economic development authorities or some universities—is drawn from their audited Comprehensive Annual Financial Reports (CAFRs). These reports attribute revenue to the year it is earned, regardless of when it is received, and expenses to the year incurred, even if some bills are deferred or left partially unpaid. This system of “accrual accounting” offers a different perspective of state finances than budgets, which generally track cash as it is received and paid out. Accrual accounting captures deficits that can be papered over in the state budget process, even when balance requirements are met, such as by accelerating certain tax collections or postponing payments to balance the books. This analysis begins with data for fiscal 2002 because it was the first year that accounting standards required states to report accrual information for the entire government.

Zooming out from a narrow focus on annual or biennial budgets offers a big-picture look at whether state governments have lived within their means, or whether higher revenue or lower expenses may be necessary to bring a state into fiscal balance.

Accounting for funds as the financial reports do is like a family reconciling whether it earned enough income over 12 months not just to cover costs paid with cash but also to pay off credit card bills and stay current on car or home loan repayments, rather than pushing some charges off to the future.

A state whose annual income falls short generally turns to a mix of reserves, debt, and deferred payments on its obligations to get by. Conversely, when a state’s annual income surpasses expenses, the surplus can be directed toward nonrecurring purposes, including paying down obligations or bolstering reserves—or new or expanded services that create recurring bills.

Like families, states can withstand periodic deficits without endangering their fiscal health over the long run. In fact, all but one state (Montana) that amassed surplus revenue between fiscal 2002 and 2015 had one or more years in the red. But chronic shortfalls—as with New Jersey and Illinois each year since at least fiscal 2002—are one indication of a more serious structural deficit in which revenue will continue to fall short of spending absent policy changes. Without offsetting surpluses, long-running imbalances can create an unsustainable fiscal situation.

Comparing states’ revenue and expenses, in aggregate and year-by-year totals from fiscal 2002-15, shows:

Changes in the economy can move a state’s annual revenue and expenses out of balance, as can policy decisions such as tax or spending changes.

Shortfalls mainly occurred during and immediately after the economic downturns of 2001 and 2007-09, suggesting that most states’ challenges were temporary. (See the “State trends” tab.) For example, all but Louisiana, Montana, North Dakota, and West Virginia ran deficits in fiscal 2009, the nadir of the Great Recession.

As the nation’s economic recovery took hold, a majority of states balanced their books and have kept them in the black since fiscal 2011. In fiscal 2015, all but seven states had surpluses: Alaska, Illinois, Kansas, Louisiana, Massachusetts, New Jersey, and Oregon. Alaska had its deepest shortfall since the end of the recession in fiscal 2015 as global oil prices pushed annual revenue down to just 69.2 percent of expenses.

Among the 10 states with gaps between aggregate revenue and expenses in fiscal 2002-15, a year-by-year breakdown shows that some have recently turned a corner and begun reporting surpluses. Michigan has produced a surplus for the past five fiscal years, and California for the past three. Connecticut, Hawaii, Kentucky, Maryland, and New York each reported revenue greater than expenses for fiscal 2015.

CAFRs broaden the scope of financial reporting beyond state budgets to capture all funds under control of the state government, including revenue and spending from related units, such as utilities and state lotteries. This produces a more comparable set of state-to-state data. All primary government operations were included in this analysis. In a number of states, “component units” such as economic development authorities or public universities were excluded when states classified them separately.

Although all states file audited and nationally standardized financial reports, they are mostly used by credit rating agencies and other public finance analysts while most state finance discussions center on budgets.

Examining aggregate revenue as a share of aggregate expenses—that is, all revenue and all expenses from fiscal 2002 to 2015, each adjusted for inflation to give each year equal weighting—provides a long-term perspective that transcends temporary ups and downs. This approach allows surplus funds collected in flush years to balance out shortfalls in others.

Importantly, just because a state raised enough revenue over time to cover total expenses does not necessarily mean that it paid each bill. For example, North Dakota brought in surpluses nearly each year but fell behind on annual contributions to its pension system, electing to use the money for other purposes. So this measure gauges states’ wherewithal but does not reconcile whether revenue was used to cover specific expenses. Collecting more revenue than expenses over the long term is a necessary but insufficient condition of fiscal balance. Further insights can be gleaned from examining states’ debt and long-term obligations.

A negative fiscal balance can be one indication of a structural deficit in a state, but there is no consensus on how to measure a circumstance in which revenue will continue to fall short of spending absent policy changes. Some states, for example, diagnose the existence of a structural deficit by comparing cash-based recurring general fund revenue to recurring expenditures under normal economic conditions. However, such data are not available on a 50-state basis.

Download the data to see individual states’ inflation-adjusted revenue and expenses for each fiscal year from 2002 to 2015. Visit Pew’s interactive resource Fiscal 50: State Trends and Analysis to sort and analyze data for other indicators of state fiscal health.