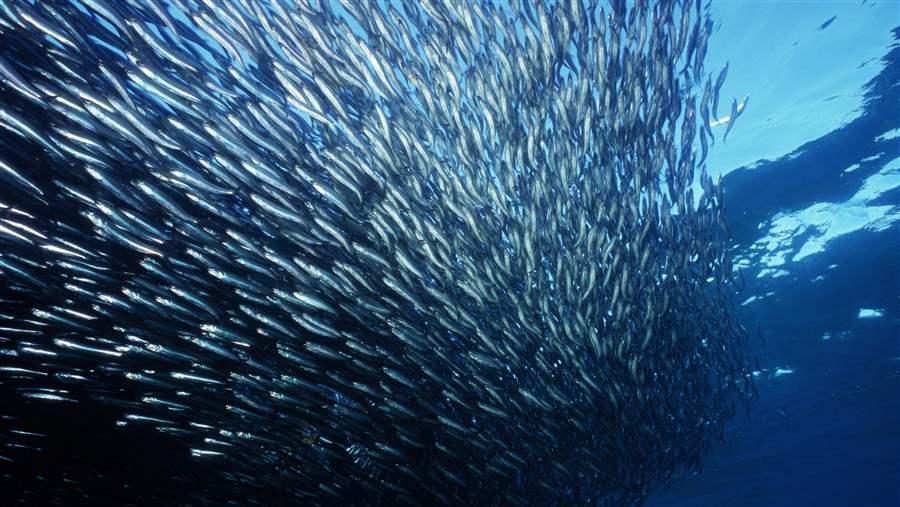 Northern anchovies, like these, could gain improved oversight from West Coast fishery managers, who meet this week to discuss policy.

Off the coast of California, one of the most important fish in the sea is in trouble. Northern anchovy, among the small species known as forage fish, has decreased dramatically in number, which could have repercussions throughout the Pacific Ocean’s food web.

Anchovies are vital prey for more than 50 species, including seabirds, larger fish such as salmon and tuna, and such marine mammals as whales and sea lions. Along with other forage fish, like sardines, Pacific saury, and sand lance, anchovies are an essential part of one of the most vibrant marine ecosystems in the world. This week, West Coast fishery managers are meeting to consider a range of issues, including measures that could lead to improved management of anchovies.

Recent studies indicate that the northern anchovy’s central subpopulation—which occupies the Pacific off California—is at very low levels. While the drastic drop is probably the result of environmental factors such as fluctuating ocean temperatures, the need to safeguard northern anchovies is crystal clear. Here are five reasons to protect this critical species.

1. Northern anchovies are the most important forage fish in the U.S. Pacific Ocean. 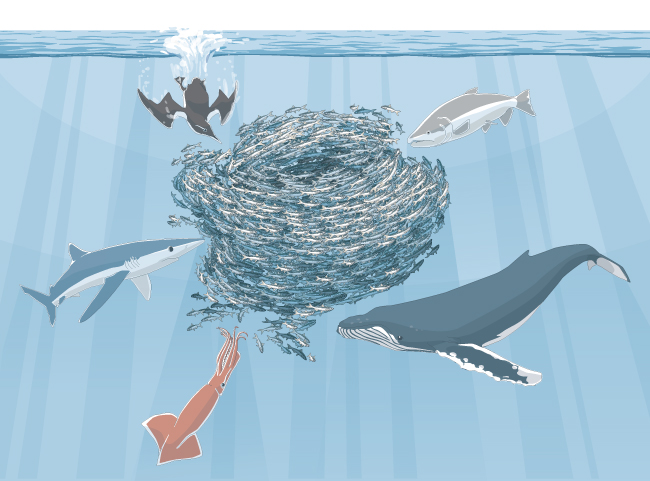 Northern anchovies are a vital source of food for a vast array of marine wildlife off the West Coast.

According to scientific data, northern anchovy is the preferred prey species for seabirds throughout the California Current ecosystem, the coastal waters stretching from British Columbia in Canada to Baja California in Mexico. It is also the top or second choice for the broader array of marine predators off the Pacific coast, such as humpback whales, chinook salmon, dolphins, and sea lions.

2. Northern anchovies are the meal of choice for rhinoceros auklet chicks.

Biologists with the research group Oikonos at Año Nuevo Island off California have found that, in some years, anchovies comprise up to 100 percent of the diet of Pacific coast rhinoceros auklet seabird chicks. Similarly, research conducted 50 miles north, at the Farallon Islands National Wildlife Refuge, suggests that seabirds there can consume over 90,000 tons of anchovies a year when the forage species is readily available. That’s why scientists say we should leave a third of the forage fish for the birds. 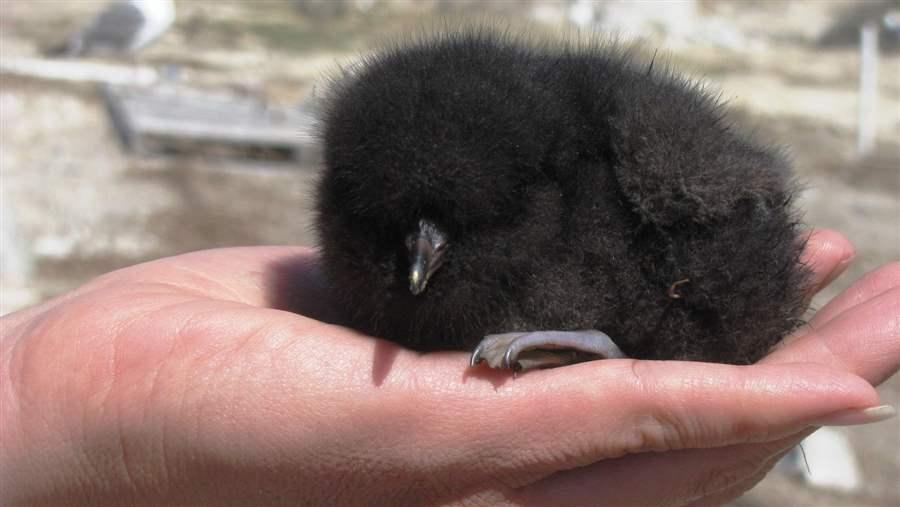 Rhinoceros auklet chicks, like this one from a colony on Año Nuevo Island, are especially partial to anchovies.

3. Anchovies, like other forage fish, find safety in numbers.

Because anchovies are small—adults reach about 8 inches in length—these fish, like other forage species, move through the ocean in massive schools known as bait balls to protect themselves from predators. But this also makes forage fish an easy target for commercial fishing vessels. Precautionary fishing limits could help protect northern anchovies while they rebound from their low numbers. 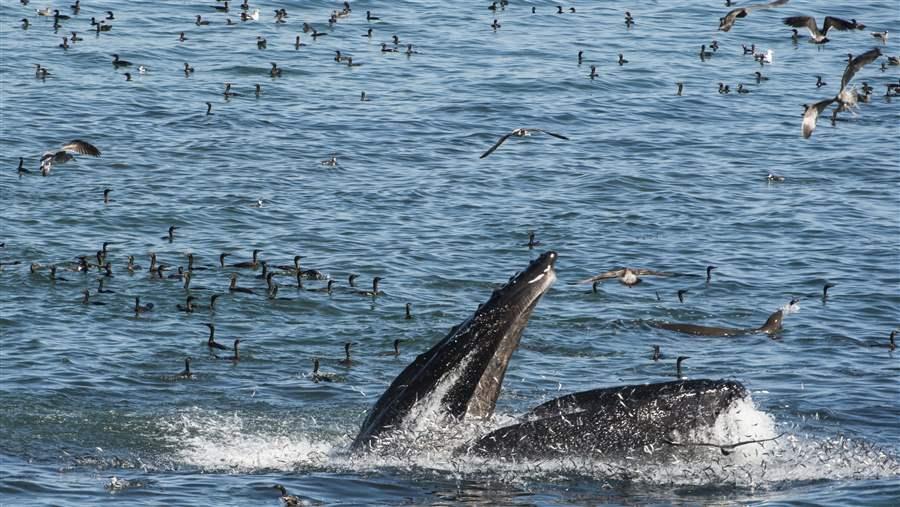 As humpback whales break the ocean’s surface, they create a “bubble blast,” which gives them a mouthful of forage fish, including anchovies.

To feed on anchovies and other forage fish, humpbacks use a technique called a “bubble blast” in which they blow enormous underwater bubbles to herd their prey, then lunge upward through the resulting bait ball, mouths wide open. To complete a cycle of this lunge-feeding, the whales strain the enormous mouthfuls through their baleen plates, which lets the water out while keeping the fish in.

Even though the central subpopulation of the northern anchovy is at a near-historic low, the Pacific Fishery Management Council hasn’t adjusted commercial catch limits for the species since the 1990s, when the population was much bigger. While these recent declines in anchovy abundance may be part of the natural boom-and-bust cycles that affect all forage fish, failing to reduce catch limits during a population downturn can exacerbate declines by lengthening the amount of time before the population begins to rebound.

That’s why The Pew Charitable Trusts and many others are asking the council to adopt an ecosystem-based approach to anchovy management to ensure adequate food for dependent predators, prevent overfishing, and support strong coastal communities.

As marine biologist and explorer Sylvia Earle wrote recently in National Geographic, “A healthy ocean depends on an abundant and diverse array of small organisms, including forage fish. If fishery managers fail to recognize and act upon those facts, we may soon think of our ocean not as a vast, blue, vibrant wonder, but as one big regret.”

Take action: Please take a moment to contact the Pacific Fishery Management Council. After all, these little fish are a big deal!