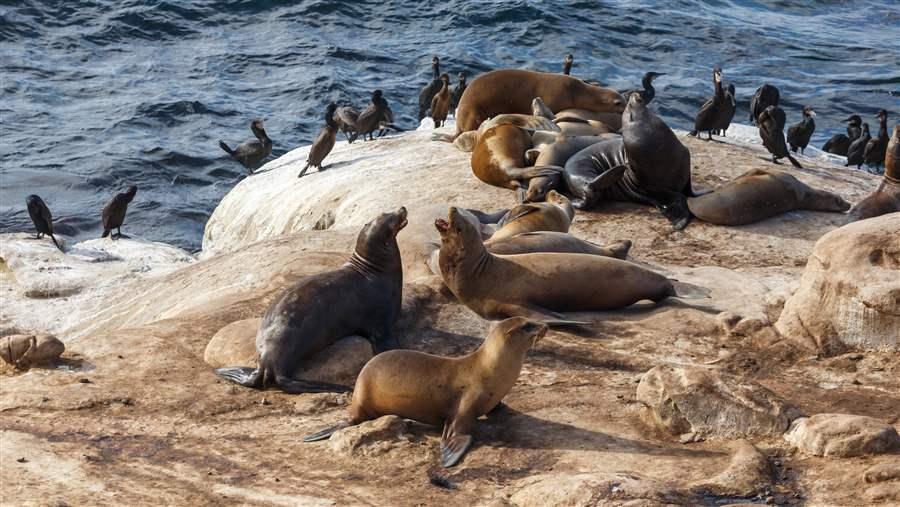 The food web breaks down without the critical links between predators, such as these sea lions and Brandt’s cormorants, and prey, says Julie Thayer, “so we are concerned about the health of all of their populations.”

This Q&A was updated on March 7, 2017 at the request of Julie Thayer to clarify certain details, including changing maximum capacity to maximum observed biomass.

A recent research project funded by The Pew Charitable Trusts has found that productivity—the rate of reproduction—of marine predators declines sharply when their supply of prey, such as forage fish, drops below about a quarter to one-third of maximum observed biomass, that is the total weight or volume of a species. Previously, researchers had suggested maintaining prey populations at a third to sustain populations of seabirds. This new research shows that this one-third threshold also applies to other marine vertebrates and could serve as a guide for managing forage fisheries around the globe.

The study, led by Julie Thayer, looked at seabirds, marine mammals, predatory fish, and a variety of prey groups in the California Current of the Pacific Ocean off of central and Southern California.

I recently talked with Thayer to learn more about her work.

Q: Specifically, what did your recent study reveal?

A: We found that no matter which species we examined or in what region, predators in the southern and central California Current required between one-fourth and one-third of the maximum long-term prey population to maintain their productivity. Predator populations change in response to prey availability, but not always right away. Predators at the top of the food web also have many survival strategies, so it takes a severe prey shortage to kill adults, although we’ve seen instances of this in recent years. The populations of predators that we’re dealing with often show changes only after about three to eight years, depending on the maturation time of species—that is, the time it takes for surviving offspring to enter the breeding population or for lack of juvenile survival to cause a population crash. We measured predator productivity rather than population in our study because it is much more sensitive to even small changes in prey and can provide real-time information.

Q: Which species did you look at?

A: We investigated four prey species: northern anchovy, Pacific sardine, market squid, and juvenile rockfish, which sit in the California Current food web and are commercially important. We also examined the responses of predators that rely largely or exclusively on these prey. We included many seabird predators because they had the most data available, including endangered least tern, common murre, rhinoceros auklet, Brandt’s cormorant, pigeon guillemot, and pelagic cormorant. We also included the previously endangered brown pelican, although pelicans have not bred successfully in this region since being removed from the endangered species list in 2009. For marine mammals, the most data were available for California sea lions at several breeding colonies in Southern California, and for predatory fish we focused on the Sacramento River fall-run population of chinook salmon. We needed more than 15 years of data to establish these predator-prey relationships, so we were limited to species that had been studied for at least that long in the region. 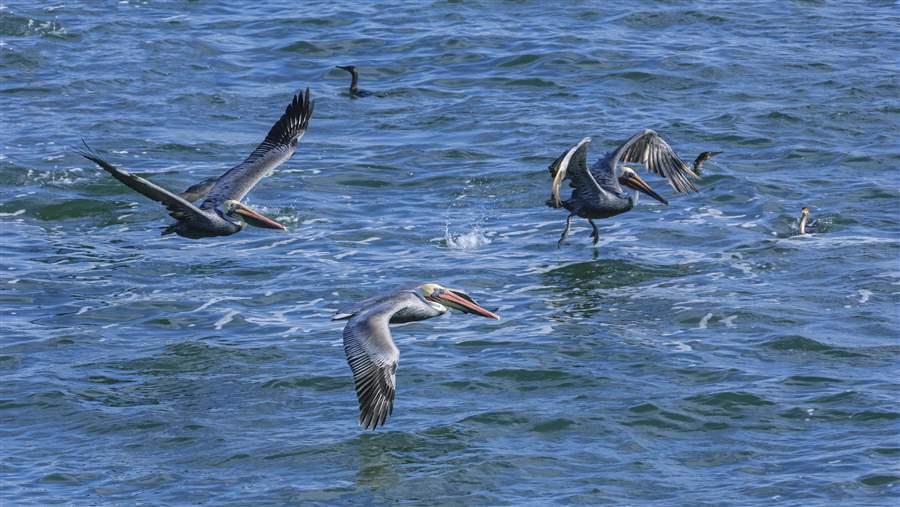 The brown pelican, one of the predator species that Thayer and her team studied, has not bred successfully in the middle of the California Current since being removed from the endangered species list in 2009.

Q: Why are predator-prey relationships so important?

A: The entire food web breaks down without the critical links between predator and prey, so we are concerned about the health of all of their populations. Without healthy prey populations, we cannot sustain our fisheries, either at the midtrophic level, such as sardine and squid, or at the upper-trophic level. The trophic level refers to the position an organism occupies in a food web. We also care about other upper-trophic predators such as seabirds, seals, whales, dolphins, and sharks. These complicated relationships are why we have developed laws and mandates to protect the whole ecosystem, not just one part.

Q: Why can’t predators just eat something else?

A: Predators can be either specialists or generalists. Specialists like brown pelicans need one or two prey types to survive and reproduce, so a lack of either of those causes problems. Generalists may be able to switch between two or more prey types, eating whatever comes their way, but they may still have restrictions—such as prey that is the right size, particularly for a small seabird chick; in the right place, like near a breeding colony where parents must return to feed young or along a migration route; or available at the right time, including during breeding when more food is needed or in winter when other food is scarce. The prey must also contain enough energy because lack of a particular fatty, energy-rich species such as anchovy can slow predator growth and cause problems with nutrition, eventually leading to unhealthy populations. 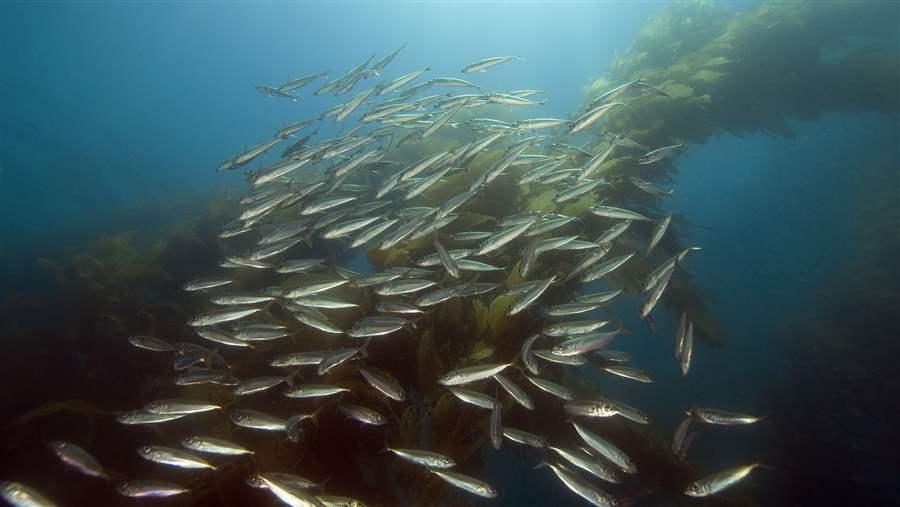 At least 33 percent of the abundance of prey species, such as the Pacific sardine, is needed to sustain their primary predators’ populations.

Q: How do these results apply to other marine ecosystems?

A: A previous study—“Global Seabird Response to Forage Fish Depletion—One-Third for the Birds”—showed that this “one-third rule” applied to seabirds around the globe. Since other predators in the California Current also seem to follow this one-third rule, then other predators in systems around the world may follow it as well. This rule also seemed to hold for different prey types, including small pelagic fishes, including sardine and anchovy; juvenile predatory fishes, such as rockfish; and invertebrates, like squid.

Q: Do you have recommendations for fisheries managers?

A: Variations in climate are predicted to increase, and fishing can add to climate-induced changes in prey populations. Although we can’t directly control climate, we can manage fishing. Precautionary fishing cutoffs—above one-fourth to one-third of recent maximum observed prey populations—may not reverse a downward trend in a prey species but may mean the difference between sufficient versus insufficient prey abundance for predators in changing ocean conditions.