This analysis was updated on Nov. 06, 2019, to update the percentage of the Northern Rockhopper Penguins that live on Tristan da Cunha.

Jutting from the middle of the South Atlantic Ocean, over 2,400 kilometres from the nearest continental land, the peaks of four underwater volcanoes form the Tristan da Cunha archipelago. Due largely to the islands’ remoteness—nearly equidistant from South Africa, South America and Antarctica—the rich biodiversity of this British Overseas Territory is unique and highly vulnerable. 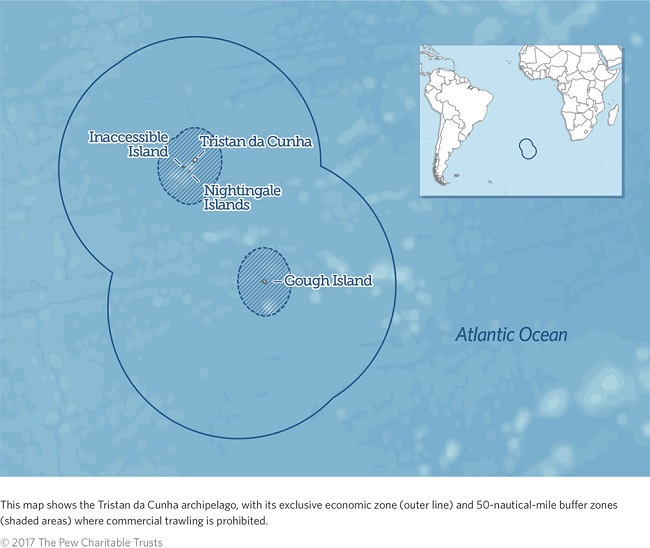 A new report, commissioned by the Pew Bertarelli Ocean Legacy project, detailed the biological profile of the islands and surrounding waters, and assessed the threats to the archipelago’s natural ecosystems and local economy. The report captures the rich tapestry of life on these isolated islands, from the thousands of mating birds to the expanse of kelp forests off their coasts, and highlights threats that include invasive species, climate change, and industrial fishing.

Oasis in an ocean desert

The archipelago is comprised of Tristan da Cunha, the largest and only inhabited island in the group; the islands of Inaccessible and Nightingale, 30 kilometers (19 miles) southwest of Tristan; and Gough, which is a further 380 kilometers (236 miles) to the southeast. Tristan residents claim their home is the most isolated inhabited island in the world, with a community of around 270 islanders in a single settlement called Edinburgh. 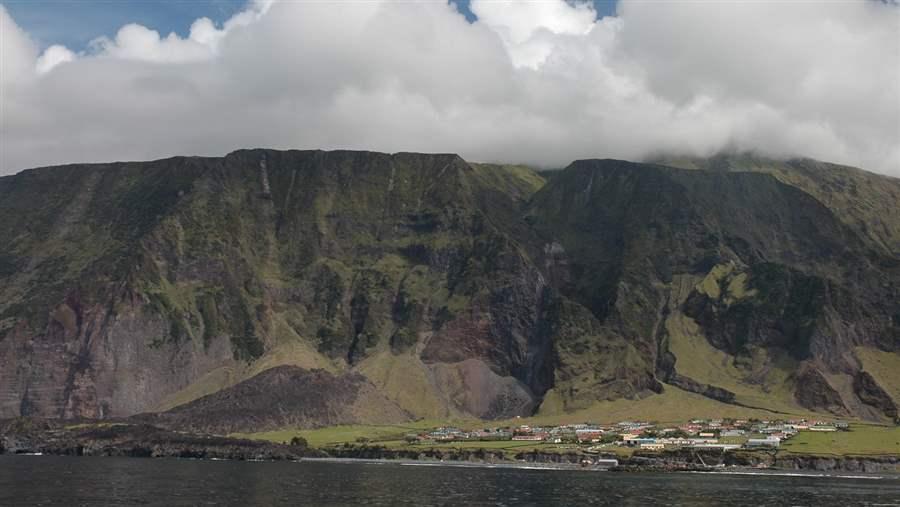 The main settlement of Tristan da Cunha, Edinburgh, hugs a patch of land between the sea and the flanks of the island’s namesake volcano. Its nearest neighbors are the island of St. Helena, 2,000 kilometres (1,200 miles) to the north, and South Africa, 2,400 kilometers (1,500 miles) to the East.

Twenty-five seabird species breed on the islands along with seven species of land birds, including a thrush, four buntings and two flightless rails, which are endemic to the region, are only found here. One of those species, the Inaccessible Rail, is the world's smallest flightless bird. The Tristan da Cunha Islands are also home to the largest proportion of the world’s breeding colonies of Northern rockhopper penguins and four other species endemic to the region: Spectacled petrels, Atlantic petrels, Tristan albatross, and Atlantic yellow-nosed albatross.

Tristan da Cunha is also on a major migration path for marine species. The islands’ waters are a nursery area for Southern right whales and are on the migratory route of the little-known Shepherd's beaked whales. At least nine other cetacean species, including Fin and Humpback whales, are regular visitors to this area.

The human population on Tristan is largely self-sufficient and depends on its rock lobster fishery, which is currently certified as sustainable by the Marine Stewardship Council but is under threat from illegal, unreported and unregulated (IUU) fishing, which is difficult to police in such an isolated place. In fact, IUU fishing here—much of it by foreign crews piloting huge vessels—could hurt the marine environment and the local economy through overfishing of local fish stocks and damage to seabed life, the report concluded.

Another serious threat to Tristan da Cunha’s ecosystems are invasive species, particularly house mice and rats. These rodents, which came to the islands ships, have had a devastating impact on nesting seabird populations, including the Atlantic petrel, endangered MacGillivray's prion, Gough bunting, and critically endangered Tristan albatross. 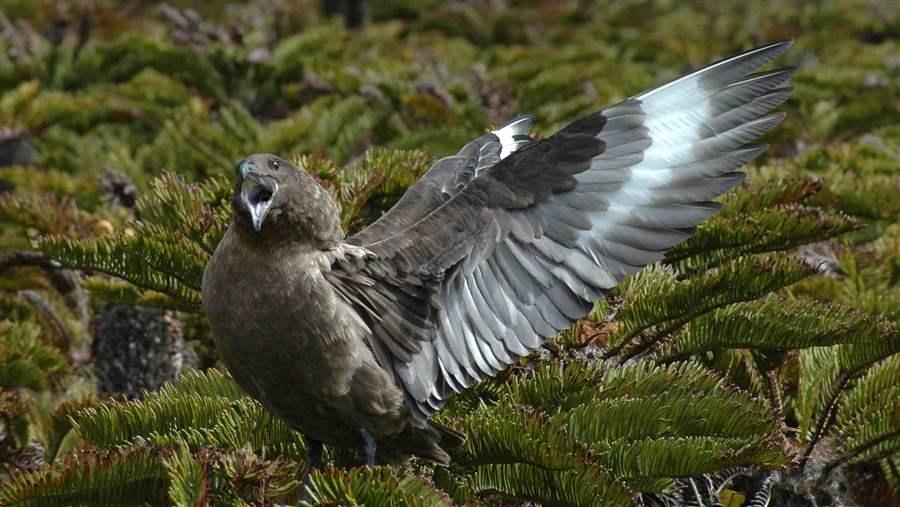 Like many species in remote areas with low human populations and little development, the archipelago’s native flora and fauna have evolved within a limited food web and have little experience defending themselves from invasive species.

In fact, the isolation that makes Tristan da Cunha so ecologically unique also makes it highly susceptible to outside influences.

Those threats are compounded by the mounting impacts of climate change and marine pollution, along with increasing longline fishing by industrial fleets and potential coastal development. These islands also support a small tourism industry, fueled by the brief and infrequent stops of cruise ships and research vessels passing through the area.

Tristan de Cunha is among a shrinking list of places where natural ecosystems have evolved with little human influence. Governments and local communities must work together to protect such environments.

For more information about the biodiversity Tristan da Cunha, see the study.

Related Resource
A Vision to Create a British Ocean Legacy