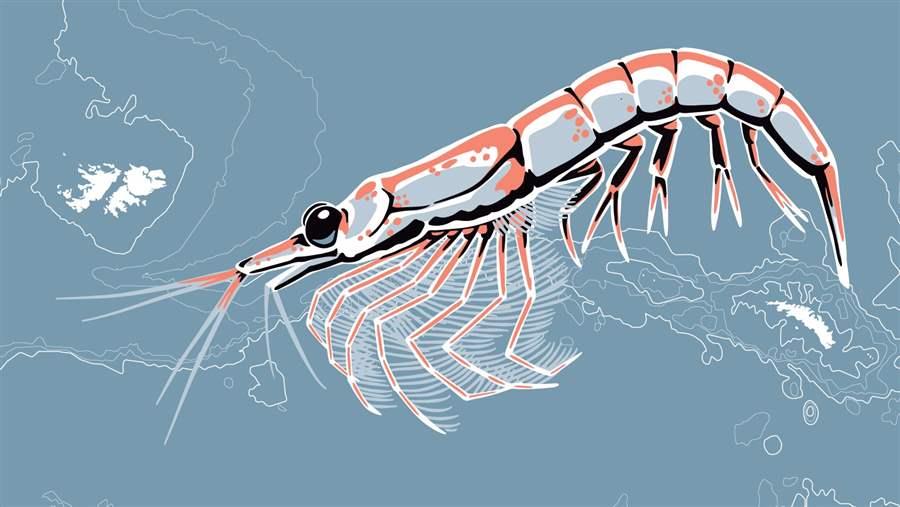 The ocean covers nearly three-fourths of the globe and is home to almost a quarter of the world’s known species—with many more yet to be discovered.1 It plays an essential role in sustaining life by regulating global chemistry and climate and providing sustenance for billions of people.2 But human activities are increasingly threatening the ocean’s health. Many experts and island communities now see the creation of marine reserves as a key tool for rebuilding the abundance and diversity of species while strengthening ocean resilience to climate change.

Studies show that the ecological benefits of reserves extend well beyond their boundaries. Because of what is known as the ‘spillover effect,’ thriving populations of fish within closed areas, such as reserves, tend to move into nearby waters.3 Marine reserves yield the greatest conservation benefits when they are large, highly protected, isolated, well-enforced, and long-standing.4

With its overseas territories, the United Kingdom is custodian of 6.8 million square kilometres (2.6 million square miles), or 1.9 percent, of the world’s oceans—the fifth-largest marine estate in the world. Located in the Atlantic, Pacific, and Indian oceans, these areas include some of the last near-pristine waters on the planet and support rich and diverse wildlife. Altogether, the overseas territories account for 90 percent of the U.K.’s total biodiversity. In recent years, the U.K. has become a leader in marine conservation, through its designation of the Chagos Marine Reserve in the British Indian Ocean Territory (BIOT) in 2010, its March 2015 commitment to create the Pitcairn Islands Marine Reserve, and its plans to establish the Ascension Island Marine Reserve.5

However, only about 2 percent of the world’s ocean has been designated as fully protected marine reserves. Leading scientists strongly recommend that at least 30 percent be protected6 from activities such as industrial fishing and seabed mining. By acting to protect other critical areas, such as South Georgia and the South Sandwich Islands and Tristan da Cunha, the U.K. government has the opportunity to help reach this ambitious conservation goal and safeguard some of the last pristine corners of the ocean for future generations.

Located in the middle of the Indian Ocean, British Indian Ocean Territory comprises 55 islands and vast coral reefs surrounded by some of the healthiest waters in the world. They serve as a refuge and breeding ground for large, critically important marine species such as sharks, dolphins, and green and hawksbill turtles.

In April 2010, the British government announced the creation of a fully protected marine reserve in the BIOT. The designated area totals more than 640,000 square kilometres (247,105 square miles)—more than double the size of the U.K.

The combination of tropical islands, unspoiled coral reefs, and adjacent oceanic abyss—a quick steep drop to the ocean floor—makes this area comparable in global importance to Australia’s Great Barrier Reef or Ecuador’s Galapagos Islands. The exceptional waters contain as much as half of the healthy reefs in the Indian Ocean, one of the most ecologically sound reef systems on the planet.

Through the Chagos Environment Network’s ‘Protect Chagos’ campaign, The Pew Charitable Trusts’ Global Ocean Legacy team played a leading role in protecting the waters of the BIOT, through working with government to secure what was, at the time, the largest fully protected marine reserve in the world. 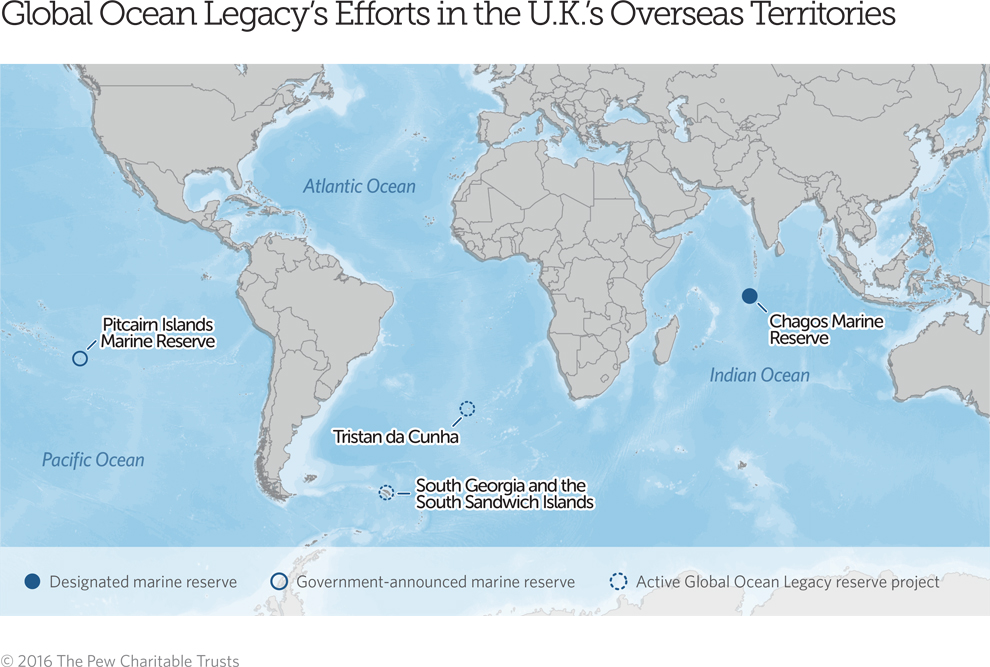 In March 2015, the U.K. declared its intention to designate a marine reserve spanning 834,334 square kilometres (322,138 square miles) in the waters surrounding the remote Pitcairn Islands in the South Pacific. The initiative began in 2013, when Pew and the local elected body, the Pitcairn Island Council, submitted a proposal calling for creation of a reserve to protect these spectacular waters.

Some 1,249 identified species can be found around Pitcairn, including the world’s deepest-known living plant, a species of encrusting coralline algae. The waters also provide an environment for a complex community of hard and soft corals that are home to hundreds of species of fish, including two found nowhere else on Earth: the squirrel-fish and the many-spined butterfly-fish. The area contains at least 69 seamounts and 327 knolls, which are important habitats for many aquatic predators, fish, and invertebrates and are prime places for feeding and breeding.

The reserve designation marked the first time any government has combined creation of a fully protected marine area with detailed surveillance and enforcement plans that include Project Eyes on the Seas, a system that enables government officials and analysts to identify and monitor unlawful activities in global waters and is the most up-to-date technology available.

Opportunities to increase protections in the U.K.’s overseas territories

South Georgia and the South Sandwich Islands sit more than 1,700 kilometres (1,050 miles) from the southern tip of South America in a remote expanse of the South Atlantic Ocean. Mostly uninhabited, the area hosts one of the largest and most varied populations of seabirds and mammals on Earth. The islands are home to significant breeding populations of five of the world’s 18 species of penguins. However, whaling and overfishing have seriously depleted the wildlife of South Georgia and the South Sandwich Islands. Pew and its partners are exploring the feasibility of enhancing marine protections in these waters, where seasonal fishing activity is allowed. Pew looks forward to contributing significantly to a 2018 review of the existing levels of marine conservation.

The waters of the Tristan da Cunha archipelago in the South Atlantic are vast, covering an area about three times the size of the U.K. mainland. They are relatively unspoiled and vitally important for a wide range of fish, birds, whales, and seals. The remote location—about 2,400 kilometres (1,500 miles) east of South Africa—means that a large number of these species are found nowhere else on Earth.

Tristan’s waters are the feeding ground for the Tristan and Atlantic yellow-nosed albatross, as well as the critically endangered spectacled petrel. The petrel’s population has dropped to just 10,000 breeding pairs, all living on the aptly named Inaccessible Island. Tristan’s islands are home to 80 percent of the subantarctic fur seal population and important populations of southern elephant seals. Nearly all of the world’s northern rockhopper penguins inhabit the archipelago.

Pew continues to explore ways to protect the marine environment of Tristan da Cunha, while supporting the environmental and economic needs of the local community. 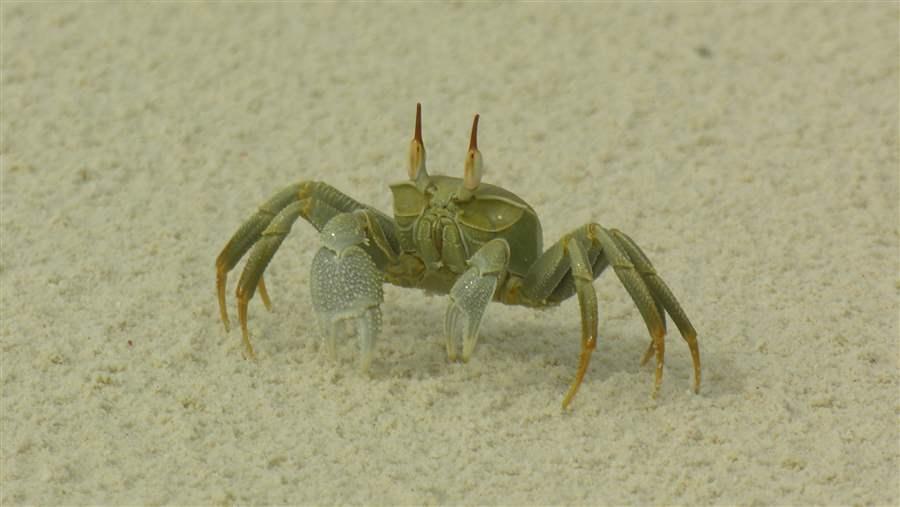 The Chagos archipelago hosts many crab species, including the ghost crab.

The monitoring and enforcement of marine reserve boundaries

Many of the world’s last near-pristine waters are found in remote areas, which presents challenges for effective monitoring and enforcement of marine reserves.

To address this, Pew has partnered with Satellite Applications Catapult, a U.K. government technology initiative, to pioneer Project Eyes on the Seas. This cutting-edge technology merges satellite tracking and imagery with other sources of information, such as fishing vessel databases and oceanographic data, to help monitor seas across the globe.

This ground-breaking system is helping officials detect illegal fishing activity within moments of it happening, allowing enforcement agencies to protect marine reserve boundaries and the ocean life within it.

Global Ocean Legacy (GOL) works with local communities, governments, and scientists around the world to protect and conserve some of our most important and unspoiled ocean environments. The goal is to help create the world’s first generation of great marine parks by securing the designation of large, fully protected reserves at least 200,000 square kilometres (77,220 square miles) in size. To date, Global Ocean Legacy’s efforts have helped safeguard 5.2 million square kilometres (2 million square miles) of ocean habitat.

Pew’s Global Ocean Legacy U.K. team collaborates with island communities and partners in efforts to conserve the biodiversity and marine life of the overseas territories. GOL supported creation of the Pitcairn Islands Marine Reserve and the Chagos Marine Reserve and is exploring better protections for the overseas territories of South Georgia and the South Sandwich Islands and Tristan da Cunha. 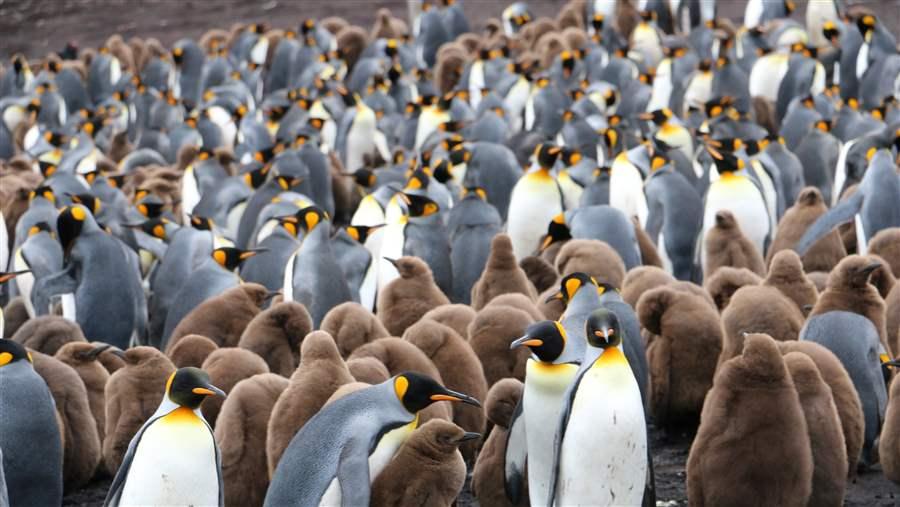 Gold Harbour in South Georgia is a major breeding ground for penguins.