Many have predicted that the loss of summer sea ice in the Arctic will soon trigger a dramatic increase in commercial ship traffic through Canada’s Northwest Passage.  This rests on the assumption that summer sea ice has been the main obstacle to expanded use of this Arctic Ocean shortcut from Asia to Europe, and to easier and more profitable access to Arctic minerals.

But the view that ice is what matters most is not wholly accurate, because economics and other factors can also make Arctic shipping less or more attractive, regardless of ice concentrations. Although the melting of the Arctic is opening up new possibilities for vessel traffic, a recent study by the Canadian government and the University of Ottawa shows that the simple measure of ice extent is not the best indicator of where ships will go and when. Looking at 25 years of data on ship traffic and ice conditions, the authors found two surprises: First, although shipping has been increasing in some areas, traffic in the northern sections of the Northwest Passage has flatlined. Second, the age of the sea ice is more important than the concentration, which may explain shipping companies’ apparent lack of interest in using the route’s more northerly waters.

Arctic sea ice forms in winter and begins melting in spring. Each year, some of the previous winter’s ice lasts through the summer and grows thicker and stronger during the next winter’s freeze. A lot of this multiyear ice is concentrated in the islands of the Canadian Arctic Archipelago and the waters to the north of those islands. Because the ice is thick and strong, it presents a much greater hazard to ships—even when it is relatively sparse—than does first-year ice. Further, ocean currents tend to carry multiyear ice into the waters that provide the most direct shipping lanes through the Canadian Arctic. In short, ice matters in more ways than one. 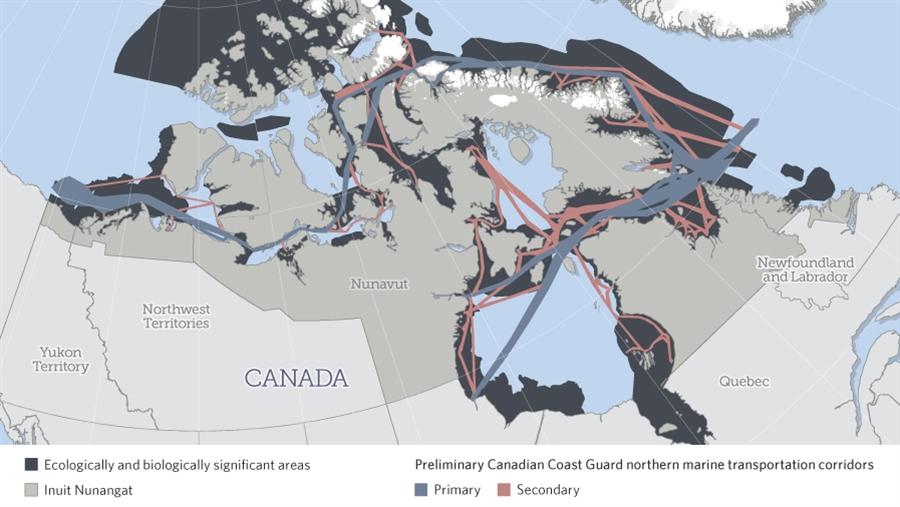 Effective governance is necessary to keep Arctic shipping safe for mariners and to protect Inuit communities and the environment. This governance should include policies that recognize hazards such as multiyear ice. The good news is that, for now, commercial vessels appear to be choosing routes that avoid that risk. In areas where shipping has increased, stakeholders must work with policymakers to establish safe shipping practices and minimize environmental risks.

The Integrated Arctic Corridors Framework report released in April 2016 by The Pew Charitable Trusts lays out a plan for Transport Canada, the Canadian Coast Guard, and Inuit organizations to identify shipping lanes that provide predictability to vessel operators while reducing impacts on the Inuit people and the environment. The report also calls for a governance body to put these ideas into practice and provide oversight.

Make no mistake: As sea ice continues to recede from areas that hold promise for mineral development, there is an increased likelihood that the Northwest Passage will see more vessels and activity. The Arctic Corridors Framework creates a unique precautionary policy tool for managing future shipping scenarios, focusing on the seascapes and important biological habitats that need protection as activity rises in the region.  Arctic shipping will continue to increase, even in areas where multiyear ice is currently found. By getting ahead of the curve with sound, science-based plans, policymakers can prevent future trouble and protect the rapidly changing Arctic.

Henry P. Huntington is a senior officer and science director for Arctic Ocean projects at The Pew Charitable Trusts.