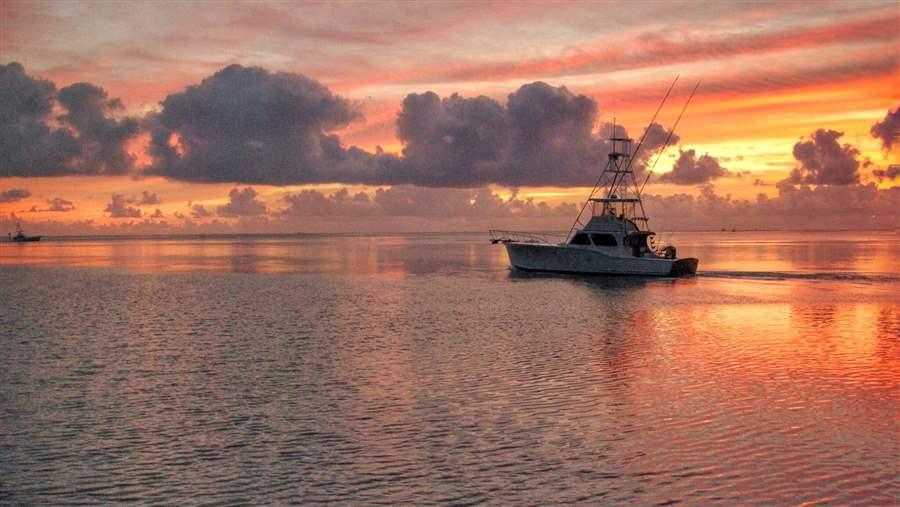 A fishing boat motors near a harbor. Accurate, timely, and geographically based information about catch can help managers ensure robust fish populations, which benefit fishermen, fishing communities, and the ocean.

Note: This post was updated on March 13 to reflect discussions at the March 2017 meeting of the South Atlantic Fishery Management Council.

One of the biggest challenges to ensuring sustainable fishing  is keeping track of who catches what kinds of fish, how much, and where.

So fishery managers in the southeastern U.S. are turning to technology to obtain that information by requiring federally permitted charter-for-hire boat captains, who take small groups of clients out fishing, to log their catch on electronic devices. Historically those managers have gathered fishing information in myriad ways, including dockside inspections and telephone and mail surveys, which don’t yield the most timely data.

Managers won’t scuttle most of those methods, but by adding electronic reporting, they should be able to update catch data faster than in the past, which in turn will help them adjust fishing rules and better judge the health of fish populations. For example, in the Gulf of Mexico, managers should know sooner if charter-for-hire fishermen are nearing their red snapper quota and whether to shorten or lengthen a fishing season. Currently, seasons have a fixed length, and managers sometimes don’t know how much snapper was caught until months after the season ends, when final reports are compiled. Accurate, timely, and geographically based information can help managers adjust catch limits and other rules designed to ensure robust fish populations, which benefit fishermen, fishing communities, and the ocean.

The Gulf of Mexico Fishery Management Council, which governs fishing in federal waters of the Gulf, recently voted to require electronic reports from federally permitted charter boat captains and to modify reporting requirements for captains who run head boats, which typically take out large groups—often more than 40 passengers—and charge each person individually.

Under the new rules, captains would be required to submit their reports before the clients’ fish are unloaded at the dock. Currently, head boat captains are required to submit weekly trip reports. The change should come as welcome news to Gulf for-hire captains, who have been asking for better data collection methods for almost a decade.

The council will provide guidance on types of acceptable catch recording devices, which must be approved by the National Oceanic and Atmospheric Administration’s Fisheries Service, provide GPS location data, and be permanently attached to the boats.

The electronic requirements will go into effect sometime in 2018 if they are approved by the U.S. secretary of commerce.

South Atlantic captains will have new rules in 2018

Unlike Gulf captains, who must file their reports before fish are unloaded at the dock, South Atlantic captains would need to record catch daily but would be required to submit those accounts only once a week, under the new rules. Daily submissions would probably be more accurate, because captains may not keep sufficient notes and may not accurately remember what they caught over a week’s time.  Managers could adjust this timing requirement in the future.

Head boat captains already must submit weekly electronic reports, and the council’s new measure will make the reporting requirements the same for both charter and head boat captains.

In the South Atlantic, a voluntary pilot program is testing software that would allow captains to submit data via a tablet. And some commercial fishermen have been participating in an electronic reporting pilot project to test the feasibility of capturing data electronically for them as well.

The Gulf and South Atlantic councils are working out details about which rules will apply to charter and head boat captains who have permits to operate in both regions.

It will take time for managers to coordinate new collection systems with existing methods of tracking catch and fishing to ensure consistency of data throughout each fishery.  As NOAA Fisheries and the councils move forward, it will be important for them to collaborate with fishermen on designing the reporting systems to get managers the information they need to make good decisions. And because managers will need good information, there must be ways to verify the data to ensure accurate catch accounting.

Allowing captains to access their personal data in the system could be one way to incentivize complete and accurate reporting. They could use the information to spot trends over time, adjust their business plans, and potentially boost profits.

Together, these two new electronic reporting plans are a major step toward modernizing the collection and use of fishery data and providing robust futures for fishermen and the fish species that sustain their businesses.