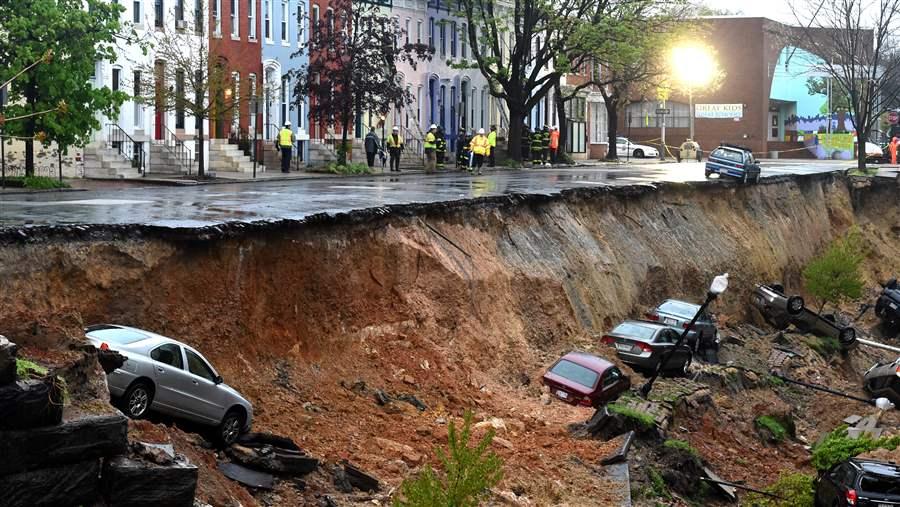 With the number and frequency of severe weather events growing, and with 39 percent of the nation’s population living near waterways, heavily populated and highly developed areas are at increasing risk from floods and hurricanes. That’s why Congress should pass policies that transform the way we design, build, and maintain our nation’s infrastructure with an emphasis on mitigating future flood risk, including making use of nature-based solutions.

The flood threat to U.S. roads, bridges, dams, sewer systems, and even hospitals and schools is compounded by the fact that the federal government historically has underinvested in infrastructure needs. These years of neglect have left much of America’s aging infrastructure dangerously close to failing, according to the American Society of Civil Engineers.

Proposals for infrastructure reform must include sound, lasting investments that are good for communities. Here are two ways to do that.

Healthy wetlands, salt marshes, dunes, and free-flowing rivers can act as holding basins for floodwaters, decreasing the effects of flooding on people, homes, and businesses in adjacent communities while providing habitat for fish and wildlife. Along the coasts, such natural areas act as the first line of defense to reduce the effects of storm surge.

Research has shown that using nature-based solutions to mitigate the threats posed by severe weather can be both economical and long-lasting. For example, one study found that coastal wetlands provide an estimated $23 billion each year in storm protection benefits. Another study found that coastal habitats such as salt marshes and mangroves can be more cost-effective than engineered structures in lessening storm surge and can provide a buffer to properties during storms.

Using the Earth’s natural defenses against storms makes sense, given that the U.S. can’t afford to stop all flooding by building more levees, dams, and seawalls.

Require flood-resistant building from the outset

Designing communities to withstand future floods can help reduce the high cost of the rebuilding that typically follows natural disasters. Today’s investments and plans must consider changing precipitation patterns and sea level rise in forecasting future flood risk. In fact, economic analysis from the Federal Emergency Management Agency found that every $1 invested to reduce disaster risk saves the nation an average of $4 in response and recovery costs.

By making smart investments now, Congress can help the nation meet its future infrastructure needs while greatly cutting the expense of post-storm rebuilding down the line.

The Pew Charitable Trusts hosted a May 23 discussion on the challenges facing our country&rsquo;s infrastructure and approaches to safeguarding it from the effects of severe weather. It centered on ways the Trump administration and Congress can help the United States withstand natural disasters by modernizing infrastructure through smart policy, solid funding, and incorporation of nature-based solutions. Leading mayors shared their perspectives on how the country can finance innovative infrastructure projects that boost global competitiveness and save taxpayer dollars.