One of the longest U.S. economic expansions has lifted personal income in all states. But growth has varied, from a constant annual rate of less than 1 percent in Illinois and Nevada to almost 5 percent in North Dakota since the start of the Great Recession. In six states, personal income fell for the year ending in the third quarter of 2016, hit by factors such as weak energy and agricultural earnings.

States have recovered at different paces. Only in mid-2015 did the final state—Nevada—recover its personal-income losses and return to its pre-recession level. Since the end of 2007, personal income in 17 states has grown faster than in the nation as a whole, after adjusting for inflation.

Looking at recent trends, data indicate that inflation-adjusted personal income rose by 2.2 percent in the third quarter of 2016 from a year earlier, with 18 states outpacing U.S. growth. Although six states recorded year-over-year declines, their personal income remained higher than before the recession. These results are based on estimates and subject to revision, as is Pew’s ranking of states’ growth rates. 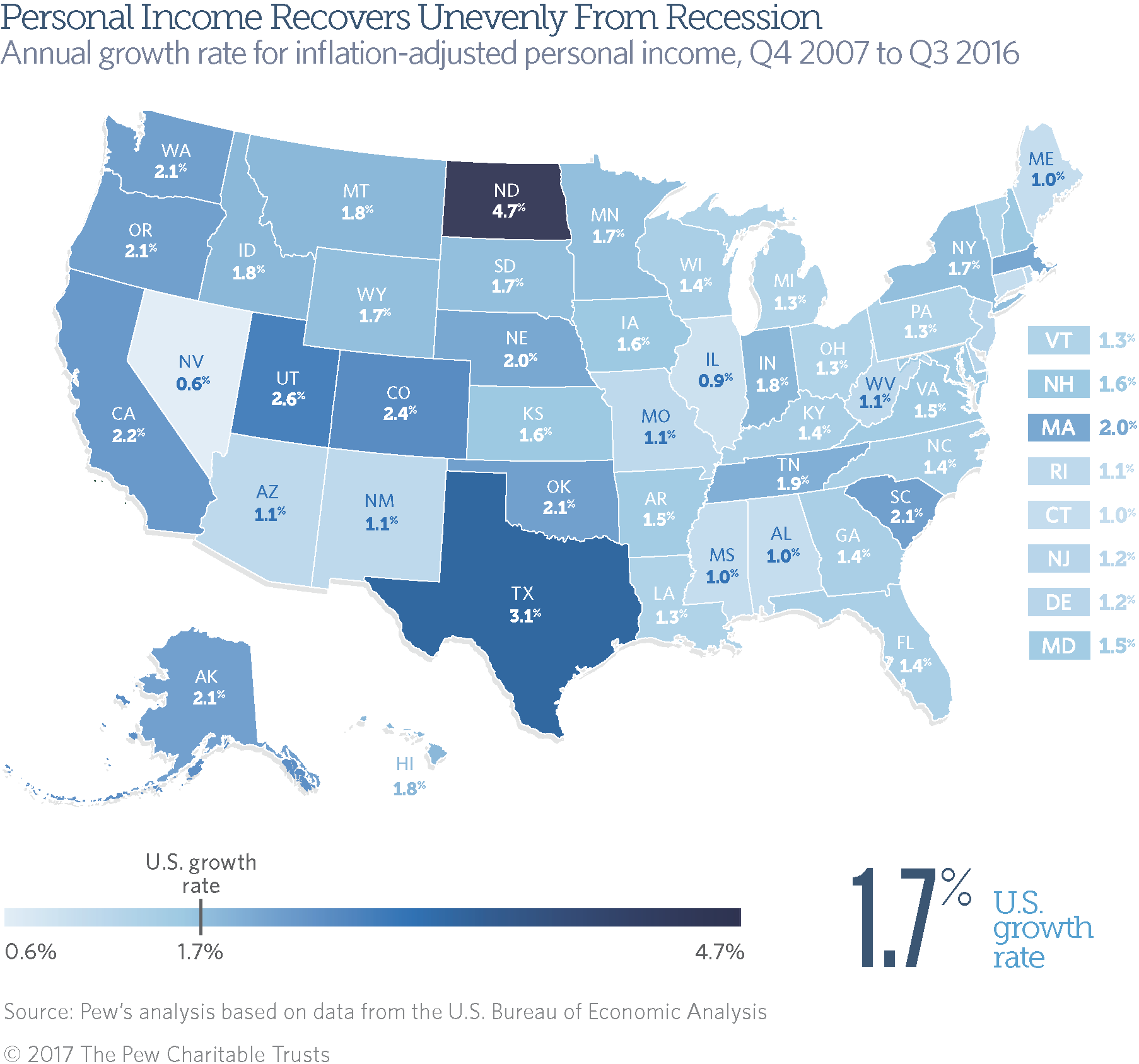 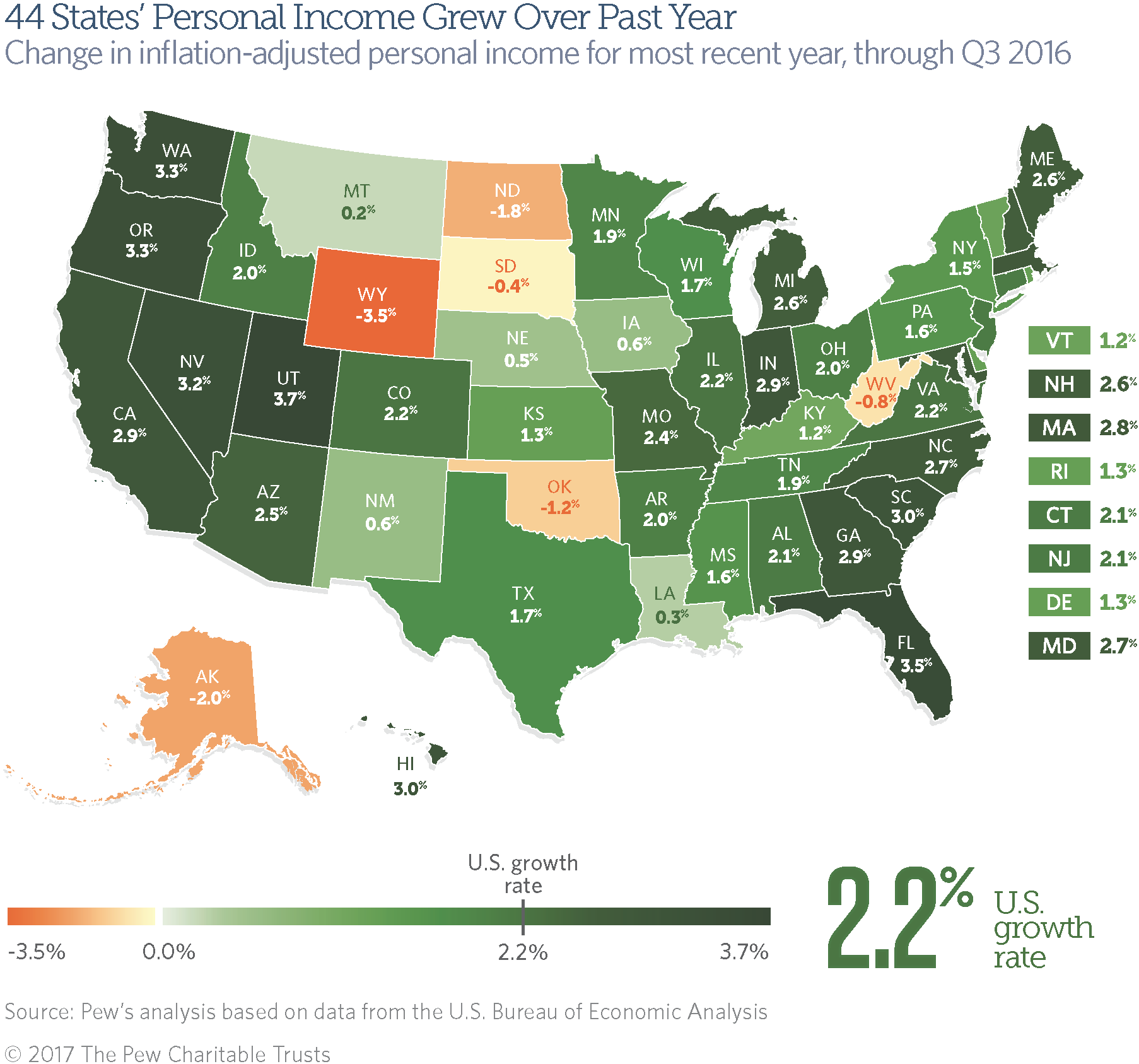 Trends in personal income for the third quarter of 2016, based on preliminary estimates, adjusted for inflation and compared with a year earlier, indicate:

Between the third quarters of 2015 and 2016, personal income rose faster in 33 states than it had since the end of 2007, showing that each state’s economic growth over the past year was stronger than longer-term rates. In 17 states, personal income growth was weaker in the past year than since the recession, signaling that recent economic trends in these states were cooler than their expansions since the recession began.

The steady pace that income would have to rise each year to reach its latest level is the constant growth rate. These rates provide a way to compare states’ growth. However, personal income did not actually change at a steady pace since the recession, instead falling in some years and rising in others. (See the “Year by year” tab for annual results in each state between calendar years 2007 and 2015.)

Comparing total inflation-adjusted dollars in each calendar year, personal income fell in just five states in 2008, but 49 states in 2009, with West Virginia the only state to escape the 18-month recession without a calendar year drop in personal income. The country rebounded over the next three years: Forty-six states’ personal income rose in 2010—Arizona, Delaware, Kansas, and North Carolina being the exceptions. All states saw increases in 2011, and all but Delaware and Georgia experienced gains in 2012. In 2013, personal income fell in 36 states, reflecting a number of taxpayers’ accelerating income into 2012 in anticipation of a potential federal tax increase in 2013. The rebound resumed over the next two years, with personal income rising in every state but Kansas in 2014 and every state but North Dakota and Wyoming in 2015.

Download the data to see state-by-state growth rates for personal income from 2007 through the third quarter of 2016. Visit Pew’s interactive resource Fiscal 50: State Trends and Analysis to sort and analyze data for other indicators of state fiscal health.