Tax collections fell in a majority of states in the second quarter of 2016, ending seven straight quarters of growth in total state tax revenue. Despite the slump, the 50-state total and receipts in 27 states were higher than before their plunge in the Great Recession, after adjusting for inflation.

Declines in 32 states dragged down total state tax revenue in the second quarter of 2016, after accounting for inflation and seasonal fluctuations. States collectively took in 5.5 percent more tax revenue at the midpoint of 2016 than they did in the third quarter of 2008, before receipts fell during the downturn. That compares with a post-recession high of 6.6 percent in the first quarter of 2016.

In the seven years since the recession ended, widespread declines in quarterly state tax revenue have been rare. The only other exception occurred in the first half of 2014 after taxpayers shifted income in response to federal tax changes. The latest declines were largely driven by economic factors, including low energy prices, downturns in the stock market in 2015 and early 2016, and lackluster growth in consumer spending. Tax cuts also contributed to recent declines in a handful of states.

The slide in tax revenue appeared to be temporary, though. Growth resumed in fiscal 2017, which began in July 2016 for most states, but has been modest, according to preliminary figures from the Nelson A. Rockefeller Institute of Government.

New uncertainty loomed for state revenue, however, with the potential for changes to federal taxes in 2017.  Forty states that collect personal income taxes incorporate a range of federal exclusions, deductions, and credits into their tax codes, so federal changes could affect state tax revenue. In addition, the possibility that Congress could cut tax rates or make other tax policy changes could incentivize some taxpayers—especially high-income earners—to start timing income or deductions in anticipation of policy changes that might lower their tax liabilities, creating additional volatility in states’ tax collections.

States’ recovery from tax revenue losses since the onset of the recession has varied widely.  In seven of the 27 states in which tax revenue had recovered by the second quarter of 2016, receipts were more than 15 percent higher than at their inflation-adjusted peak before or during the recession. Conversely, collections in five of the 23 states with below-peak tax revenue were down 15 percent or more, after adjusting for inflation.

A comparison of each state’s tax receipts in the second quarter of 2016 with its peak quarter of revenue before the end of the recession, averaged across four quarters and adjusted for inflation, shows:

The number of states that have shaken off the effects of the Great Recession and regained their tax revenue levels has risen and fallen, reflecting increased volatility in state tax collections. Compared with the previous three recessions, tax revenue growth has been significantly slower during this recovery. 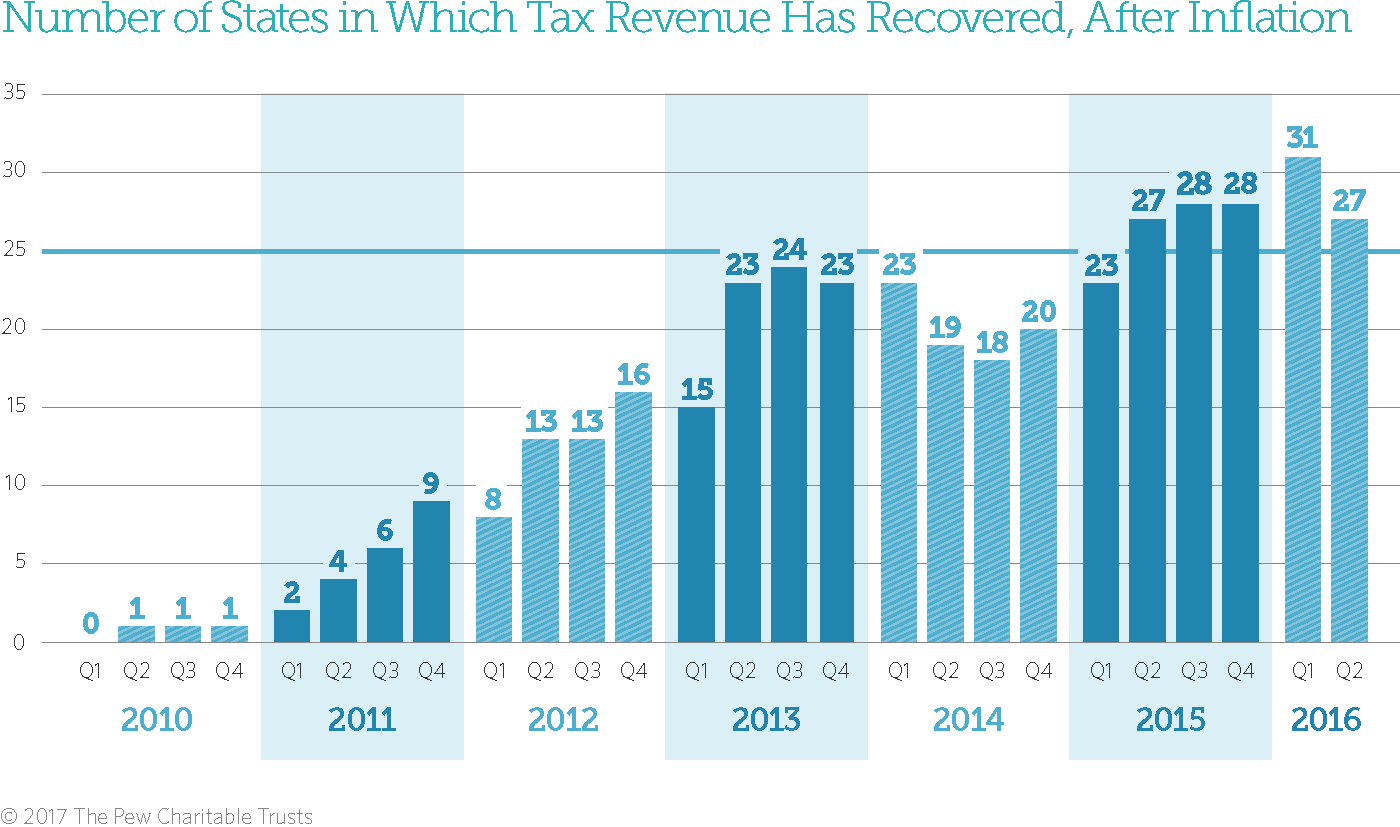 Combined, the 50 states now have the equivalent of 5.5 cents more in purchasing power for every $1 they collected at their 2008 peak. Even states with extra purchasing power since the recession, though, can face budget pressures because of increased expenditures due to population growth, changes in Medicaid costs and enrollment, and deferred or new needs for schools, safety-net programs, corrections, employee salaries and pensions, and road maintenance and construction.

State budgets do not adjust revenue for inflation, so tax revenue totals in states’ own documents will appear higher than or closer to pre-recession totals. Without adjusting for inflation, 50-state tax revenue was 18.3 percent above peak and tax collections had recovered in 45 states—all except Alaska, Florida, Louisiana, Oklahoma, and Wyoming­—as of the second quarter of 2016. Unadjusted figures do not take into account changes in the price of goods and services.

Download the data to see individual state trends from the first quarter of 2006 to the second quarter of 2016. Visit The Pew Charitable Trusts’ interactive resource Fiscal 50: State Trends and Analysis to sort and analyze data for other indicators of state fiscal health.