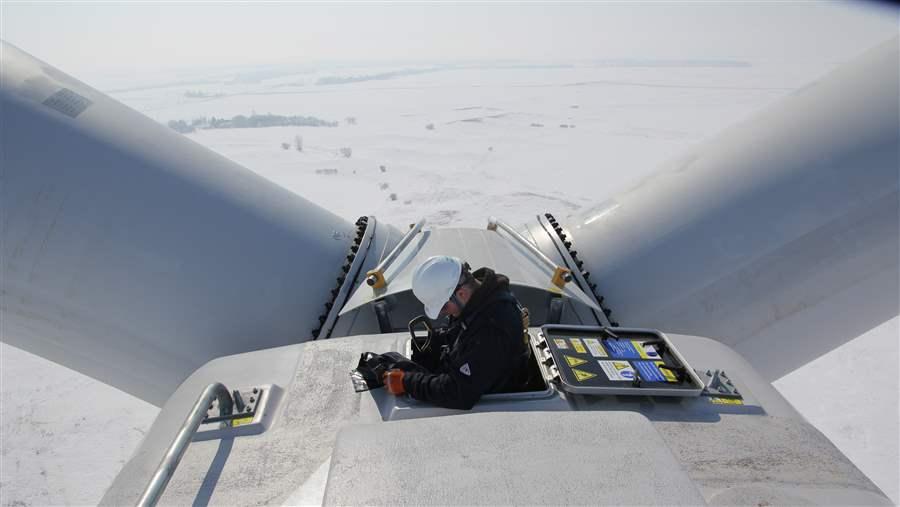 A student in the wind energy technician program at Lake Region State College in Devil’s Lake works on a commercial-scale turbine.

North Dakota is a resource-rich state, with abundant oil, coal, and natural gas, but there still is room in this mix to harness the state’s clean energy potential—particularly wind power.

To this end, I recently highlighted the opportunity posed by the growing global clean energy economy with energy leaders in the state, including North Dakota Governor Jack Dalrymple (R) and a congressional delegation, oil and gas executives, utility representatives, and diverse energy technology providers. An all-of-the-above energy strategy is gaining traction: It was a central theme at the Great Plains & EmPower ND Energy Conference in Bismarck on Oct. 11.

North Dakota is a leader in the clean energy revolution, not only in the wind sector but also in solar power, advanced biofuels, and industrial energy efficiency. Combined heat and power (CHP), which generates electricity and thermal power from a single fuel source, can be used with natural gas, coal, and other fuels. Waste heat to power (WHP), which uses exhaust from industrial processes to generate electricity, harnesses wasted thermal energy along pipelines in North Dakota. Private investment in clean energy projects in the state totaled nearly $1.8 billion from 2009 to 2013 and is expected to grow by an additional $2.9 billion through 2023.

Globally, the private sector invested $328.9 billion in renewable energy technologies last year—the largest amount ever. The U.S. attracted $56 billion of this total, an 8 percent increase over the prior year. Last year was also record-setting for renewable power installation, with 64 gigawatts of wind and 57 GW of solar photovoltaics commissioned. Looking ahead, Bloomberg New Energy Finance projects that renewables will account for 60 percent of all new power-generating capacity added globally over the next 25 years and garner two-thirds—or $7.8 trillion—of private investment in this space. The United States can seize its market share by continuing to innovate, manufacture, and export new technologies.

Recent polling by the Pew Research Center found strong public support across all political ideologies to expand clean energy, such as solar and wind production. Congress should support policy measures that encourage market adoption of clean and efficient energy technologies, such as: