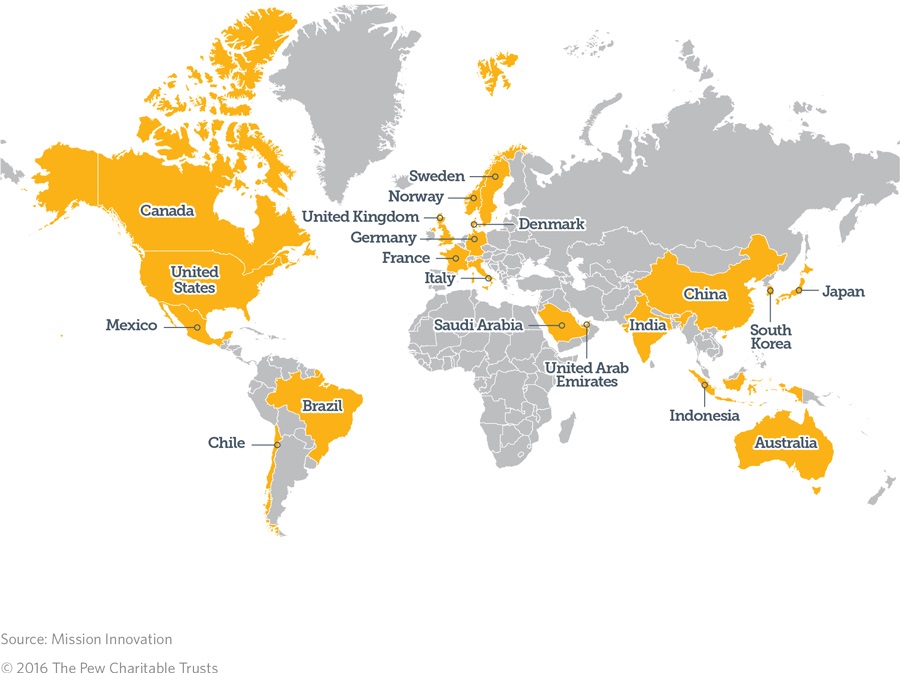 This fact sheet was revised April 11, 2016 to provide updated information on Mission Innovation.

Mission Innovation is a global partnership, launched during the 2015 Paris Climate Change Conference, that will reinvigorate and expedite the development of clean energy technologies to make them more affordable while creating commercial opportunities. These advancements will promote economic growth and increase the reliability and security of power supplies worldwide.1

Announced concurrently with Mission Innovation was the Breakthrough Energy Coalition, an independent group of 28 high-net-worth individuals from 10 countries who have pledged billions in private capital investments for clean energy.2 Led by philanthropist Bill Gates, the coalition will focus on early-stage technologies for transportation; industry; agriculture; and power generation, storage, and system efficiency in Mission Innovation countries.3

Key Aspects of the Initiative

Participating countries seek to increase their governmental clean energy research and development investments by 200 percent over the next five years, with a focus on transformational, scalable innovations—next-generation technologies that rethink how society produces and consumes power resources.

As part of Mission Innovation, the United States will seek to increase federal investments in clean and efficient technology research and development to more than $12 billion by the end of 2020, up from $6.4 billion in fiscal year 2016.

In fiscal year 2016, the United States government will invest $6.4 billion in clean energy research and development activities that range from basic exploration to demonstration efforts and span 12 agencies.4 Supporting many types of low-carbon technologies, government dollars are being spent to explore energy efficiency, renewable power generation, electric grid systems, and advanced transportation systems. These federal investments, in conjunction with policy incentives, have yielded significant cost reductions and expanded clean energy deployment. Over the past six years, prices for land-based wind, rooftop and utility solar, electric car batteries, and LED lighting have fallen by 40 to 90 percent.5

The U.S. Department of Energy implements federally supported clean energy research through a number of mechanisms, including projects conducted in partnership with the private sector, exploration and development activities at the National Laboratories, grants to universities, and support for collaborative centers targeted toward energy technology frontiers.

Despite representing the third-largest industrial sector in the country, energy investments have accounted for only 1 percent of the government’s R&D budget since the mid-1990s.6 By comparison, defense has received almost half of federal research money nearly every year, and health has consumed 20 to 25 percent. Through its participation in Mission Innovation, the federal government will seek to double its investment in clean energy technologies over the next five years, adding $6.4 billion by the end of 2020. It also will improve coordination of domestic work, strengthening ties between U.S.-supported research and businesses, industry, the financial sector, and nonprofit investors to promote continued innovation and support an advanced clean energy economy.

Historically, it takes more than 50 years before you have a substantial shift in energy generation, but we need to do it more quickly. We need to move faster than the energy sector ever has.Bill Gates

The United States has long led the world in energy R&D investments. This public and private sector support for innovation has propelled American leadership in reaching new frontiers and has resulted in major breakthroughs in advanced energy technologies. Acknowledging the size of the opportunity—including the economic, environmental, and societal benefits—the Mission Innovation initiative will provide much-needed support for a globally competitive advanced energy market.