At its September meeting, the Oregon Fish and Wildlife Commission adopted a Forage Fish Management Plan to protect six broad groups of forage fish species in state-managed marine waters, from the coast to 3 miles into the Pacific Ocean. Commercial fishing of lanternfish, sand lance, saury, silverside, smelt, and several types of squid will be prohibited unless and until science clearly shows that it would not have an adverse effect on existing fisheries or the larger ecosystem.

The commission held its meeting in Welches, Oregon, which is nestled at the base of Mount Hood, a long way from the ocean: 130 miles to be exact. Yet even at that distance, the town and its environs are inextricably connected to the Pacific. Wild salmon and steelhead begin and end their lives in the nearby Sandy River and its tributaries, and for those fish, completing the cycle—from birth until they return to those rivers to spawn—depends on a healthy Pacific marine ecosystem, specifically a vibrant food web with abundant forage fish.

Oregon’s Forage Fish Management Plan, the first of its kind for marine waters in the state, is a welcome signal of a growing national shift toward ecosystem-based fisheries management, an approach that keeps the broader ecosystem and factors such as the ocean food web in mind when making key management decisions. The new state protections cover an area of more than 1,200 square miles of ocean and build upon similar measures enacted this year in federal waters of the Pacific Ocean (from 3 to 200 miles offshore) that extend over 307,000 square miles.

By conserving this crucial part of our ocean food web, the plan will help sustain Oregon’s most treasured marine wildlife, including salmon, steelhead, seabirds, and whales, for generations to come.

Thousands of Oregonians showed support for the new safeguards. At the Sept. 2 meeting, Commissioner Holly Akenson said: “It’s remarkable to see the diversity of support for this plan. I believe this provides [the commission] with a big green light to move forward.” 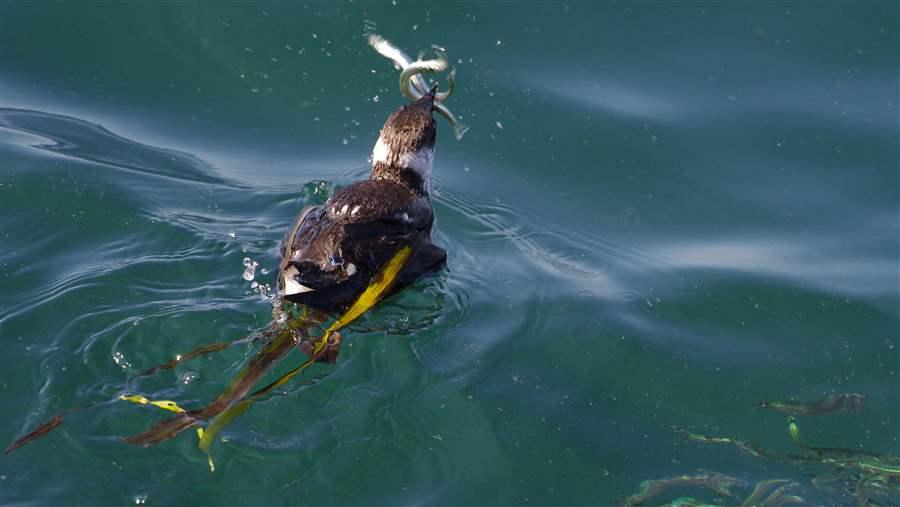 A juvenile marbled murrelet feasts on sand lance near Yaquina Bay, Oregon. The sand lance is one of the species that will be protected under the new Forage Fish Management Plan from the Oregon Department of Fish and Wildlife.

And Commissioner Laura Anderson asked, “How great is it to open The Oregonian and see a letter from a commercial fisherman, a sport fisherman, and a conservationist all praising the Oregon Department of Fish and Wildlife for doing something right?”

With the adoption of the regulations, Oregon joins Washington state, as well as the federal government, in protecting these forage species in their Pacific waters, leaving only California without such safeguards. The California Department of Fish and Wildlife has a forage species policy framework in place and has signaled its intention to move forward with implementing regulations this year. Stay tuned as this issue progresses.

And please take a moment to thank the Oregon Department of Fish and Wildlife for protecting forage fish—after all, these little fish are a big deal for Oregon.