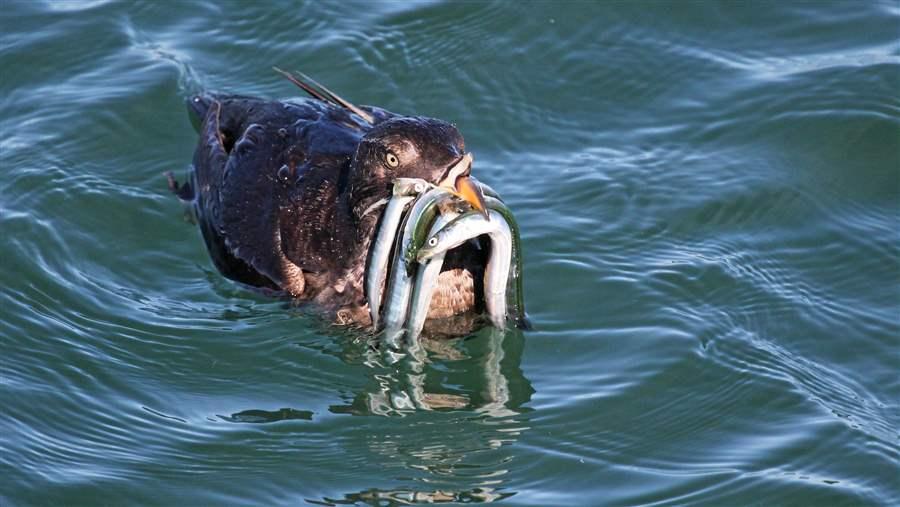 A rhinoceros auklet off the coast of Washington state holds a beak full of sand lance, one of the species of forage fish protected by a new federal rule announced by the National Oceanic and Atmospheric Administration’s Fisheries Service.

It's safe to say that Joni Mitchell wasn't thinking about forage fish when she wrote the lyric “You don't know what you've got till it's gone.” But that refrain, from her 1970 hit song, “Big Yellow Taxi,” perfectly captures the need for policies to protect small baitfish.

Sardines and anchovies are great examples of forage fish whose critical roles in the ocean food web are rarely noticed until their numbers plummet. Both of those species’ populations appear to be at critically low levels on the West Coast, and the Pacific marine ecosystem is suffering the consequences. Starving sea lion pups and brown pelican breeding failures are two visible examples.

The poor state of Pacific sardines and anchovies highlights the need for fishery managers to do all they can to conserve those and other species of forage fish. Today, the National Oceanic and Atmospheric Administration’s Fisheries Service (NOAA Fisheries) took a big step in that direction by finalizing a rule prohibiting commercial fishing from starting on seven broad groups of prey species until fishery managers assess how that fishing would affect the broader ecosystem. This officially enacts a policy adopted unanimously in 2015 by the Pacific Fishery Management Council, which manages fishing in federal waters three to 200 miles off the coasts of California, Oregon, and Washington.

NOAA Fisheries deserves praise for this landmark decision, which shows that the agency recognizes that a healthy ocean depends on maintenance of an abundant and diverse array of forage fish species.

Chances are you’ve never heard of saury or sand lance, yet these and dozens of other species of little fish are a big deal for ocean health. Depending on the time of year and the place where they are measured, the newly protected forage fish species can be an enormously important food source for seabirds, marine mammals, and fish such as tuna and salmon. For example, one large category of deep-dwelling forage fish, called mesopelagics, makes up a source of biomass so large that the U.S. military once considered hiding its submarines beneath the vast layers of fish.

By one measure, the unmanaged forage fish species protected today account for more than half of the total number of prey species caught in research trawls off the West Coast between 2010 and 2013.

NOAA’s decision culminates five years of study and public participation, including tens of thousands of comments sent to decision-makers. The proposal earned support from a broad cross-section of stakeholders, including recreational and commercial fishermen and organizations advocating for conservation, ecotourism businesses, and restaurants. In fact, fishery managers have described the broad base of support on this issue as unprecedented.

There is more work to be done in protecting our nation’s forage fish. Here on the West Coast, policymakers in California and Oregon can use this decision as a road map for protecting forage fish in state-managed marine waters. Fishery managers in the East are also looking to the landmark decision as an example of precautionary management that could be applied to currently unmanaged forage fish species along the mid-Atlantic coast.

Fishermen, scientists, and ocean advocates all understand that little fish are a big deal for ocean health and that it’s best to know what you’ve got—and protect it—before it’s gone.