The share of states’ own money spent on Medicaid health care coverage for low-income Americans fell slightly in fiscal year 2014, even as enrollment in the program spiked. Still, Medicaid’s claim on state revenue was the third largest in 15 years, consuming 16.8 cents of each state-generated dollar in fiscal 2014—4.6 cents more per dollar than in fiscal 2000.

Although every state spent more on Medicaid than in 2000, the effect on their finances has varied after factoring in how much revenue each took in. In 2014, only two states—New York and North Dakota—spent a smaller slice of their own dollars on Medicaid than in 2000, while 17 states spent their largest percentage of any year since 2000. States jointly fund Medicaid with the federal government.

One of the major drivers of the long-term growth in Medicaid spending was increased enrollment, which almost doubled from 2000 to 2014. Because Medicaid is an entitlement program, states must provide certain federally required benefits for any eligible enrollee. Higher enrollment from 2000 to 2013 was due to a number of factors, including two economic downturns, which caused people to lose jobs and associated health insurance coverage; and a gradual erosion of employer-sponsored insurance. In 2014, millions of people joined the program as the federal Affordable Care Act (ACA) was implemented, but the federal government absorbed most of the associated expense. 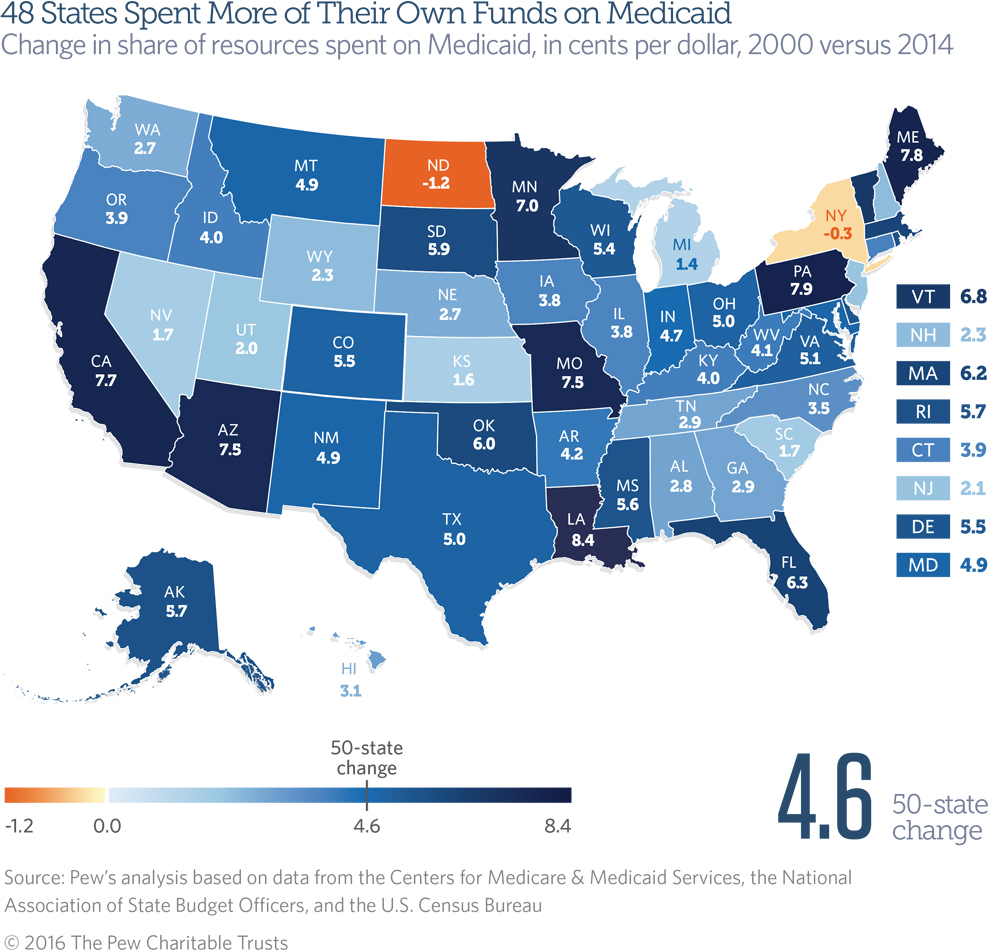 Medicaid is most states’ biggest expense after K-12 education. States in 2014 collectively spent $202.5 billion of their own resources to provide health benefits for eligible low-income Americans. This was a $2.8 billion increase from 2013. But because states' revenue rose faster than states’ Medicaid bills, the program accounted for a smaller percentage of state-generated dollars: 16.8 percent—or 16.8 cents of each dollar—compared with 17 percent in 2013.

The states’ 1.4 percent spending increase between 2013 and 2014 was small compared with the increase in the program’s total costs. Total Medicaid spending rose by $39.6 billion—or 8.6 percent—in 2014 as nearly 8 million more people gained coverage in the first year of the ACA’s expansion of the program—the largest year-over-year net enrollment increase on record. States were shielded from much of the cost increase because the U.S. government agreed to reimburse 100 percent of expansion costs through 2016 for states that chose to extend health coverage to newly eligible low-income adults, gradually dropping to 90 percent in 2020.

Among 20 states where spending fell as a share of own-source revenue from 2013 to 2014, 15 had expanded their Medicaid programs in accordance with the ACA.

Medicaid’s claim on each revenue dollar affects the share of state resources available for other priorities, such as education, transportation, and public safety. Because Medicaid entails certain mandatory spending, policymakers have less control over growth in their states’ costs than they do with many other programs. The state Medicaid spending indicator excludes federal support and examines only the cost to states because that spending has a direct impact on state budgets, which rely on state-generated revenue.

A comparison of states’ Medicaid spending relative to their own resources in 2000 and 2014 shows:

Medicaid is a state-administered program, but the federal government covers from 50 to 75 percent of each state’s Medicaid bills, for a total of 59.4 percent of costs nationwide in 2014. 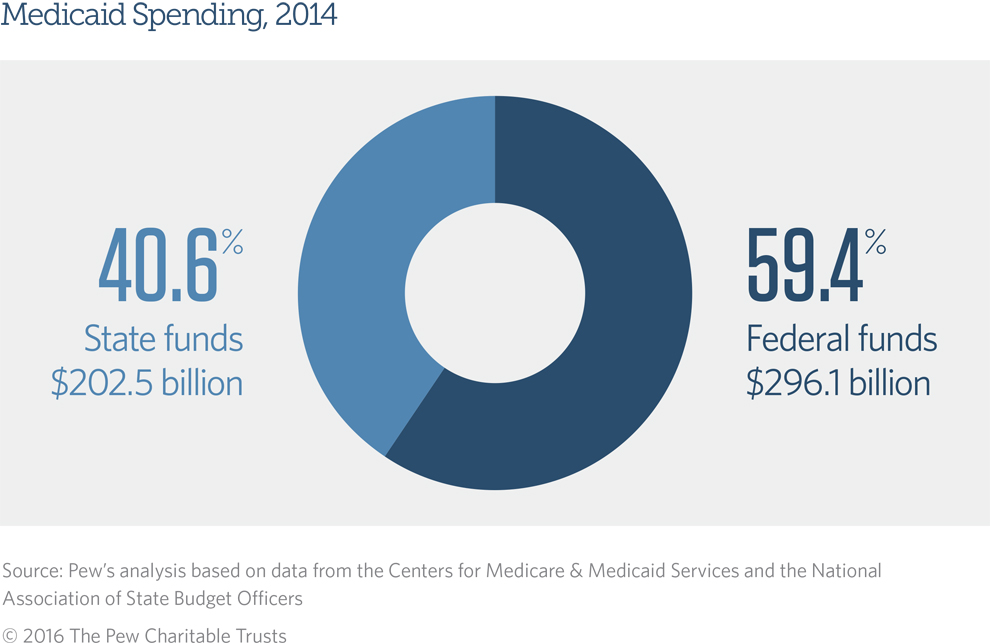 The latest 50-state data reflect the first nine months of the Affordable Care Act’s Medicaid expansion, which took effect in January 2014. The law expanded Medicaid eligibility to all individuals under age 65 who earn up to 138 percent of the federal poverty level, a change that the Supreme Court later ruled was optional for states. Twenty-six states expanded their programs in accordance with the ACA during the federal fiscal year ending September 2014, the time frame for this analysis. Only Michigan and New Hampshire did so in April and August, respectively, rather than in January.

The proportion of federal reimbursement that states receive is one of several factors that influence the wide range in the share of their own-source revenue spent on Medicaid. This variation is attributable not only to state Medicaid policy decisions—the breadth of health care services covered, eligible populations, and provider payment rates—but also to tax and other policy decisions that determine state revenue. Variation also is driven by factors outside of policymakers’ control, such as state economic performance, demographics, resident health status, and regional differences in health care costs and practices. (For more information, see “State Health Care Spending on Medicaid.”)

Download the data to see individual states’ Medicaid spending as a share of own-source revenue for each fiscal year from 2000 to 2014. Visit Pew’s interactive resource Fiscal 50: State Trends and Analysis to sort and analyze data for other indicators of state fiscal health.