Tax revenue has recovered slowly and unevenly after falling in every state during the Great Recession. By the end of 2015, tax collections had bounced back in 29 states after accounting for inflation, even though receipts slumped in a number of states late in the year.

State tax revenue increased nationally and in most states in 2015, but pockets of new fiscal stress also emerged.

Nationally, total state tax revenue recovered in mid-2013 from losses in the recession that ended in 2009. At the close of 2015, states collectively took in 6.5 percent more tax revenue than they did in the third quarter of 2008 before receipts plunged in the recession, after accounting for inflation and seasonal fluctuations.

But the national trend masks how widely recovery has varied across the states. In eight of the 29 states in which tax revenue had rebounded by the fourth quarter of 2015, receipts were more than 15 percent higher than at their inflation-adjusted peak before or during the recession. Conversely, collections in four of the 21 states with below-peak tax revenue were down 15 percent or more, after adjusting for inflation.

Total state tax revenue rose for the sixth straight quarter at the end of 2015, which is midway through most states’ fiscal year 2016, although state-by-state results were mixed. In 16 states, including most of the nation’s top oil producers, tax collections fell in the final quarter of 2015. Besides a steep drop in energy prices, other reasons for tax declines included a weak stock market, state tax cuts, or growth that was slower than inflation.

A comparison of each state’s tax receipts in the fourth quarter of 2015 with its peak quarter of revenue before the end of the recession, averaged across four quarters and adjusted for inflation, shows:

In 2015, eight additional states surpassed their recession-era tax revenue peaks in inflation-adjusted dollars, bringing the total to 29. The increasing number of states to regain their tax revenue levels shows that the effects of the Great Recession are receding—but slowly. By this time after the 2001 recession, which was shorter and less severe, tax collections had rebounded in all but one state—Michigan. 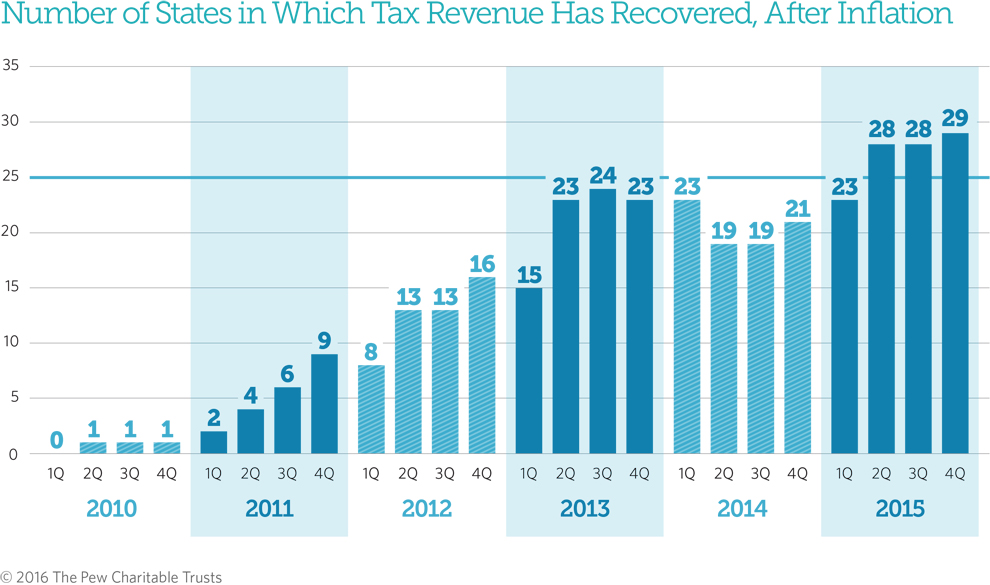 Combined, the 50 states now have the equivalent of 6.5 cents more in purchasing power for every $1 they collected at their 2008 peak. Even states with extra purchasing power since the recession, though, can face budget pressures because of increased expenditures due to population growth, changes in Medicaid costs and enrollment, and deferred or new needs for schools, safety-net programs, corrections, employee salaries and pensions, and road maintenance and construction.

Looking ahead, total state tax revenue is expected to grow—though at a slow pace—through fiscal 2017. Preliminary figures show that tax revenue growth was sluggish through the second quarter of 2016, the end of fiscal 2016 for most states, according to the Nelson A. Rockefeller Institute of Government.  Most states’ own forecasts through fiscal 2017 show less robust growth than in fiscal 2015 in both personal income and sales taxes, which would result in only modest increases in total receipts, Rockefeller reported. Stock market volatility and low oil prices were expected to cause continued uncertainty for some states.

State budgets do not adjust revenue for inflation, so states’ own documents may show tax collections closer to pre-recession totals. Without adjusting for inflation, 50-state tax revenue was 18.3 percent above peak and tax collections had recovered in 46 states—all except Alaska, Florida, Louisiana, and Wyoming­—as of the fourth quarter of 2015. Unadjusted figures do not take into account changes in the price of goods and services.

Download the data to see individual state trends from the first quarter of 2006 to the fourth quarter of 2015. Visit The Pew Charitable Trusts’ interactive resource Fiscal 50: State Trends and Analysis to sort and analyze data for other indicators of state fiscal health.