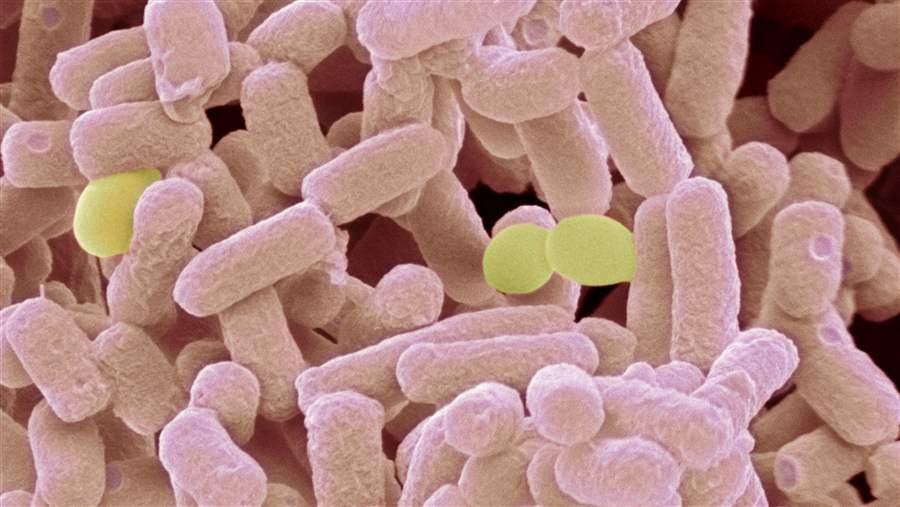 In November 2015, researchers in China discovered mcr-1 in a strain of E. coli isolated from a pig. Since then, countries around the world have found mcr-1 in many different types of bacterial samples from humans, animals, food, and the environment (e.g. water sources).

A new type of antibiotic resistance, first discovered in China at the end of 2015, has been found in bacterial samples from around the world, including the U.S. This resistance is of particular concern because it is caused by a gene, known as mcr-1, that not only makes bacteria resistant to colistin—an antibiotic of last resort in human medicine—but also is readily transferable to different kinds of bacteria. Experts believe that as mcr-1 spreads further and combines with other resistant bacteria, it will create new types of multidrug-resistant bacteria that existing antibiotics may not be able to defeat.

A: Mcr-1 is a recently discovered gene that makes bacteria resistant to colistin, one of the few medications that doctors can still turn to in fighting serious and life-threatening infections that are resistant to other treatment options. A similar gene, mcr-2, was identified by Belgian researchers in June 2016, but more study is needed to understand whether it poses a threat that is distinct from mcr-1.

Q: Why is the discovery of mcr-1 so alarming?

A: The most troubling characteristic of mcr-1 is the ease with which it can move from one bacterium to another, spreading colistin resistance to a wide variety of bacterial species. Mcr-1 is highly mobile because it is located on a small piece of bacterial DNA known as a plasmid, which can easily be shared when different bacteria come into contact with it.

This means that when mcr-1 transfers to bacteria with other types of drug resistance—for example, carbapenem-resistant Enterobacteriaceae (CRE)—it has the potential to create a new variety of superbug, resistant to every antibiotic we have. In recent years, colistin has often been the only effective treatment option for patients with CRE, and with the discovery of mcr-1, we face the very real possibility of even colistin being rendered ineffective.

Q: When was mcr-1 first discovered?

A: In November 2015, researchers in China discovered mcr-1 in a strain of E. coli isolated from a pig. Since then, countries around the world have found mcr-1 in many different types of bacterial samples from humans, animals, food, and the environment (e.g., water sources). Researchers have not yet determined when mcr-1 first emerged or how long it went undetected.

Q: Is this the first time we’ve found bacteria resistant to colistin?

Q: Has mcr-1 been found in bacteria other than E. coli?

A: Yes. In addition to E. coli, mcr-1 has been identified in Klebsiella, Salmonella, and Shigella bacteria. Given the nature of this type of colistin resistance, scientists expect it will continue to spread to other types of bacteria.

Q: How did this type of colistin resistance develop?

A: The more antibiotics are used, the less effective they become. Sooner or later, bacteria will evolve to defeat every antibiotic we have. So, although researchers do not know precisely when, where, or how mcr-1 developed, use of colistin over time was probably a driver in the emergence of mcr-1.

Colistin is used sparingly in humans, as a treatment of last resort, and is not approved for agricultural use in the U.S.  However, a similar antibiotic—polymyxin B—was approved by the U.S. Department of Agriculture for use in food animals in 2014. Additionally, colistin is widely used as part of animal agriculture in other countries around the world. All of this use contributes to the development of resistance.

Q: What threat does mcr-1 pose to human health?

A: Researchers are still trying to figure out how widespread mcr-1 is and what the possible implications are for patients in the near and long term. However, the fact that this type of easily transferable colistin resistance exists is an ominous development. It jeopardizes the effectiveness of one of the few remaining antibiotics that can still defeat some of the most dangerous infections and raises the specter of an untreatable superbug.

Q: Is there anything we can do to prepare for the spread of new types of antibiotic resistance such as mcr-1 and mcr-2?

A: The discovery of mcr-1 and mcr-2 underscores the urgent need for better stewardship of the antibiotics we have and for new types of antibiotics that can defeat increasingly resistant bacteria.

We must also improve and better utilize our public health surveillance systems to quickly detect and track emerging pathogens. Further, we need more data on how antibiotics are being used and the epidemiology of resistance to understand how mcr-1, mcr-2, and other types of resistance spread.

The National Antimicrobial Resistance Monitoring System for Enteric Bacteria has played a key role in identifying food animals carrying mcr-1-positive bacteria in the U.S., and the Centers for Disease Control and Prevention is working to increase reporting of antimicrobial use and resistance in humans as part of its National Healthcare Safety Network. However, additional resources are needed to expand and better integrate these systems with other surveillance and data collection tools in the U.S. and globally.

A House Energy and Commerce subcommittee heard sobering testimony June 14 from government scientists warning that the United States must strengthen its efforts to better understand and combat antibiotic resistance, a pressing threat to public health.