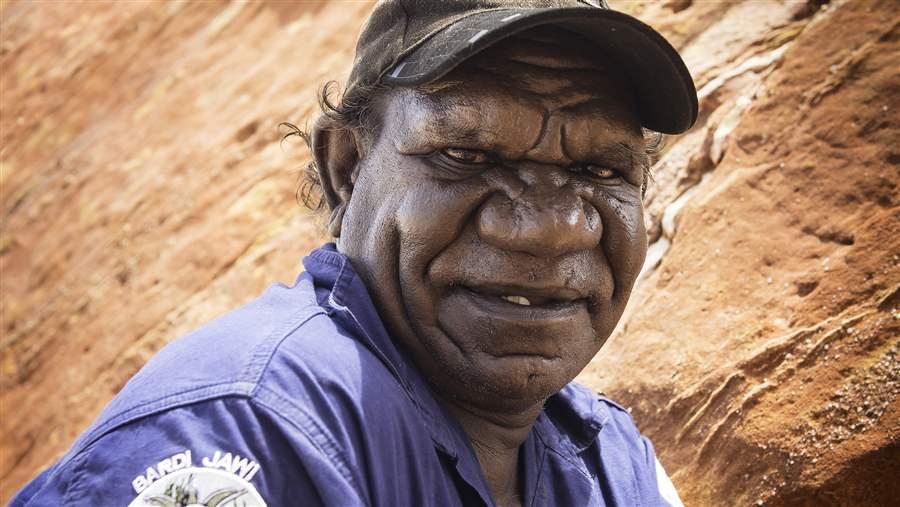 Longtime ranger Chris Sampi is pictured at the Bardi Jawi Indigenous Protected Area. Pew strongly supports both the ranger and protected area programs, especially thorough the Country Needs People campaign, which works with an alliance of over 25 grassroots Indigenous organisations across Australia.

The caption for this analysis was updated on July 2016.

While the results of the recent Australian federal election have been anything but clear, the success of the government-funded Indigenous Ranger and Indigenous Protected Area (IPA) programs was obvious before the marathon campaign even began.

Two days before the election was called, the Department of the Prime Minister and Cabinet released the findings of a major analysis of five federally funded IPAs across four Australian states.

Pew strongly supports both the ranger and protected area programs, especially thorough the Country Needs People campaign, which works with an alliance of over 25 grassroots Indigenous organisations across Australia. The alliance represents hundreds of existing rangers, many millions of hectares of IPAs and many aspiring groups keen to lead their own local land and sea management activities.

These two programs are robust and successful examples of grassroots Indigenous initiatives in land and sea management meeting thoughtful government policy. They are a genuine partnership for getting the best for land and sea management by combining local knowledge with science in a way that delivers valued jobs for local people and a healthier environment for all.

Both programs are also a big successes in financial terms. The review estimated that “between the 2009 and 2015 financial years, an investment of $35.2m from Government and a range of third party investors has generated social, economic, cultural and environmental outcomes with an adjusted value of $96.5m” across the five IPAs studied. This estimate is a fraction of the value returned from the 70 IPAs and many ranger groups that exist across Australia.

These findings are supported by an earlier Pew paper, Working for Our Country, which described IPAs and Indigenous Rangers as a “world-leading model of protected area management” and concluded that the Indigenous Rangers program creates “numerous spillover benefits to Indigenous communities … and to the wider, national economy in terms of better health outcomes, less crime and improved environmental and heritage protection.”

Despite the strong evidence of successes, the future of the IPA and Indigenous Ranger programs is not clear. Many IPA and ranger groups are on funding contracts that are currently slated to end on or before June 2018. This is where clarity and a strong sign of future growth and investment are needed to build on the gains.

But Pew is optimistic that there is enough recognition of the great value for people and nature these programs bring. During the election the Liberal party coalition government reiterated its support for Indigenous Protected Areas and Indigenous Rangers through the Working on Country program.  Both programs have a long, positive legacy as they were initiated by former Liberal/National governments in response to strong on-ground leadership from Indigenous groups.

We’ve also seen the Labour opposition make a fully costed commitment to double Indigenous Ranger jobs nationally over five years, The Greens party has committed to a substantial package including long-term contracts, and key independents in the Senate and the House of Representatives support doubling Ranger jobs.

The objective now is to get all parties to commit to growing and securing both programs to build on these impressive environmental, social and economic returns.

These important programs are “overcoming barriers to addressing Indigenous disadvantage and engaging Indigenous Australians in meaningful employment to achieve large scale conservation outcomes.”  But the review also found that “there would be no continuous change without ongoing investment.”

As one Ranger interviewed during the review described the program:

“Before we returned here, it was empty country. … The country was damaged by uncontrolled fires and there were buffalo everywhere. The land management and the IPA helps us fix this. We pass on the knowledge to the children so that they know their language, and about the plants and animals.”

“Here we have healthy country and culture, and everyone has a healthy body and healthy mind.”

“When I see the young people on Minyumai, it makes me smile. ... I feel inspired by them.”

But perhaps the best summary came from a primary school student who simply said, “I want to be a Ranger when I grow up."

It is almost eight years since the first Indigenous Ranger group was funded as part of the Australian Government&rsquo;s Working on Country initiative. There are now approximately 770 Indigenous Rangers full-time-equivalent positions across 108 ranger groups nationally, which were funded through the initiative plus some additional funding from the Indigenous Advancement Strategy.

Australia is leading the way in Indigenous land and sea management by using ranger groups to manage protected areas across the country through two important programs: Working on Country and Indigenous Protected Areas (IPAs). These programs help manage the health of the Outback while also delivering important economic and social benefits to Indigenous people.