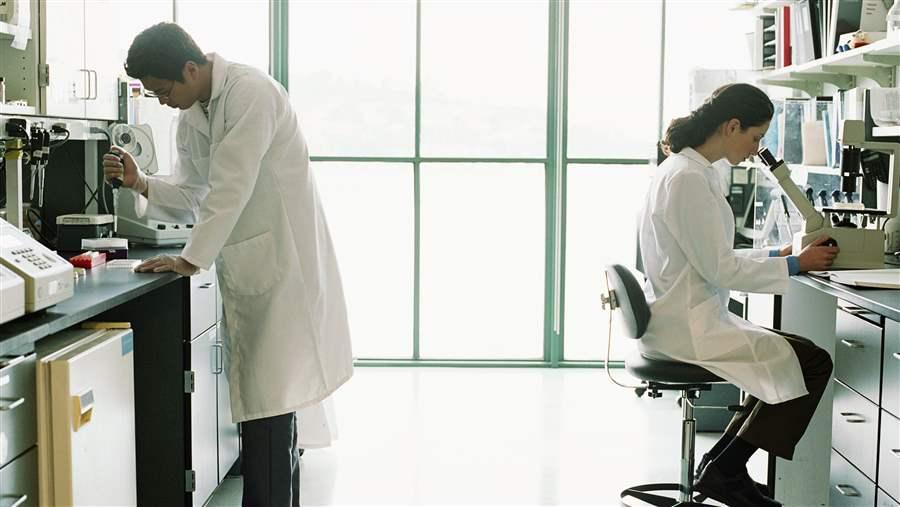 Such targeted efforts are critical to the ongoing search for novel solutions to this complex and devastating disease.

Two Pew scholars worked together to explore the roots of aggressive cancers, and published their findings in the May 26 issue of Cell Reports. Agnel Sfeir, a 2014 Pew-Stewart Scholar for Cancer Research at New York University’s Langone School of Medicine, and Eros Lazzerini Denchi, a 2011 Pew scholar at the Scripps Research Institute, discovered that when two proteins (POT1 and p53) malfunction at the same time, it accelerates cancer cell growth, triggering a particularly destructive disease.

Sfeir studies telomeres, short DNA sequences that protect the ends of our chromosomes from harm. Denchi studies the ways in which DNA damage can accelerate cancer growth. Together, they examined how genetic mutations in the telomere protection protein POT1 can drive tumors to spread. POT1 protects telomeres, the ends of our chromosomes, from damage. When there’s a glitch in POT1 function, cells should self-destruct to prevent passing on damaged genes; however, this does not always happen. Recent studies have identified POT1 mutations in several cancer types, including forms of leukemia, glioma, and melanoma, indicating that not all cells with POT1 mutations die, but some instead allow for the formation of tumors.

Sfeir and Denchi found that mice with POT1 and p53 gene mutations quickly developed T-cell lymphomas that spread rapidly and invaded the surrounding tissue. They also noted genetic aberrations in the tumors of mice with the dual mutations. These cancer cells had elongated telomeres, with chromosomes that were fused and rearranged—which can ultimately lead to widespread genomic instability and the accumulation of detrimental mutations. Together, the scholars connected the dots to conclude that these two mutations were working in concert to evade normal cellular death mechanisms and fuel cancer cell growth. These findings shed light on how cancer cells circumvent normal cellular protection mechanisms, and also highlight the need for alternative methods to combat them.

Denchi and Sfeir’s work identifies specific therapeutic targets for tumors with POT1 mutations, providing researchers with plausible strategies for killing malignant cancer cells while sparing healthy tissue. Such targeted efforts are critical to the ongoing search for novel solutions to this complex and devastating disease.