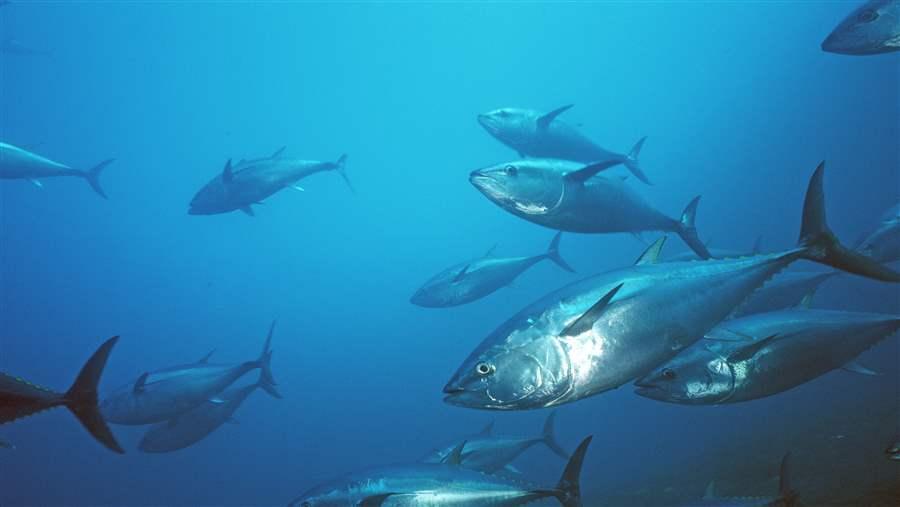 Members of the Inter-American Tropical Tuna Commission (IATTC) must do more to follow through on critical commitments to protect tuna and shark populations in the eastern Pacific Ocean. The IATTC, the world’s oldest regional fishery management organization (RFMO) for tuna, meets June 27 to July 1 in La Jolla, California.

According to a recent Pew analysis, IATTC members have made only limited progress in implementing the basic, precautionary fishery management standards laid out in the United Nations Fish Stocks Agreement (UNFSA), which has been in force since 2001. The result: Several populations of important migratory marine species are overfished and struggling to recover.

The latest science estimates the Pacific bluefin tuna population at just 2.6 percent of unfished levels. Current management measures have almost no chance of leading to healthy population levels in the near future. The text governing the IATTC requires members to adopt precautionary, science-based catch limits. Still, there is no such plan in place for bluefin tuna, and no measures that would accomplish this have been proposed.

While most bluefin is caught in the western Pacific, the population as a whole needs effective, science-based catch limits and an appropriate long-term rebuilding and management plan throughout its range, including the eastern Pacific. This must include a reduction in commercial catch limits of at least 20 percent from current levels to end overfishing immediately, as well as an equal cut in recreational catch. IATTC members must agree to implement a Pacific-wide, long-term recovery plan that has at least a 75 percent probability of returning the Pacific bluefin population to 25 percent of its unfished size by 2025.

Parties to the UNFSA are obligated to manage highly migratory and straddling fish stocks on the high seas, including sharks, and to consider the entire ecosystem, including the effects on shark populations, when managing tuna fisheries. But Pew’s analysis found IATTC members have not taken sufficient steps to protect sharks and rays.

IATTC members can advance both regional and global protections this year. Forty-nine nations, including Panama and the member states of the European Union, support a proposal to list silky sharks on Appendix II of the Convention on International Trade in Endangered Species of Wild Fauna and Flora (CITES) at the Conference of the Parties this September. That designation would require that all international trade in these sharks be legal and sustainable. In 2013, the parties to CITES recognized the need to protect scalloped, great, and smooth hammerhead sharks, adopting proposals to add them to Appendix II. Both Panama and the EU are members of the IATTC.

At this year’s meeting, IATTC members must act to prohibit the retention of biologically vulnerable shark species in the convention area, particularly silky and hammerhead sharks. Fisheries managers also need to limit the mortality of other shark species—such as blue, thresher, and shortfin mako sharks—to sustainable levels.

IATTC members have made some progress in efforts to enforce compliance with conservation and management measures to end illegal fishing. The Commission has agreed to some standards for requiring vessels to have unique ID numbers and to use satellite tracking, but improvements are needed to close loopholes that allow some fishing boats to continue to engage in illicit fishing.

Meanwhile, the IATTC has not yet set minimum standards for port inspections. The Port State Measures Agreement, a United Nations treaty, recently entered into force after ratification by 30 governments, including Canada, Costa Rica, the European Union, South Korea, and the United States, all IATTC members. Regional cooperation enhances authorities’ ability to stop illicit trade at ports.

Governments that have not done so should ratify and implement the PSMA, and the Commission also should adopt minimum standards for inspections in line with the PSMA by the end of this year.

Pew’s complete recommendations to the IATTC can be found here.

Time may be running short for several eastern Pacific populations of migratory marine species, but effective, science-based actions can help reverse declines and foster the growth of responsible, sustainable fisheries. Members just need to find the political will to get the job done.