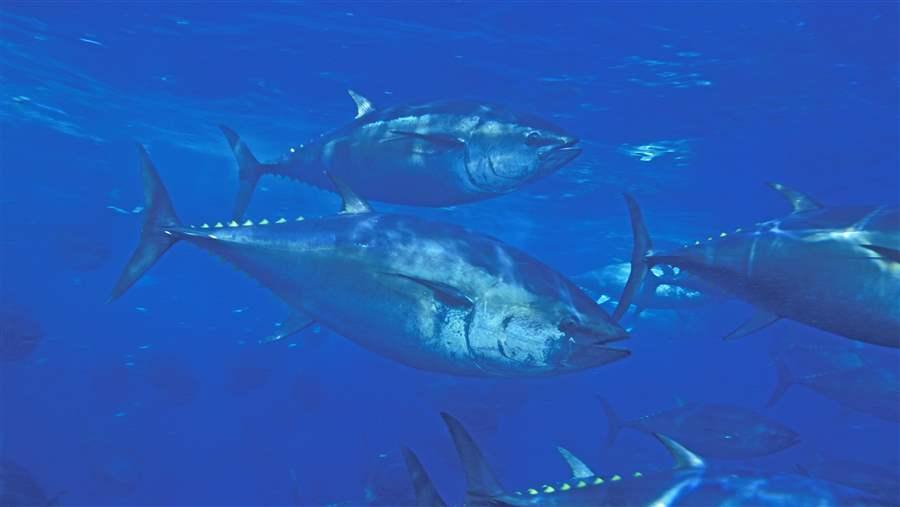 Overfishing has depleted the Pacific bluefin tuna species by more than 97 percent.

As one of the world’s largest fishing nations, the United States has an important role and responsibility in sustainably managing its fisheries in domestic waters and on the high seas. While the U.S. has rebuilt many fish populations within its waters and contributes to better international management of fisheries, the recent guidance on Pacific bluefin calls into question its commitment to protecting and rebuilding this troubled species.

By now, the story of Pacific bluefin tuna is well known. The latest science shows that nearly a century of overfishing has decimated the species, and the population is at just 2.6 percent of its unfished level. Still, fishing continues at a rate more than 20 percent above what is considered sustainable. Projections show that under the management measures now in place, there is less than a 1 percent chance that the population will recover to a healthy size by 2024. The best-available science is very clear: Pacific bluefin will not recover without additional help.

In recent years, the U.S. government has provided that assistance. In the eastern Pacific Ocean, where young bluefin spend a portion of their early years, the U.S. led the push to reduce commercial catch limits and to lower the number of fish that recreational fishermen could catch on each trip. U.S. representatives at international management meetings have been clear about the need for long-term measures to assist in the species’ recovery.

That’s why it is so concerning that the West Coast regional office of the National Oceanic and Atmospheric Administration recently published a piece promoting consumption of Pacific bluefin tuna. In the story, the agency calls the fishery "sustainable" and encourages consumers to “look to the local retailers for fresh Pacific bluefin tuna.”

However, in the piece NOAA conspicuously omits critical information, notably how severely depleted the population has become;  that fishing across the Pacific remains significantly above the levels required for rebuilding  the species; and that U.S. fishermen are not bound by the recovery plan instituted in the western Pacific Ocean. The piece includes no recognition that fishing under current regulations is directly contributing to the severely threatened status of the species.

NOAA Fisheries also recently updated its official seafood website to highlight Pacific bluefin tuna as a "smart seafood choice," promoting its "distinctive flavor" and “high fat content.” It does not mention that overfishing has depleted the species by more than 97 percent. All stakeholders need complete information when deciding which fish products to buy. The release of incomplete statements does a disservice to those who catch, sell, buy, or care about the health of tuna in the Pacific Ocean.

The United States, along with representatives of 20 other governments, will meet in La Jolla, California, in late June to discuss management measures for Pacific bluefin. This is the first time that they will gather since the release of the latest stock assessment showing how greatly depleted the species has become.

The meeting of the Inter-American Tropical Tuna Commission, which regulates tuna fishing in the eastern Pacific, provides an opportunity for the United States to reconfirm that it will continue to be a real champion for Pacific bluefin.

The U.S. should focus on approaches that will help reach international agreement on a plan to immediately end overfishing and establish measures to restore the population to healthy levels that will support a sustainable fishery well into the future. Otherwise, it may be time for the international community to consider other steps such as a moratorium on commercial fishing until such a plan is in place.