American families face substantial and growing challenges in trying to build retirement savings. Private sector workers today typically accumulate the bulk of their retirement funds in employer-sponsored plans, but only 58 percent of workers have access to a plan and 49 percent participate. In addition, less than 10 percent of all workers contribute to a plan that is not job-based. The failure to save enough—or save at all—has an impact on workers later in life and on all taxpayers.

To address this critical problem, many states are exploring programs to help private sector workers save for their later years. Pew recently analyzed efforts underway or under consideration in 25 states. It found that state objectives are consistent: They want to increase retirement savings and reduce poverty among retirees to reduce social assistance spending that strains state budgets. At the same time, policymakers seek to ensure that new programs can be implemented successfully, impose minimal burdens on employers, protect retirement savings, and are cost-effective and sustainable.

Generally, states have taken one of three approaches: A state can sponsor and administer a plan governed under the Employee Retirement Income Security Act (ERISA), the federal law that governs pensions; it can work within the current voluntary employer-based system without sponsoring a state plan; or it can create a state-based plan that may not be subject to the federal pension law. 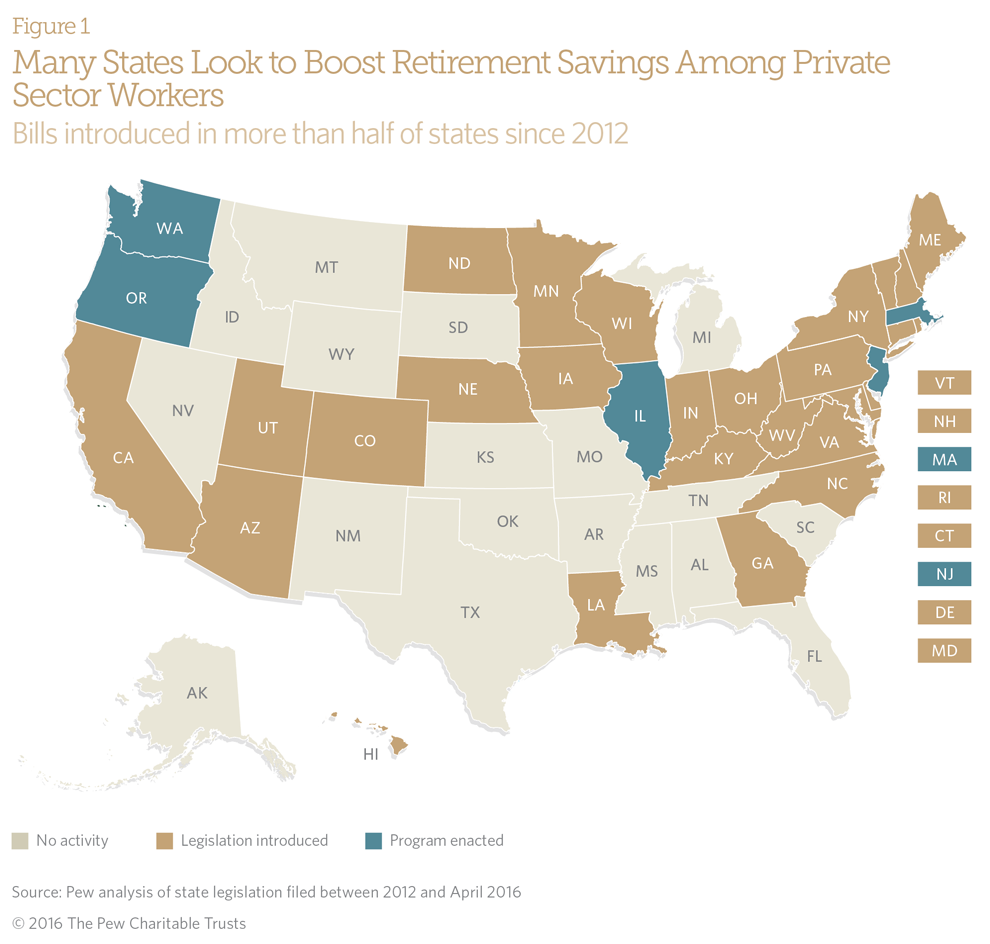 Most legislation on state-sponsored retirement plans for private sector workers is being designed to avoid ERISA. In general, ERISA provides important protections for plan participants and their beneficiaries.  It requires that participants receive information, including facts about plan features and funding; sets minimum standards for participation and vesting; imposes fiduciary responsibilities that require sponsors and providers who have control over plan assets to act in the best interests of participants; and gives participants the right to sue for benefits and breaches of fiduciary duty.

Some legislators fear that ERISA would require the state, the plan, or participating employers to take on too many responsibilities or be subjected to unwanted liability. Many employers who do not offer retirement plans cite worries about the costs, legal and administrative burdens, and potential liabilities of doing so under ERISA. Still, states pursuing this approach are attempting to provide protections similar to those offered by an ERISA plan.

A non-ERISA program might require all employers meeting certain criteria to offer a retirement plan for their workers or to enroll employees in the state’s automatic enrollment payroll deduction individual retirement account, what is known as an auto IRA plan. For example, the Secure Choice program in Illinois that takes effect in 2017 will cover employers with 25 or more workers who do not offer plans. Connecticut, Oregon, and Maryland have enacted similar programs.

In these state auto-IRA plans, employers must process the enrollment and payroll contributions of their workers but otherwise have minimal involvement. Employees are automatically enrolled in the programs, starting with contributions at a specified amount of pay, though they can adjust their contributions or opt out altogether.

Recent guidance from the U.S. Department of Labor made clear that states can operate ERISA-governed plans that cover many nongovernment employers. These are typically what are known as prototype plans or multiple employer plans (MEPs). With a prototype plan, a state would offer a standard plan design for a 401(k) or other retirement plan to employers, who then could tailor it to their needs by choosing among options, such as contribution rates. MEPs provide a single plan that covers a group of unrelated employers. Prototype plans and MEPs can both achieve efficiencies and economies of scale that help reduce costs.

Each employer who adopts the prototype is sponsoring an ERISA plan. That means employers would assume the fiduciary obligations associated with sponsorship of any ERISA-covered plan, though the state or a designated third party would assume responsibility for most administrative and asset management functions.

Massachusetts is implementing a prototype plan for small nonprofit organizations. Each participating employer will maintain an ERISA-covered defined contribution plan, which becomes more affordable because the state treasurer administers contributions and investments.

MEPs also fall under ERISA. A state that sponsors a MEP would be the plan fiduciary, responsible for operating the plan, communicating with employees, selecting service providers, paying benefits, and performing other plan services.

In a third approach, states can encourage—but not require—business owners to adopt retirement plans. Many owners and executives may not be familiar with available retirement programs, and plan providers say it’s often difficult to reach small businesses with their product offerings. To help, New Jersey and Washington state have enacted marketplace exchanges.

A marketplace might be preferable in states where policymakers have concerns about requiring participation by employers and employees. States create websites where financial service providers market retirement plans. The states can set criteria for providers who then present their plans in formats that allow for easy comparison shopping. Employers could receive tax breaks or other incentives to adopt a plan, while employees could receive incentives to participate.

Given the range of possible approaches, policymakers interested in boosting private sector retirement savings will have to identify and set priorities that balance risks and trade-offs. To do that, they will need to take into consideration the specific economic and demographic characteristics of the workers who could participate in these plans. With careful decision-making, states can significantly improve the retirement security of many working Americans while minimizing costs to taxpayers.