The Consumer Financial Protection Bureau (CFPB) has proposed the first federal rules on payday loans, which 12 million consumers use every year. However, the proposal falls short because it would allow payday loans with 400 percent interest rates to flourish while locking out lower-cost loans from banks. To correct this problem, the CFPB should ensure that its final regulations include effective, pro-consumer product safety standards, such as limiting loan payments to 5 percent of a borrower’s paycheck. With a few strong fixes, the bureau could create a policy that protects millions of hard-working Americans.

As proposed, the CFPB’s approach would lead to major changes in the market for payday and similar loans, notably by accelerating the general shift toward installment loans that consumers pay off over a period of months instead of weeks. However, the prospect of harmful loans would persist because the proposed rule would leave lenders free to charge any rate and set almost any term as long as they make a “reasonable determination” that the borrower can repay the loan. Under this vague directive, payday lenders are in the driver’s seat, because the rule would allow them direct access to borrowers’ checking accounts or, in the case of auto title lenders, grant them the power to repossess vehicles.

As drafted, the CFPB rule would allow lenders to continue to make high-cost loans, such as a line of credit with a 15 percent transaction fee and 299 percent interest rate, or a $1,250 loan on which the borrower would repay a total of $3,700 in fees, interest, and principal. These and many other high-cost payday installment loans are already on the market in most states, and they will thrive if the regulation takes effect without changes.

Not surprisingly, payday lenders have heralded the bureau’s approach, with one saying that it “supports the [CFPB] efforts to provide a well-regulated market for consumers” and another declaring that “the upcoming CFPB regulations will help both consumers and lenders and should be expedited without any further delays.”

Unfortunately for borrowers, the CFPB’s latest proposal could delay or even remove the “5 percent payment option,” which would protect consumers and support price competition in the marketplace. This evidence-based option would limit monthly installment payments to an affordable 5 percent of a borrower’s paycheck, give customers a reasonable amount of time to repay their loans, and allow banks to offer small loans at prices six times lower than the payday installment loan structures that would remain legal and widely available under the CFPB’s proposed rule. 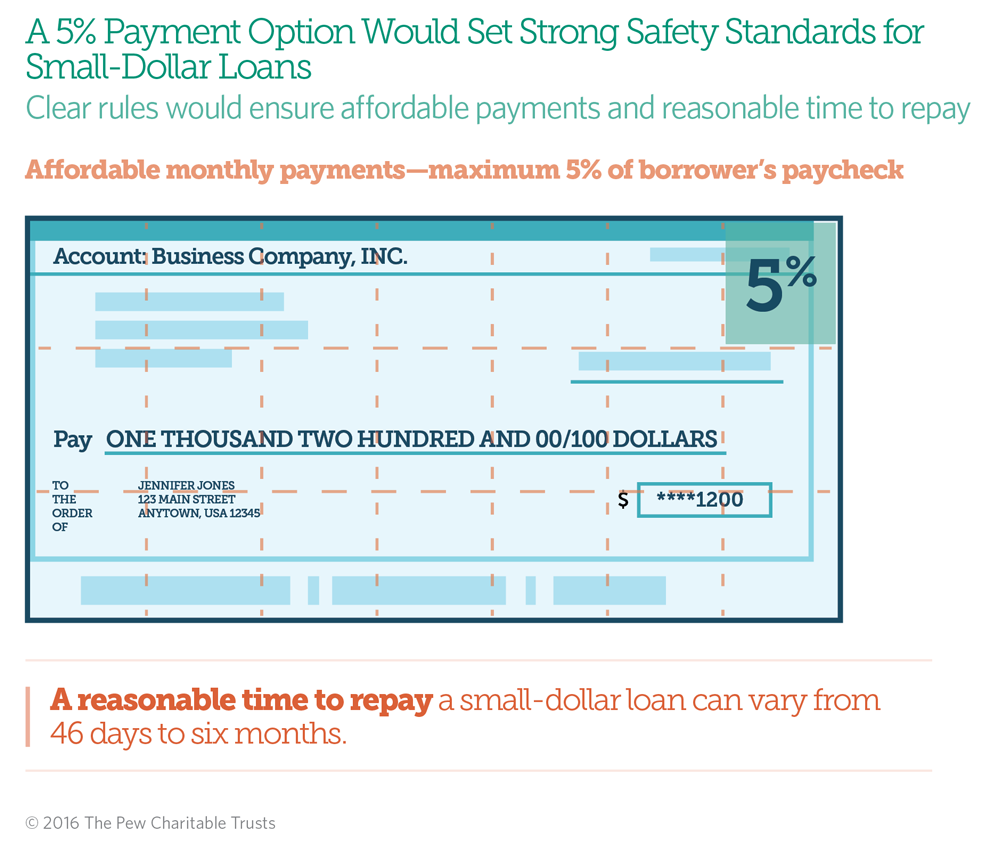 To get a payday loan, borrowers must have checking accounts and income, so they already are bank customers. But financial institutions have lacked clear guidelines from regulators that would allow them to serve these customers’ credit needs at a fair price. Before the CFPB announced the draft rule, at least three large banks were already preparing to use the 5 percent payment option to make small loans at prices far lower than those charged by payday lenders. By placing clear product safety standards such as the 5 percent payment option in limbo, the bureau has jeopardized the only part of its original framework that could save millions of borrowers billions of dollars. For example:

Pew’s research shows that 3 in 4 Americans favor stronger regulation in this market, and the vast majority of borrowers agree. Nationally representative surveys, 22 focus groups with payday and auto title loan borrowers around the country, and studies of consumer experiences under applicable state and local laws clearly show that borrowers want small installment payments, lower prices, and quick loan approval. Unfortunately, the CFPB’s proposed rule goes 0 for 3 on these goals. 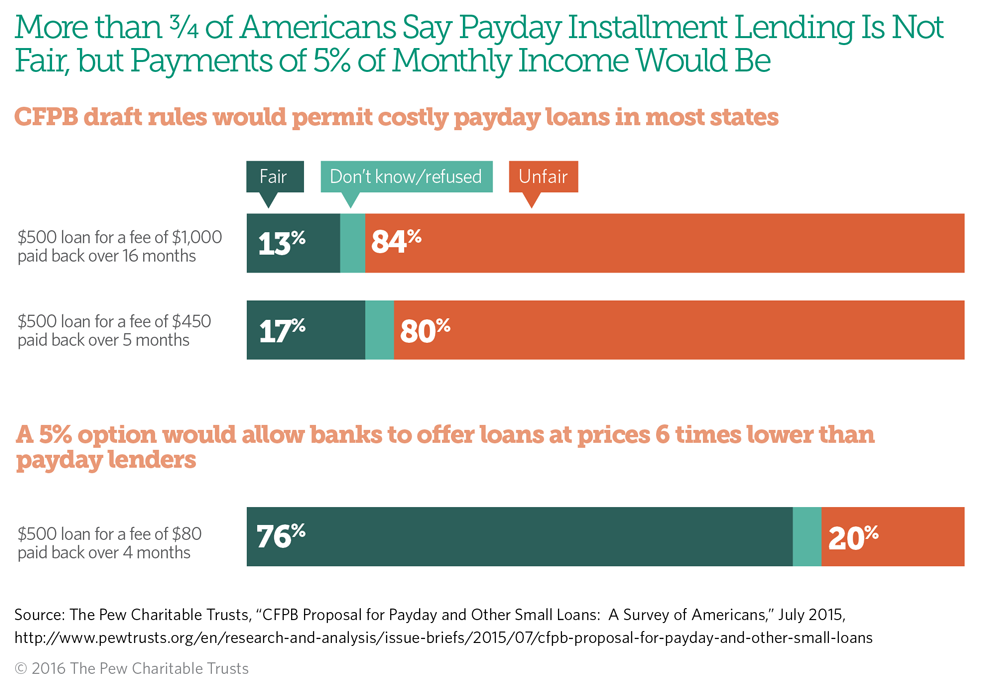 If the CFPB improves its draft rule, payday loan borrowers will gain access to affordable credit from banks and save billions of dollars. Otherwise, they will be left with 400 percent interest payday installment loans.

Pew has conducted extensive research on the high-cost small-dollar loan market over the past five years. The findings show that although these products offer quick cash, the unaffordable payments lead consumers to quickly take another loan to cover expenses.

Pew has conducted extensive research on the high-cost small-dollar loan market over the past five years. The findings show that although these products offer quick cash, the unaffordable payments lead consumers to quickly take another loan to cover expenses. Twelve million Americans take out payday loans each year, spending more than $7 billion on loan fees.